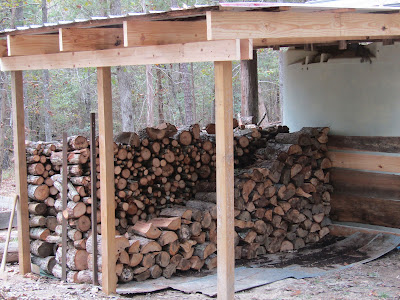 Hello, friends.  Last week, I picked lima beans, peppers, eggplant, tomatoes, tromboncino squash, green beans and lettuce.  J cut more firewood after work one evening.  Some time back, I bought several pillows from thrift stores, intending to recover them.  This week, I got around to sewing the covers.  I had to piece together fabrics to make it work, but I'm happy with how they came out.  The fabrics were all on hand, including chenille a friend had given me, used for two of the backs.  The other fabrics were thrifted.  I turned one of the pillows around in the pic, to show the chenille.  It seemed a soft and appropriate fabric for a day bed.  They're simple envelope covers, made using these instructions. 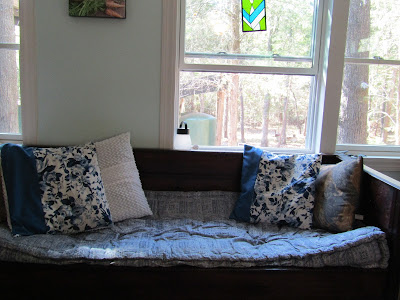 I went with a friend to an antique mall where friends had booths, but bought nothing there except a locally made lip balm for J.  After that, we stopped at two thrift stores, where I purchased a cotton sheet ($2), two very thick, high quality like new cotton towels ($3.50 ea), a cashmere sweater ($3.99), and a fleece vest ($3.50).  I finally got around to planting some lettuce seed in the cold frame beds, though it may be too late for them to do well.  We're eating from the bought lettuce plants, though they've all bolted and are a bit bitter.  This is the first time we've had fall lettuce bolt, but then, it's been an unusual year.  I picked up two library books, and have been enjoying them.

The rain water was low, so I went to the laundromat.  I brought some lima beans to shell while waiting there, and had a nice conversation with a gentlemen and a little girl.  I shared shelled beans with the man, and the little girl wanted some unshelled ones to take home.  Neither her mother or grandmother had gardens, but we talked about how she might plant them.  I brought the laundry home, and hung it on the line.  I've been dealing with a check engine light on my car for several weeks.  After I had them diagnose the code at the auto store, J suggested I run fuel cleaner, and then a tank of premium gas.  The light came back on, so he replaced the part the store suggested, which he found online for 1/4 of the cost the store was selling it for.  The light came back on, and another diagnosis gave the same code, so J suggested I change the gas cap, and after several days, the light came back on again, but then it quickly went off again, and stayed off through an entire tank of gas. Here's hoping it's fixed.

One evening, J  & I transplanted some collards and cabbage we had grown from seed.  We also planted a bed of winter salad mix.  Soon, I need to harvest the turmeric, which I plan to use for dyeing fabric.  I prepared the last of the green beans (the rest are growing out for seed), a salad with our lettuce, cucumbers, and pepper, and made fritters with leftovers.  This time, I used the last of the eggplant spread, a squash, tomato, onion & basil dish, and lima beans which were mashed first.  They turned out pretty well.  I saw the last hummingbird on October 1, so believe they've flown for warmer climes.  A batch of yogurt was made.  After an appointment, I visited three thrift stores in that town.  A cashmere sweater and fleece vest were $6, a pair of pants for J was .50, and I found two vintage brown transferware plates to add to my fall dishes for $2 ea.  We've had too many commitments this fall to have a hayride, but these will be used for future hayride meals. 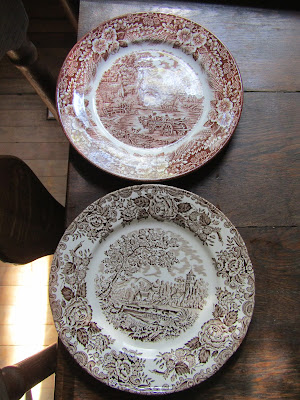 I stopped at a local garden center, and bought a dozen pansies.  A dinner of Pasta Norma was made, with our eggplant, tomatoes, garlic and herbs.  The chicken coop was cleaned, and mint was harvested to put in the coop.  The coop cleanings were put on a pile, and will be added to the garden in the future, once it's had time to break down some.  I planted the pansies, some next to the walk by the house, and others near where I park.  Most of the tomatoes being harvested are pretty small, but there were three that were of good size, so I made caprese salad, to go with the leftover Pasta Norma.  Did the usual composting, washing plastic bags for reuse, and shredding paper and cardboard to add to the compost.

On Saturday afternoon, we headed out of town for J's 40th HS reunion.  Before we left, J finished up the last of three orders, and I cleaned and powder coated them.  One order was a custom stand, built for a couple that wanted to secure it in their RV.  There are tabs in the back, which are not visible in the pic.  We love working with customers on specialty items.  I had picked around 1/2 of a 5 gallon bucket of lima beans on Friday, and took them along to shell while we were on the road.  The reunion was 2 1/2 hours away and at night, so we booked a room at a B&B, which was lovely, and the innkeeper is interested in my soap for her B&B.  We arrived home to some blessed rain, which we're so thankful for.  The lettuce and winter greens are coming up nicely.  Soup was made with our tromboncino squash, tomatoes, garlic, basil and homemade broth.  Have a great week, friends.

You've certainly found some bargains of late! I love thrifting too.

I'd love to know more about how you harvest the turmeric, as it is the first time I am growing it.

Wasn't that rain spectacular? We got almost an inch with more on the way tomorrow! Just in time for my lettuce seeds!

It's my first time growing turmeric too. I'm thinking I'll just pull it up like carrots, but may need to research it before I do. Yes, so happy for rain!

I just planted some collard green seeds in my garden last week. I don't know if they will make it. Only one had come up that I had planted earlier so I bought $.50 worth at the feed store. I figured it was worth the money to experiment. If I get one plant producing one leaf, it will be cheaper than the local grocery stores.
Jeannie@GetMeToTheCountry