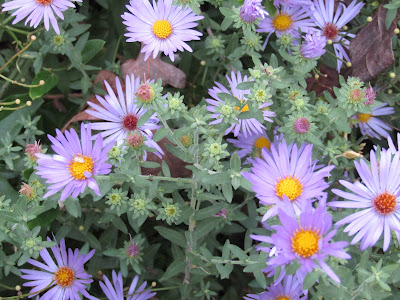 Hello, friends.  Last week, I didn't do a good job keeping up with what I did during the week, so let's see what I can remember.  I took a free mushroom class with a friend, which included a mushroom walk.  I learned quite a bit about one I'd been interested in, which grows in abundance in this area.  Afterwards, we had lunch.  I tried my first Banh Mi (vegetarian) sandwich, which was delicious.  We then stopped by a thrift store, but I didn't find anything I needed. 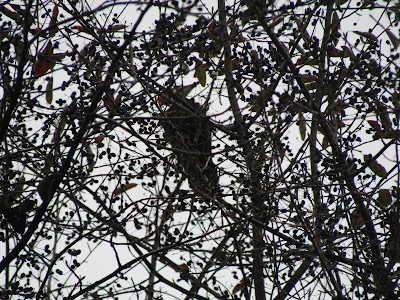 We often hear them on our land, but don't catch sight of the pileated woodpeckers very often.  One day, I happened to see one up high in a sourwood tree, eating the fruits.  It's not the best photo, but the best I could get of it.  I brought all the house plants indoors for the cold months, as it got down to 39 a couple of nights.  Due to a recent recommendation from Susun Weed, I gathered a jar of mint, covered it with local honey, and will let it sit 6 weeks.  Then, just put a generous spoonful with boiling water in a cup, and you've got quick and easy herb tea.  I thought it sounded like a great idea, don't you? 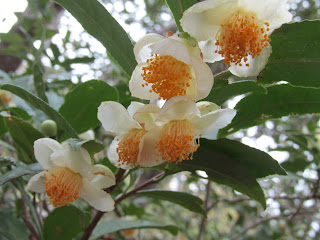 Our tea camellia is in flower, which makes lots of pollinators happy.  Laundry was hung on the line.  For a dinner, we had pasta with tromboncino squash, tomatoes and basil.  My music friend and I went to a concert in Raleigh over the weekend.  We went to a nearby store in search of a gift I wanted to get.  They had just sold out, but I found another similar item that will work, as well as a few more holiday gifts.  I received a 15% discount on my order for joining their mailing list.  At Marshall's, I bought a few household items, and some more gifts.  We took advantage of the free water and breakfast at our hotel before heading home. 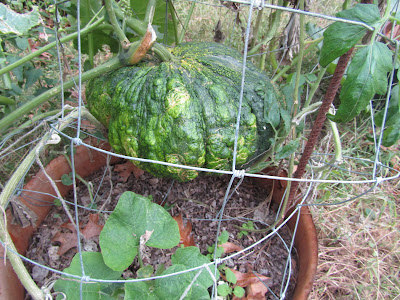 We have some really unusual, well downright wonky, winter squash this year, which came up from the compost in the tomato barrels.  The thinking is they are some sort of cross.  Hopefully, they will be delicious.  Saturday night, I had a wonderful meal, including the most delicious autumn succotash.  I was hoping to use some of our winter squash this way, and was delighted to find the recipe.  I wasn't sure I'd like it when I ordered it, but the boiled peanuts still had crunch, and it was a great combination.  J, who is a boiled peanut fan, tells me green peanuts are in stores this time of year.  I'll be keeping my eye out for them.  After unpacking, I checked the garden, and gathered two eggplant, a cucumber, and several tomatoes.  I was a little discouraged that all the tomatoes were split from the overnight rain or had been chewed on by something, but J reminded me that harvesting tomatoes at all this time of year is a pretty good thing.  Wishing you a most bountiful week.

I love the idea of an instant tea like that. There are so many things like that I would like to try, but don't seem to find the time.

Yes, that squash is peculiar, but at least you are still harvesting!

The rain was a true blessing. We got almost 2 inches over the weekend.
Enjoy your week!

I'm looking forward to trying that tea. I guess if the wonky squashes are especially not good tasting, the chickens will be happy to gobble them up. It seems the weather pattern has shifted, with more rain in the forecast this week. Yay!

I figured out why my tromboncino never formed any squash - all the blooms were male! Isn't that odd? It was covered in blooms but when I checked closely, not one was female. I suppose it was also some kind of cross but it is definitely the end of the line for this one.
Jeannie@GetMeToTheCountry

Well, that's a bummer. And yes, odd too.