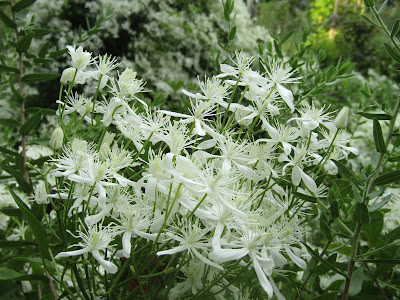 Hello, friends.  Last week, I foraged some lovely chanterelles.  We've been getting some nice rain, which is helping the mushrooms come out.  After work on Tuesday, I picked up a few groceries, including .99 avocados and bags of dog food on sale for $4 less than usual.  I also stopped to get a few lettuce and parsley plants.  I was focused, and didn't even check out the mark down section :o).  The goji berries finally began blooming last week.  Hopefully, there is time to get some fruit before first frost.  I canned squash, and made Pasta Norma, which used our eggplant, tomatoes, garlic, basil, oregano and chives.  A double batch of hummer food was made twice.  The hummingbird numbers have increased dramatically, so I'm thinking they must be close to migrating.  They're going through lots of food.  J noticed storm clouds gathering, so grabbed the laundry on the line.  Three pairs of his work pants were still slightly damp.  I threw them over chairs instead of using the dryer.

A batch of tomatoes was canned.  One of my nieces came for a visit.  She went on the morning hike with the pups.  I fixed breakfast when we returned, and introduced her to pawpaw, which she liked. I gathered seeds of carrot and kale, and found that kale had reseeded in our old cold frame.   A neighbor gifted us a large bag of corn.  Six ears were boiled, and the remainder were used in a corn zucchini chowder, which was delicious.  The chowder also used a tromboncino squash, as well as our potatoes, garlic and thyme.  It was as pretty as it was yummy.  Several figs were harvested, and enjoyed fresh.  The loofahs have begun blooming.  I'm pretty sure it's too late to get any viable loofahs, but the pollinators seem to be enjoying the flowers.  Another new recipe was tried, Lentil Salad with Cucumbers and Olives.  It's a keeper too.  I'm so enjoying the cooler temperatures, and having the windows open again. 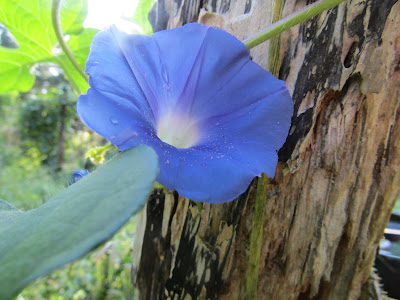 On Saturday, we planted a good part of our fall garden... collards, cabbage, broccoli, kale and lettuce plants.  There are also collards that have come up from seed, though they're small yet.  I also planted the moonflowers.  In planting the mystery yellow flowers, I found that there are indeed spirea in with them.  So, I got two for one in those pots.  After making and painting 5 orders on Sunday, J & I worked on our solar hot water system.  Conduit was laid in a trench, and the lines fished.  A few things were hooked up, but I can't remember the names at the moment.  Last week, he was given a heat exchanger that was no longer in use from a job he was working at.  It will work perfectly in our system.  Lemon balm and lemon verbena were harvested and dried for tea.  I know I'm forgetting some things, but it's been a bit of a whirlwind lately.  Wishing you a lovely week ahead.

That's good to know about the hummers. I will make them some extra food today.

I was able to tidy up a couple of beds this weekend, but haven't yet planted. You're way ahead of me! Hasn't the cool change been wonderful?

I hope you have a fabulous week!

The cooler temps are wonderful, Daisy! I did a small amount of weeding here last week, but there's so much more that needs doing. Hoping I make some progress this week.

I am loving the cooler weather! We had a few more hummers this year than last. It's so much fun to watch them.

I love watching them too, Michele. Little bundles of energy.

I have lemon balm for the first time this year. When you dry it for tea, do you put it in some sort of teabag? About how much for a cup of tea? Thanks for the help. Christine

Hi Christine. I got the idea from an herbalist friend, who gifted me a bag of lemon balm, lemon verbena and lemongrass loose tea. I made a half gallon at a time, and used it chilled this summer, and used a large handful for that. After steeping, I just strained it through a sieve. I'm not sure per cup of tea, but I would err on the side of more, as you can always add water to dilute it, but can't do much if it's not strong enough. You could use a tea ball or a sieve, or tea bag. I've not tried the tea bags. Enjoy your tea!

I think you are right about the hummingbirds. I am filling two feeders up twice a day! We checked the bottom of the feeders to make sure they weren't leaking. Thank goodness I got the sugar on sale or they would be bankrupting us. My neighbor in the closest house to us used to have feeders up. Since they have moved, I think all of them are coming to my house.
Jeannie@GetMeToTheCountry