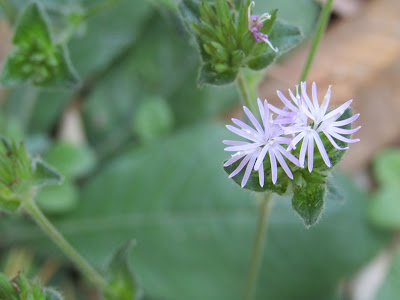 Hello, friends.  On Monday, I gathered purslane and basil, and made a triple batch of purslane pistachio pesto.  We enjoyed it with pasta two nights.  I made a double batch of granola.  This time, I had pumpkin and sunflower seeds, and added those too.  After working in town, I stopped at the discount grocery and got organic beans, canned corn (for the chickens), & cans of olives for .50 ea, and organic juice $1 ea.  I got a 6 pack of LED votive candles for $5, and saw a used pack of this brand for $16.50 on ebay.  I dropped off a box of books at the Friends of the Library store.  There were several antique books, including one from 1886.  I hope they'll be able to make some decent money from them.  At Aldi's, I picked up cherries @ $1.89/#, avocados .69 ea., and mangoes .49 ea., and bought a pack of their meatless crumbles to try for $3.49.  Not inexpensive, but we like to have sloppy joes occasionally for a quick meal.  I had hoped to pick up some things at the Farmer's Market; some tomatoes, and maybe corn and peaches, but a deluge sent them all packing before I could get there.

I was gifted 4# each of pinto beans and brown rice, and 6# of navy beans.  I transferred them all to glass jars.  I shared a bag of garden produce and eggs in kind.  Almost all the remaining sweet potatoes from last year's garden were prepped and put in the dehydrator for pup treats.  I'll cook up the last few for us.  We were blessed to get an inch of rain and cooler temps.  The house was opened up for the first time in weeks.  We should be able to open up each night for several days, before it heats up again.  A can of corn was frozen into cubes for the chickens, for the next heat wave.  I made "zucchini" tots with our first tromboncino squash, which also used our eggs and herbs.  I'll be making them again.  I sliced the last of the gifted tomatoes to enjoy with it, a Cherokee Purple, and heated leftover grilled corn.  So yummy!  A load of laundry was hung on the line.  I used homegrown mint in making a batch of soap. 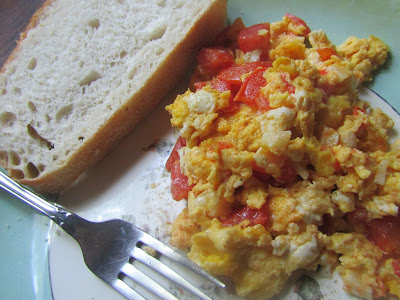 Homemade salad dressing was made, and garden cucumbers and tomatoes were enjoyed in a salad.  Cabbage and noodles was made with some more of the gifted cabbage, but there's more left.  The gift that keeps on giving :o).  Now that we have lots of cherry tomatoes, I was reminded of a favorite breakfast my Sicilian grandmother and my Mom used to make.  Saute some garlic, throw in chopped tomatoes, then add eggs.  The bread was local sourdough.  All else but the oil and salt were homegrown.  I've started noticing hazelnuts dropping, and have begun gathering them.  I tried a new recipe, for Lemony Cucumber Couscous Salad.  It just so happened I found a bag of Bob's Red Mill tricolor couscous at the discount store for $2  the last visit.  The recipe was excellent, and leftovers were just as good.  It's a Budget Bytes recipe.  Most of Saturday morning was spent picking lima beans.  That night, J & I shelled them while we talked.  We ended up with a gallon of beans.  The shells almost filled a 5 gallon bucket. I decided to cover them with water, for a future dyeing experiment.

Elderberries were harvested, and a second batch of tincture was started.  I recently found out about a local hiking group, created to promote health in the community.  They hike in various areas throughout the Uwharrie National Forest, which I've been wanting to learn more about.  I've known there are various trails, but have never known where the trail heads are, so was happy to learn about this group.  I asked a niece if she'd like to join me on Sunday.  We walked on private land along the Uwharrie River.  There were interesting wild plants, one of which I didn't know, and need to research.  After we returned, I dropped off orders at Fedex, then headed to Big Lots with a $5 off $15 coupon.  I found my favorite egg noodles marked down to 1/2 price (not sure why, as the same noodles with a closer best by date were on the regular shelf full price??).  Also found was organic juice for $1.75, which is $3.99 in the grocery stores.  The last stop was Aldi's, where I picked up 3 things, including organic strawberries for $2.79/#.  The day was a lovely end to a good week.  Wishing everyone a good week ahead!

That park is one on my list to visit. Perhaps in the fall we will get there.

Between Aldi, Big Lots, and the discount store, I can usually find some deals. The Uwharries are usually beautiful in the fall, unless we have a bad drought that year.

What a busy week! You have accomplished so much.

We were able to try Cherokee Purple tomatoes recently and was surprised at the great flavor. Now I wish I had planted more than just one.

Basil pesto made with pistachios? It sounds delicious. I must get to harvesting my basil but there are so many beans to pick. I too LOVE lima beans.

I love that pesto! I grew Cherokee Purple tomatoes one year, and wasn't impressed, but this one was excellent.