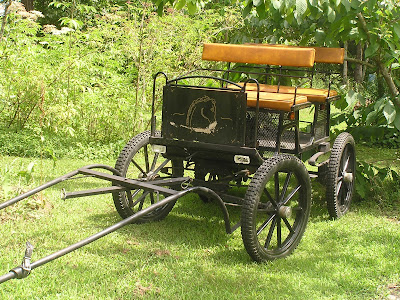 Hello, friends.  Though the guys specialize in alternative, renewable & sustainable energy in their shop, this is the first horse buggy they've repaired, for one of the local farmers.  Isn't it pretty?  I made pasta salad with our basil,  sauteed mushrooms with our oregano, and chard for a dinner.  After work on Tuesday, I dropped off three boxes of donations, and found shorts and pajamas there for our GD.  The shorts were on special for $1 ea.  I took advantage of some specials at Walgreens, including 3 boxes of freezer bags for .99 ea., normally $2.99.  At Aldi's, they had cantaloupes on sale for $1.29.  I picked a nice large one, and a few other things. 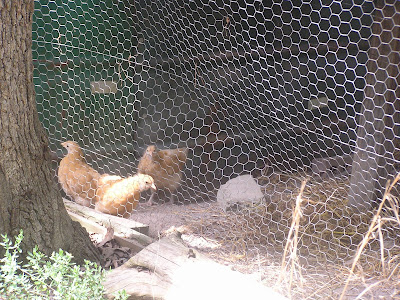 The chicks are growing, and doing well. A couple of mornings last week, while on my walk, I saw wild turkeys.  When I first lived here, I would hear them in the woods near the house, but they've moved farther back into the woods these days.  I'm happy to know they're still around.  Two loads of laundry were dried on the line.  A few months ago, a neighbor brought a 7 layer salad to dinner, which we'd never had, and we loved it. She hasn't shared her recipe as of yet, so I found one I think is similar, and made it.  We enjoyed it, though J less than me.  He'd like it on a rare occasion, while I think it'd be good on a regular rotation during hot summer days. 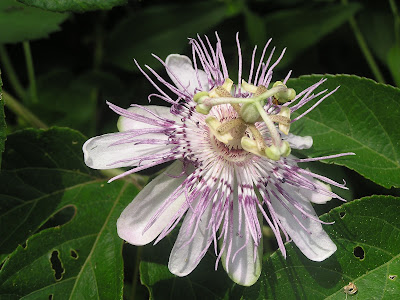 There are tiny cucumbers and tomatoes.  We're hoping to be eating cucumbers next week.  We'll have to be a bit more patient for the tomatoes.  A friend brought beautiful tromboncinos, a zucchini and green beans to us.  We're grateful to have it all, long before ours will be ready.  She also gave me 4 cases of pint jars, also appreciated.  The squirrels have gotten most of our peaches, yet again.  We have just a few left.  One was at least starting to change color, so J picked that one, which we'll let ripen in the house.  It may be the only one we get.  Here's hoping it's a good one. 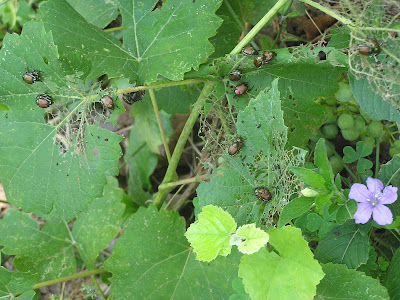 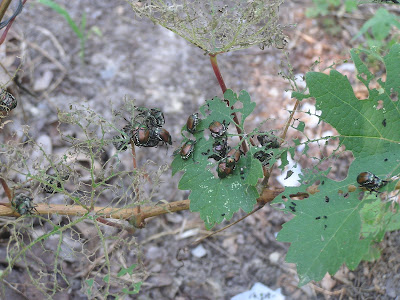 This is what we're dealing with, with Japanese beetles.  I'm so glad the chickens will eat them. Guinness got into something stinky, as he's prone to do.  I bathed him in the outdoor shower, and as I was fairly covered with dog hair, took one myself.  A biting fly did harass me for a minute, but the bird song made up for it.  I mistakenly ordered one size up for a supplement Guinness takes for joint issues, and set it on bimonthly auto-ship.  I called customer service to change it to the correct weight size, and was able to return the incorrect one for credit.  The largest tromboncino squash was used in pasta sauce, along with our tomatoes, eggplant and herbs. 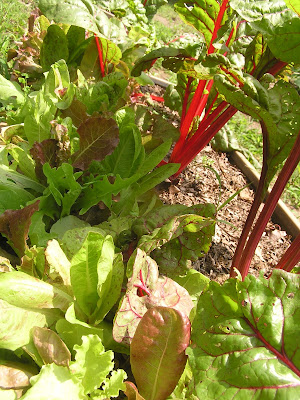 Just about every day, we're enjoying a salad.  I planted a mix of lettuces on the shadier side of the chard and basil in the raised beds, and they're doing very well there.  There are little beans, one yellow squash, and quite a few small eggplant.   I suppose it will be several weeks before we're enjoying our first cherry tomatoes.  I was delighted to see that even with the dry, hot weather, some of the loofahs have germinated. 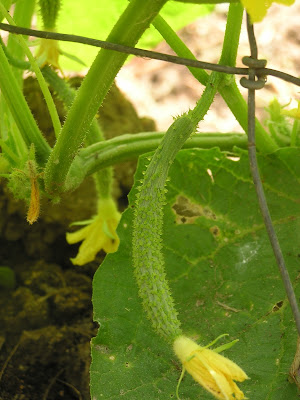 On Friday, I tackled cleaning up the kitchen island.  It always holds my to do list, and usually my phone, but it also collects papers of all sorts, cookbooks, receipts, seeds, etc.  It's where canning jars cool, and await my washing them off.  There are still a few cookbooks and miscellaneous papers, but it's as clear as it ever gets, which feels good.  I played with the new camera in the afternoon, and need to figure out how to put the pics on the computer.  Hopefully, it will be a simple process, and I'll be up and running with it.  All the photos in this post are with the old camera, which thankfully is only losing a few pics at this point. 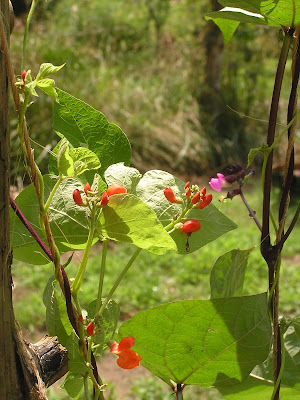 I began using a mini shampoo bottle from one of my travels.  J worked several more hours on our solar hot water, adding fittings and hooking up several more things.  It sounds very complicated when he explains all the functions.  For example, not only does the hot water need to circulate and warm the water in our hot water tank when it gets to temperature, if it gets too hot, another pump will circulate it through a heat exchanger, then send it to a radiator with a fan to cool down.  Makes my head spin trying to figure out all the details.  I'm sure glad he knows what he's doing. 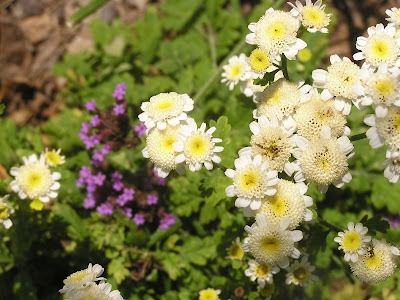 I cleaned out a portion of the pantry.  This is the area where I keep "working" tinctures and such.  I strained and bottled usnea tincture, reishi tincture, and dandelion in olive oil.  I'm deciding if I'd like to make salve or lotion bars with the dandelion oil.  I'm leaning towards the lotion bars, as I've never made any before, it seems they'd be useful, and if they turn out well, could be used as gifts.  A few drops of peppermint essential oil were put on the sponge I cleaned the pantry with, to deter future mice.  I used a $5 GC when placing an amazon order.  I made falafel using a mix, and made homemade tzatziki sauce and a salad to go along.  The cantaloupe was cut up, and chickens given the rind and seeds.  I froze another can of corn in cubes for chicken treats during these hot days.  We sure can use some rain here.  If you've got some to spare, please head it this way.  Wishing you a good week!

Isn't it wonderful to be able to harvest lettuce for daily salads? I'm thankful that our lettuce, chard and kale are still going strong, thanks to some shade in the garden.

Those Japanese beetles are a menace! Glad your hens are taking care of them.

Having the lettuce to harvest is a lovely thing. Glad that's one things that doesn't have any pests!

I made falafel a few days ago too! I had only made it once before from mix, this time I did it from scratch. It was quite easy, although a little time consuming to prep the cilantro and parsley. I did buy store bought tzatziki and pita bread to go with it. Along with tomatoes, lettuce, and red onion, it made a delicious hot weather meal. I am anxiously awaiting tomatoes from our garden.
And yes, that buggy is beautiful!

We have been gone for three days. I hope we still have a garden when we return home. It has taken daily bug duty to keep it healthy (beetles, squash bugs, tomato worms).

I've made it from scratch too, Michele, but liked the store bought better, plus it was quite time consuming. Maybe I need your recipe!

I hope you've had a good getaway and your garden is thriving, Denise!

those beetles are such a problem. I wonder if the extra rain helped them.
I am ready fro some summer tomatoes!
Your garden looks wonderful.

It's been a challenging garden year so far, with late planting due to all the wet, and then it just dried up. We're doing a rain dance over here today :o).

I have one tromboncini plant growing but no blooms yet. It is in the shade but hopefully, it will grow out into the sunshine. I can't grow yellow squash or zucchini due to the squash vine borers so I am hoping the tromboncini will do better.
Jeannie@GetMeToTheCountry

I hope your tromboncino thrives, Jeannie! It does the best for us of the squashes, but we do have a trellis for it, as it rambles quite a bit. Keep us posted!