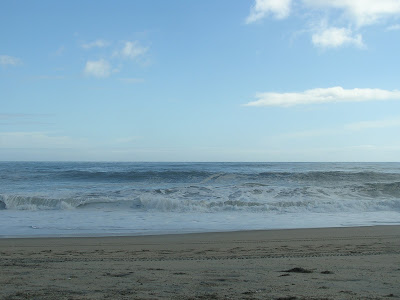 Hello, friends.  Because of Florence, we had to make changes to our trip to the coast.  We usually go to Atlantic Beach, but our lodging was affected, so we switched to the Outer Banks. The trip was shortened by a day, and I booked our room through Swagbucks, so we'll get 8% back.  Our room had no kitchenette, but an adequate breakfast was included and we brought food for lunch and snacks, plus our tea, milk and beverages.  We enjoyed the coffee included in the room, which was better quality than what was served at breakfast.  I grabbed a few real half and half containers at breakfast to use in it, as the room only supplied the powdered stuff, and I'm picky that way.  We visited a small free arboretum and teaching garden.  It started raining just as we were heading back to the car, so that worked out well.  We had two nicer meals out, and two less expensive meals.  Our favorite was a Sicilian place, obviously the favorites of lots of others too.  We had gotten there almost 30 minutes early.  By the time the doors were opened, there were at least 20 others waiting.  Our meals were fantastic, and I enjoyed leftovers another day.  The last night, we picked up a pizza to enjoy in our room.  We checked to see what was playing on HBO and the other movie channels in our room, but there wasn't a thing that interested us, so the TV was never used.  We both brought books to enjoy, and I finished two while there. 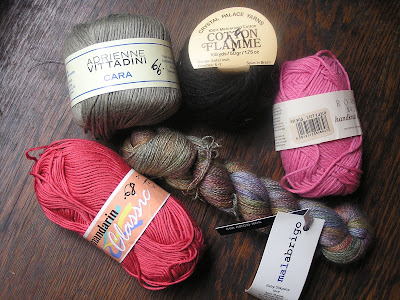 At thrift stores, J found several pairs of work pants, a thermal shirt, a couple of books and a kitchen knife.  I found 3 linen shirts, a thick cashmere sweater, some cotton and linen threads & some silk alpaca yarn to craft with, and a lightweight watering can.  The guys fabricated a lovely steel one for me a few years ago, but it is very heavy, even when empty.  Add water, and it's almost impossible to haul around the older I get, so this one will be used and enjoyed.  J spotted a lampshade to replace the one I bought for our bathroom (but really disliked) for $4.  I was surprised when searching online, how expensive lamp shades are.  I had bought the least expensive one I thought I could live with, after the last one got damaged during the redo, but it just doesn't go with the room at all.  One I liked better was around 6 times as much, about $45, but I just couldn't bring myself to pay that.  The thrift store shade fits perfectly.  We enjoyed free wine tastings at two wineries, though we did end up buying wine at both places.  On two days, I enjoyed a scoop of frozen custard.  Some years ago, I was introduced to frozen custard while in MD, and was hooked.  I'm not much of an ice cream eater, but this is so good.  It's a good thing there are none closer than an hour away from us :o). 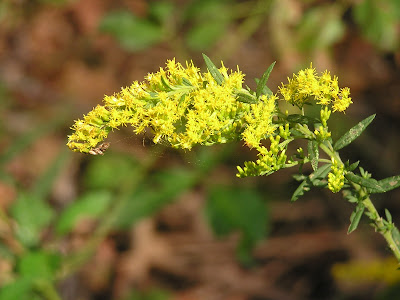 When we got home, we had the leftover pizza we'd brought back, and I turned the boiled eggs we hadn't eaten into egg salad sandwiches.  We had turned up the a/c two degrees while we were gone, and turned it back down when we returned.  I came back to an unpicked garden, as expected, and cut many large okra, which were cut open and the seeds given to the chickens.  The tomatoes are almost done, but I managed to harvest a handful, as well as two pawpaws.  J found one of the cheese wheel pumpkins had started oozing while we were gone, so I threw it in the chicken pen.  The day we left, I noticed one of our older Barred Rock hens looking poorly.  I gave her some extra treats and attention, but found her dead when we got home. 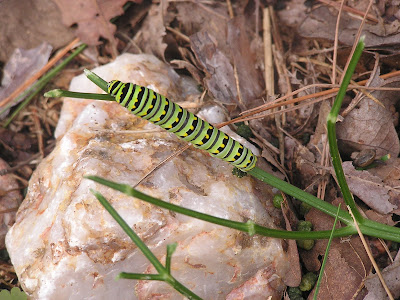 I made a fruit fly trap with cider vinegar in a mason jar, and a paper funnel.  With all the rain from Florence, we now have a multitude of huge mosquitoes, called gallinippers. They're very aggressive, and make it really tough to be outdoors, even with spray.  I'll be glad when it gets cold enough for them to go away.  It's been so miserable, we ended up having to cancel our family hayride that was supposed to be next weekend.  Still, I know we are lucky, seeing the flooding and devastation elsewhere.  Searching for parsley on Friday, I noticed two of the plants were just stems.  Then I saw the culprit, a black swallowtail caterpillar.  Though he was looking pretty fat, I moved him and his stem to another parsley that still had lots of leaves.  While doing this, I noticed something orange, and learned it is an osmeterium, which they put out when disturbed and which apparently smells like rotten cheese.  So glad I didn't notice that :o).  On Saturday, it was munching away on the new plant. Also, I saw two monarch chrysalises on the milkweed in the garden.  Update:  I'm sorry to say that the milkweed was mown down on Sunday.  Not sure why, as it's been there all summer, but that's life on the homestead.  You take the good with the bad. 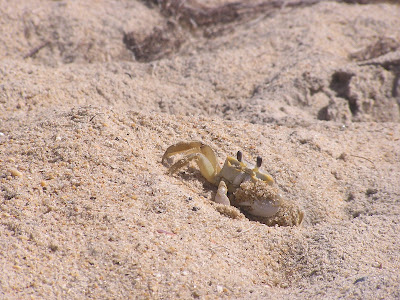 There were some frugal fails due to our vacation.  I had intended to do something with eggplant before leaving, but didn't get to it, so a few needed to be composted.  I cut the good bits out of three more and added those bits to the broth bag.  I found all but two of our tromboncino in storage had started going, so I composted the bad bits, and made soup with the good parts, along with our tomatoes, homemade broth and herbs.  A bag of our "winter" salad greens hadn't been used in time, and those went to the chickens.  Though it's not really wasted if it's composted or fed to the chickens, I'd certainly prefer to not have so much unused of our garden produce.  I had the two pawpaws and the good bits of a pear that had been chewed on, along with a banana for lunch one day.  Plastic bags were washed for reuse, and laundry was done with homemade soap, and hung on the line.  Our 6 yr old washer has not been rinsing correctly; not filling up with enough water to rinse and then not spinning all the water out.  We looked at washer reviews, which was pretty dismal.  Nothing seems to be made well any more.  Even the Speed Queens, which were expensive and spoken highly of, seem to have gone down in quality with this year's models.  J is going to try some things to see if it helps ours, but if it doesn't work, and the computer board needs changing, we think it's best to get another.  The washer I had before this was one I bought used, and it lasted 15 more years.  I sure wish things would turn back in the other direction, when there was pride and good workmanship in making things.  Otherwise, I really don't know where we'll end up. 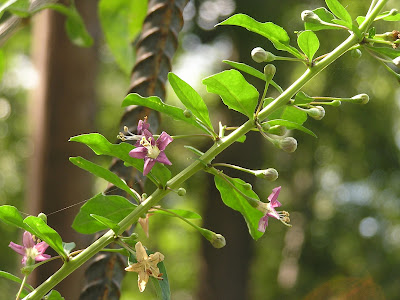 Decluttering has been ongoing.  Most recently, when I was looking at what to take on vacation, I got rid of several items of clothing I wasn't wearing, either because it didn't fit well or I just didn't love it.  I'm also working on fall cleaning as I can, in between other things.  I made my daily Swagbucks goal twice.  Our shower head has been leaking for some time.  Though we changed the head during the redo, the working parts were from the one I originally put in the house 12 or 13 years ago.  After several tries, J wasn't able to fix it.  He called the manufacturer (price pfister), they sent replacement parts for free, and it seems to have fixed it!  I harvested dried zinnia heads for seed.  We received another 2" in rain since arriving home, but it looks like it may dry off for a bit now, thank goodness.  The nights are finally cooling off, so we've been able to turn off the a/c and open up overnight. 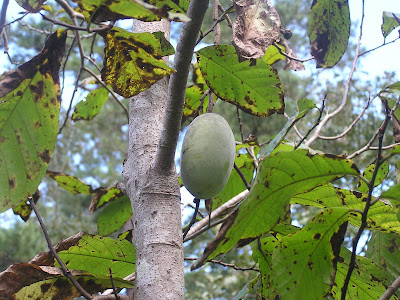 Two books were requested from the library.  Potato salad was made using our potatoes and parsley.  There is one last pawpaw in the orchard.  We enjoyed the good bits from one of our yellow watermelons, and gave the rest to the chickens.  Warm up water was used for flushing and watering plants.  The goji berries have been blooming for weeks, with plenty of pollinators, but I can't tell if there are any actual berries.  I remember last year, all of a sudden it seemed that there were red berries, right before frost.  I'm still figuring them out.  We brought in the best sweet potatoes, and put them in storage.  I boiled some of the smallest ones for the pups, and J fried up some that had bad spots, and dehydrated some others.  Happy October!

It sounds as though you had a lovely vacation!!! I'm so sorry about your sweet chicken. I totally understand what you mean about no one taking pride in things that are manufactured these days. I do, however, know someone who takes a LOT of pride in their craftsmanship - YOU!!!! I want to thank you for the beautiful gift I ordered from your Etsy shop! My best friend absolutely adored it! She said it was beautifully packaged with a sweet note included also! You are so kind!!!!

Thank you for taking the time to let me know, Holley. It just made my day! I'm so glad your friend was happy with her gift. Your comments mean so much.

I have spent some time this morning catching up on your blog--savoring the beautiful photography and reveling in your thoughts!

I'm glad to have you here, April. Thank you for your kind words.