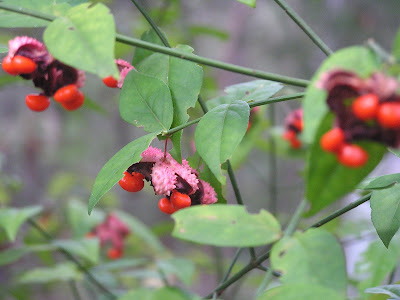 Hello, friends.  Last week still felt like summer here, with days in the 80's and high humidity.  Yogurt was made from powdered milk, as I'd only frozen a pint before we left for vacation, and a small batch of hummingbird food was made.  I continued to see one or two hummers at the feeder up to Oct. 4.  Pasta Norma was made with our eggplant, tomatoes and herbs.  A new recipe for Amish Pear Pie was made with our pears, which was yummy.  Running errands after working in town, I stopped and bought a 6 pack of red Romaine lettuce (with 8 plants in it), after much of our lettuce rotted during Florence. I was also hoping to find some chard seedlings, because try as we might, we just can't seem to grow it this year, but no luck there.  I added some pear pieces to the vegi broth bag, a new experiment.  I'm adding quite a bit of celery pulp, which can be bitter, and I'm hoping this will balance out the flavor.  Two books were picked up at the library. 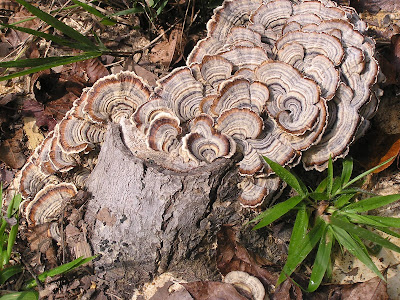 I'm drinking celery juice most mornings.  I'm drinking about 1/2 of what is recommended (~8 oz), and most days it does seem to give me an energy boost.  I've found that Food Lion carries nice organic celery.  I continue to plant the celery ends in the garden, and have 7 now, though one is looking pretty sad after Florence.  I harvested okra and a few fresh and dried lima beans.  A gallon vegi broth bag was filled, and put in our outdoor freezer.  The only way to get it in there was to take a bag of okra out, so I knew I needed to work on eating out of the freezer.  I pulled a bag of Spanish rice from the freezer, as well as taco shells, and doctored a can of refried beans.  I cut up one of our last tomatoes, opened a jar of our salsa, one of recanned black olives, added some cheese, lettuce, and sour cream, and that was dinner.  I had two avocados, but both ended up being bad, so we did without.  Flower seeds were picked up on sale at Dollar General.  I spoke up when I noticed I'd received 50% off instead of the 70% advertised, and actually ended up getting a bit more of a discount from the manager. 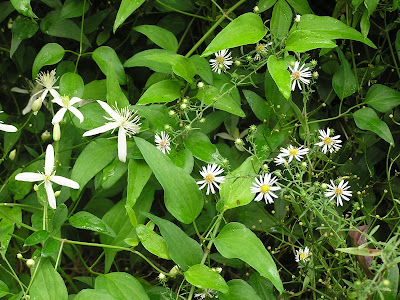 On Thursday, I made a soap delivery and ran errands.  There were no chard seedlings at the Feed & Seed either.  All but one of our cabbage seedlings had died, so I picked up two six packs of cabbage and one of red leaf lettuce while there.  Recently, I've read that molasses along with other ingredients, which seem to vary, helps eradicate fire ants.  If you've tried this, I'd love to hear your results.  It would be fantastic to find a natural way to deal with them.  We'd leave them alone most places, but in our garden and flower beds, we'd love to not be stung while working.  After I got home from my delivery, it was in the upper 80's, so it seemed a perfect day to give the pups a "bath" in the outdoor shower.  A pitcher was used to wet and rinse them.  Being the shower has a spring-loaded door, it kept them captive until I was finished, which made it easy.  After October, I usually don't bathe them again until it warms up in the spring, unless they get into something stinky. 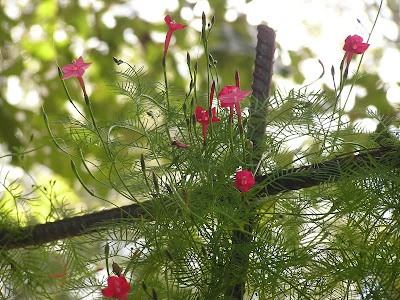 Two more experiments were tried last week.  The first was using my home canned sweet relish to make thousand island dressing.  It was good, but I'll tweak the recipe some.  The one I used had a little garlic in it, and that flavor didn't seem right, plus it could use a little more pizzazz.  The second experiment was cooking up mushrooms that I'd been keeping in a paper bag in the crisper, as was recommended.  The mushrooms weren't slimy, but I thought they were slightly questionable.  I went ahead and cooked them up for mushroom sandwiches, and both of us had a bit of an upset stomach the next morning.  In the future, I'll probably cook and freeze any mushrooms we don't use quickly.  A pan of egg shells were crushed and added to the outdoor compost bin.  The late planted cucumbers are starting to produce.  I picked two, and a small tromboncino squash. 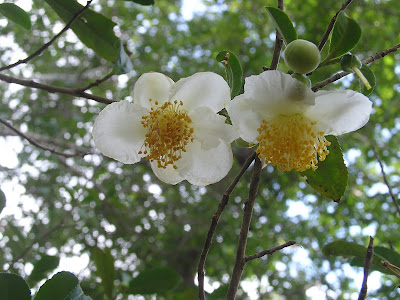 On Friday, I made a soap delivery, then ran errands.  I dropped off household goods at the SPCA thrift shop, and clothes, books and CD's at Goodwill.  At the SPCA shop, I found a large piece of fabric for $1 and two pieces of felt for .10.  I really ought to stop gathering fabric and create before I buy more.  I stopped at the discount grocery store, and they have less food every time I go.  I suppose they make a lot more money on "stuff".  I did find organic beans for .50, Grey Poupon mustard .50, whole wheat and 2# pasta for $1, and Lindsay black olives for .50.    All the pasta was put in the freezer to eliminate any chance of pantry moths.  I made waldorf salad using our apples, and used our potatoes and tomato sauce plus pantry items in Shipwreck casserole.  Bread from the freezer was warmed, making just a bit more room there.  Since Florence, we'd been noticing a musty smell in our bedroom, and then splotches of mildew on the walls.  When I got home, J had pulled all the furniture away from the walls and was washing them with a vinegar/washing soda mix.  While the furniture was still out, I vacuumed and mopped the floor around the perimeter.  It smells much better, and I'm sure is a healthier room to be in.  We washed all the bedding on Sunday. J's pillow "exploded" in the washer, but he sewed a new side on the one that had the hole.  I had the perfect fabric for him to use, so that was a plus. 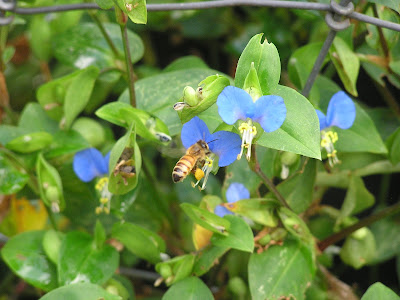 This week, I have so been enjoying this song.  I must admit that when I find a song that fills me with joy, I can listen to it over and over.  I've listened to it while I worked in the kitchen, worked on soap orders, even in the car.  I'm so glad there is beautiful music in the world to listen to.  Watching the video brings joy too, in seeing how beloved they are to one another.  On Saturday, honeybees were really working the wild dayflowers.  J & I planted a dozen cabbage seedlings, red leaf lettuce, and a goji berry I started from a cutting.  While weeding, waiting for J to dig holes, I found a couple of potatoes we had missed.  The mosquitoes were horrendous.  We both got many bites even with spray on, and got back to the house as soon as possible.  It confirmed we made the right decision to cancel the hayride.  I cut pieces of sweet potato to fill the dehydrator for pup treats.  We enjoyed one of our cucumbers with our last tomato, basil, oregano and black olives in a pasta salad.  My husband enjoyed several hot peppers with this that were given to him.  Wishing you good things in the week ahead.

See--you can never have too much fabric:). You had just the right piece for the popped pillow!

I'm sorry your plants got squashed by Florence. Hopefully, you will get some food from the new seedlings you've planted. Chard should be quite easy to plant from seeds--I'm just not sure you have enough time to get it very big before winter. One idea would be to cover the seeds with a milk jug with the bottom cut out of it--or any other little mini greenhouse-type thing, if you do end up having to plant seeds.

You know, I really should try chard from seed again, Becky. Maybe the third time will be the charm this year. I can usually grow it easily, but not this year so far. I plan to make a little cold frame for the lettuce and celery, so perhaps I'll try there. Thanks for the encouragement.