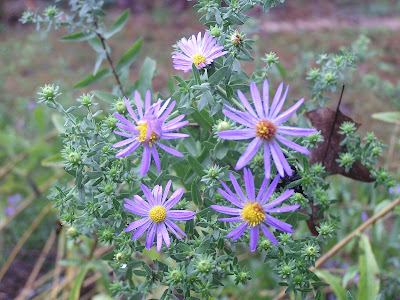 Hello, friends.   Last week, I harvested okra, beets, cucumbers, eggplant, and tromboncino squash from the garden.  Four celery ends were planted, which replaced some that rotted from Florence.  For a dinner, I cooked our beets and potatoes, and incorporated our cucumber, carrot and sweet pepper,into a salad.  The bedroom still smelled slightly musty, so I washed the throw pillows and rag runner, and added in one of the pup's bed covers.  I was a little concerned about washing the rug, but washed it on a light wash, then pulled my car in the sun, and draped it over the car to dry (J's suggestion).  It thankfully did fine with that treatment, and seems to smell just fine in there now.  Now we're supposed to get another 2 to 4" of rain from Hurricane Michael.  Knowing that was coming, I caught up on laundry, and hung it on the line, as well as cut a bouquet.  Last week, I learned that some people think it's not a good thing to make your own laundry soap.  The soap supposedly does not come out of fabric or your washer well, attracting dirt and smells.  I've been making laundry soap for years, and always blamed the smells on our water, but perhaps not.  I bought Biokleen laundry detergent, through Vitacost at 3% cash back, and am seeing if I notice any difference.  Towels and J's work clothes were the worst, as far as being smelly.  We'll see what happens. 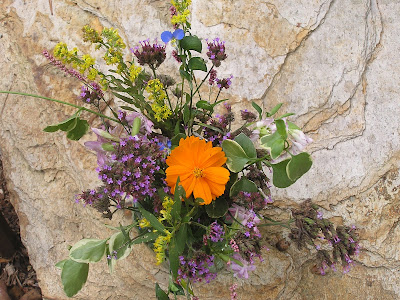 I've had redyeing the pair of leggings on my to do list.  So much of the plant dyeing info is geared towards wool and silk, and I spent a lot of time researching what I could do with what I had on hand for cotton fabric.  I finally decided to try dyeing with oak galls with some added iron water (prepared months ago with iron filings, water and vinegar).  They're soaking as I type.  Hopefully, I'll have something interesting to show you.  I accepted an offer, and sold a book on ebay.  I sold another book a different day, and reused mailers to ship them.  Our okra, a quiche which used our eggs, sweet pepper and parsley was made, and two rolls that were in the freezer to go along.  Thanks to Becky's encouragement, I planted more chard seeds.  Maybe this time, they'll do something.  We'll be getting lots of rain from Hurricane Michael starting tomorrow, so as long as they don't get washed away, that should help.  I dug our peanuts, and got less than I planted.  They were in a somewhat shady spot, and they'd been chewed by something (again), either rabbits or deer I expect.  I may have to add peanuts to the list of things I can't grow here.

I rinsed out the leggings the following day, and am happy with the results so far.  We'll see how they look after going through a machine wash.  I had gathered them with rubber bands in six spots, which made an interesting design, as did the mix of oak galls and iron water.  We did well eating leftovers last week.  Tropical storm Michael came through on Thursday, which brought less than 3" of rain, some major wind for a short while, which brought many trees down in the area and knocked out our power for 18 hours.  We ran the generator as needed, and were thankful to have it.  I worked on sewing the bed cover for a while, than prepared baked ziti for dinner, with squash brownies for dessert.  Neither of us got much sleep that night, with McNibs having two barfy episodes, and the neighbor's dog barking loudly, among other things.  My shop sitting job on Friday and Saturday was canceled, thinking that there would likely be no traffic at the shop.  After almost no sleep Thursday night, I was thankful to have the day at home.  I did work on cleaning up and painting several shop orders, and did some easy sewing, but not much else. 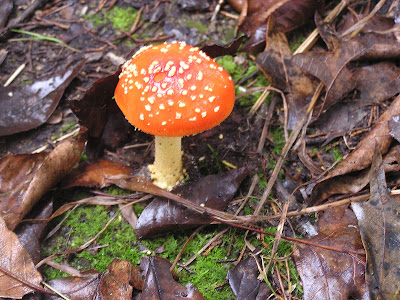 Michael's rain brought more mushrooms.  With the first nights in the upper 40's (hooray, the lows have lately been upper 60's and low 70's), I brought in all the orchids, the aloes and Christmas cactus.  I've been gathering holey greens and wild dock for the chickens.  I really wanted a salad on Sunday, but didn't have a lot to work with.  I grabbed the few lettuce leaves I could, found some chickweed, tiny lambs quarter and violet leaves, arugula growing with the winter greens, added our cucumber, a carrot and there you go.  I made soup with our tromboncino squash, tomatoes, basil , parsley and a few bought items.  I placed an order through ebates, with 12% cash back.  It's supposed to get to 81 tomorrow, so we didn't want to get the wood stove going just yet.  We turned on the heat pump just long enough to get the chill off, after the night in the 40's.  I brought my wool slippers out, and hot glued some spots where the sole was pulling away.  This week, I think it's time to switch to cold weather clothes and sheets.  I'm looking forward to flannel, cashmere sweaters and cozy clothes again.  Have a great week, friends!

Your asters look exactly like mine. The plant was a cutting given to me a few years ago from a friend and it looked like a shriveled up weed. He kept saying, "Next year it will look great." He was right and it was worth the wait.

We haven't dug our peanuts yet this year. In fact, I didn't plant any because of the bumper crop we had the following year. Peanuts really store well in glass jars in my cool dark basement. Anyway, a few came up this year in the tomato row from peanuts left in the ground from the past year. I had no idea they could possibly last a winter in the ground. I can't dig them until we have a deep, heavy rain because I have hard clay soil. Some years they do great, other years there is nothing. Don't give up.

Thanks for the peanut encouragement, Jeannie. They're frequently grown in the eastern part of the state, with sandier soil, but not so much here, where it's all clay. But if you can do it, maybe I can too. Enjoy your asters!