Wildlife on the Homestead & Frugal Accomplishments 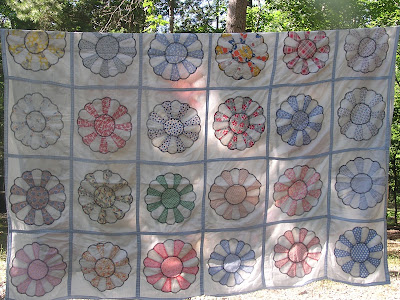 Hello, friends.  This is the handmade bed cover I bought at  a Hospice auction recently.  It's just one thickness, and seems to have a sheet as a base.  I plan to sew another sheet to the back, once I figure out how to best attach it.  We still have Seminole pumpkins in storage from last year's harvest.  I cut up and boiled two pumpkins, made a batch of brownie's with some, and froze the rest.  It doesn't sound like they'd be good, but they're amazingly moist, and wonderfully tasty without any hint of squash.  I stopped by a thrift store, hoping to find some clothing items for my granddaughter.  I found several things for her, as well as a vintage cotton sheet and cotton pajama pants for me, and they were having a 50% off sale on everything! 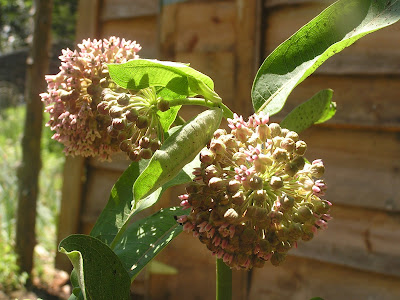 Getting only a few green pea pods a day, I'd been saving them. When I finally shelled them, I had just over a cup of peas, and tried a recipe for creamed peas.  Wanting to try something new with the lambs quarter, I found a recipe for a frittata, which also used our eggs.  Another recipe I want to try called for 1 1/2 lbs of lambs quarter, so I'll save that one for the future.  When J had a business meeting several towns away, he picked up a few groceries, including organic corn on the cob.  It was expensive, but I never see it locally, so I'm very happy he got some.  It rounded out the meal nicely.  This photo is the best I could do to show my new hummingbird feeder in action. 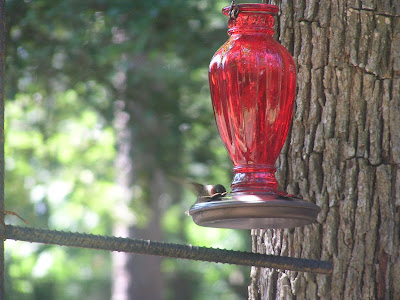 We're still getting plenty of rain, and I'm still planting.  I transplanted several sunflowers that volunteered around the bird feeders, planted butterfly weed seeds in several spots, a few nasturtium seeds, and replanted a geranium I bought recently into a pottery pot. The dutchman's pipe, along with 4 artichoke plants were planted, but sadly the dutchman's pipe may not make it.  I'm not sure if it's the above average rain we've been getting, or another cause.  Purslane was gathered, and used with lambs quarter and recanned black olives in eggs for a breakfast.  I typically turn our compost crock upside down against a rock outdoors, to allow it to dry after washings.  When I picked it up one day this week, there was a toad underneath, enjoying the cool.  I have a barrel full of broken pottery, which I'd been saving to eventually turn into mosaics.  I grabbed some of the larger shards, set two on the ground for toads, and put another two in birdbaths for bees and butterflies to rest on. 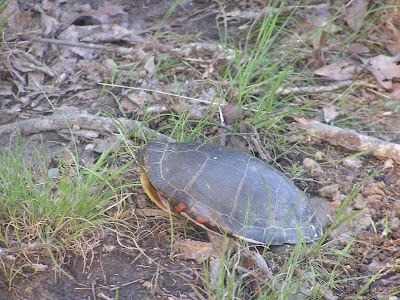 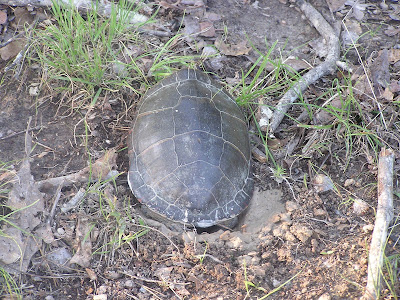 One night, as we were heading for a pond sit, J noticed a turtle laying eggs near the pond.  I think it's very neat that she felt it was a good and safe place to do that.  Homemade lemonade was enjoyed on a hot day, after outdoor chores.  Laundry was done with homemade soap and hung on the line.  A couple of lavender flowers were gathered.  We enjoyed the last of the kale in a salad, letting the remainder go to seed.  Two bags of our okra were pulled from the freezer and cooked in the wok.  I made what I call a hearty salad with our lettuce, peas and boiled egg, plus some grocery items (feta cheese, pecans, avocado, carrots, cucumber). 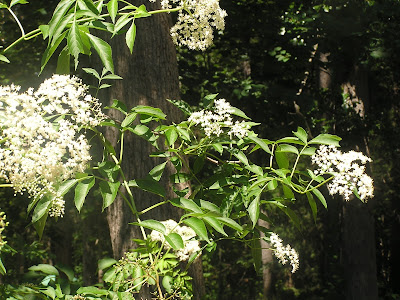 Thinking about what will serve us best as we age, we decided to do a bit of a bathroom renovation.  J got started on it this weekend.  It will take a while to finish, but a good start is a wonderful thing.  The elderberries are in bloom.  On our way to the chicken pen, J noticed a birds nest in a clump of elderberry.  I snapped a a photo while mama was away.  Though it was hard to be certain, it looked like it may have been one of the larger thrushes I've been noticing around the garden sitting on the nest when we returned.  Between the webcam set up near the pond, the turtle laying eggs and this nest, the focus seems to be wildlife around here recently.  It's a blessing to live around the wild things... well, most of the time. 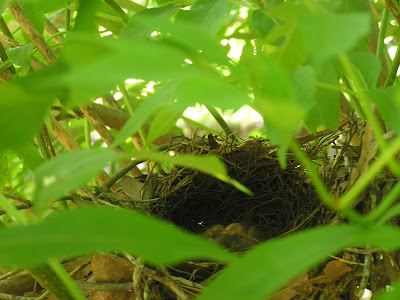 Heading to the chicken pen to give them a treat of oats and clabbered milk, we also were wanting to see if we could determine which of the chicks were pullets and cockerels.  We both agreed that it appears two of the chicks will be roosters, which gives us four more hens.  The ratio could be worse. I made blueberry scones for breakfast Sunday morning.  We picked up beets on Saturday, and grilled most on Sunday, along with our asparagus.  That will likely be the last batch of asparagus for the year; so good while it lasted.  Onward to cucumbers, tomatoes, squash and more.
Posted by Laurie at 6:30 AM

Never a dull moment at the Clean Green Homestead! It's so nice to take in all the natural wonders around us, yes?

Looks like a quilt top to me--that's certainly a traditional quilt pattern on it.

The natural world is a lovely thing, indeed.

It does look like a quilt top, April, but it looks like it was used as is, as there are a few frayed spots, and I can't see where anything had been attached. I'm told the pattern is Dresden Plate. Wanting something very light weight for summer, I'm still deciding how to best make it work for us.