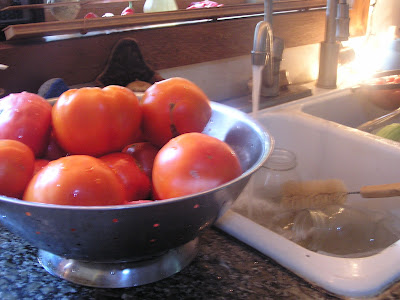 Last week, I harvested dill for seed & seasoning, elderberries which were then crushed & added to a batch of tincture, the last of the Corot Noir grapes, which I froze, zucchini, yellow squash, tomatoes, cucumbers.  I canned a batch of tomatoes.  As the first of the corn was just about ripe, the raccoons helped themselves to those ears.  The next day, we picked any that were getting close, so we'd be sure to get some.  We had 8 small ears for dinner, & I froze the rest in meal size portions.  The raccoons have visited several times since, so it appears that one picking will be all we get.  We ate a squash casserole two nights, and I froze the remainder, enough for two more meals.  I'm joining in with Frugal Accomplishments today. 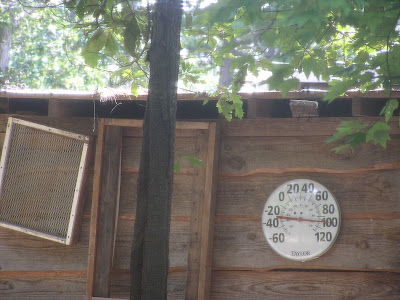 I canned kosher dill pickles, harvested basil, made a double batch of pesto and froze it, and started another jar of elderberry tincture.  I made yogurt and kefir, and shared tomatoes and a cucumber with a friend.  On the day after our thermometer registered 101, I found one of the little chicks dead in the coop.  She was in her usual night time spot, and I wonder if the heat just didn't do her in.  I've had older chickens die during very hot days, but this is the first chick.  Once the nights get warm, we leave the coop door open to their enclosed yard so they have a cross flow of air.  I'm sad about that sweet chick.  I'm not sure what else I can do other than bring cold treats and ice water during the day.  Their yard has a lot of shade, but it's just so dang hot.  Now there is an older hen that is struggling.  She usually sits next to the water, & has been drinking.  I'm giving her probiotics & extra nutrition, in case it's something in addition to the heat... yogurt, kefir, some of the sauerkraut, crushed nettles, shiso & kelp.  Thankfully, the forecast shows the coming days are cooling off a little bit. 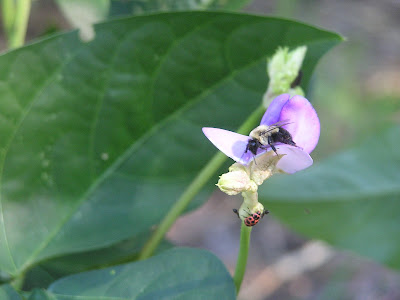 Most of the eggplant I harvested went into a dinner of Pasta Norma.  For this meal, I used our fresh tomatoes and herbs.  It's been six weeks, so I tried the batch of chocolate mint extract that was brewing.  It didn't taste like much, so I strained out the leaves, and added more fresh leaves of chocolate mint.  We'll see what that does. I made a batch of kombucha, and chopped up the extra scoby for the chickens .  They loved that.  What was left of the last batch of kombucha went on the compost.  J & I tied all the tomato cages together with twine, to make them less likely to fall with wind or under heavy weight.  There are also tall rebar stakes in every other cage.  I began tying up tomato branches that escaped the cages, so they won't break when heavy with fruit.  There's not much to do with the ones that come out the top and fall over, but I can tie the lower ones.  The cages we make are 4' tall, but most tomatoes grow taller. 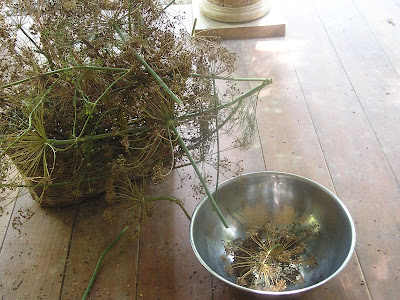 I got the toaster oven out of the pantry, and have used it a few times to warm items, rather than using the oven.  I tried the sauerkraut.  It's getting a nice tangy flavor, so I'd say that experiment was a success.  I'm going to move it to the root cellar, and just keep a jar in the fridge for current use.  I listed items on ebay, and made swagbucks goals most days.  It's been nice to have time to do some "piddling" around the house.  I've taken care of paperwork, saved seeds from flower heads, swept, and did hand washing.  I gathered magazines that will be shared at the library and with the homestead group.  Stay cool these hot summer days!

I tried to to leave a comment it disapeared. You can add a fan and blow it over jugs
of ice. Or just jugs of ice bring the temp down. Spray the area around and on top of the coup with water and the dirt so they can have the ground a little cooler (this really good if you have a run or something attached to the coop) A mister or soaker hose helps in the area close to the coup as it drops the temp around the coup. Bowls of water for them to stand in this bring there core temp down( an old hen taught me this) Shade cloth or what ever you have to add more shade. You will loose more chickens in the heat than in the cold. You can give them cold treats also like cold mellon or cucumbers or cold lettuce. I hope your hen makes it. Sorry about your baby.
Patti

Thanks for the great suggestions, Patti. I wondered if any would get into the wash pan of ice water, maybe once the ice melted, but none did. The idea of misting the area sounds worth a try. I thought about trying a fan, so may try that too. Thankfully, the temps have dropped to the upper 80's for a few days, and the hen is doing better.

I believe after 7 days, blogger asks me to publish the comments rather than automatically showing them. Thanks for your efforts in trying to help my chickens!