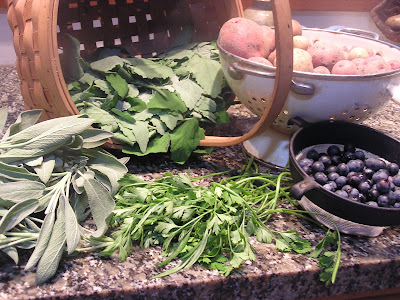 We had a gathering here on the 4th of July for family & friends.  I made asian cucumbers with the cukes I was gifted last weekend.  To save a 30 min. trip to town for organic fruit, we decided to make homemade ice cream using almonds & the remainder of our hazelnuts, which I toasted.  It was delicious!  I gathered flowers for 2 bouquets from the garden, & picked the first 3 cherry tomatoes, & used them as part of a pasta salad.  J found a 10# bag of rice on markdown at the local grocery, & I dry canned it in jars.  We did some research, and J found special lids that go over canning lids that you can vacuum seal with, instead of oven canning them as in the past.  We were hoping to be able to seal foods without subjecting them to heat.  Though we didn't manage to get the jars to seal using our vacuum cleaner as promised in a youtube video (we don't have a vacuum sealer), J got his vacuum pump from the shop, which worked wonderfully.  I'll be happy to not have the added expense of gas for the oven as well as the heat, at least with summertime dry canning.  The sealing went very quickly, which is also a bonus. 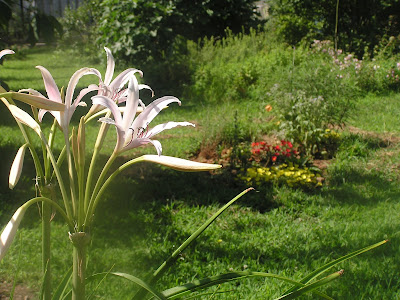 I had found some olives that we loved last year at Big Lots, and was delighted to find them again last week.  I bought all the jars I found at $2 ea.  I mentioned in a post a while back that I was given the OK to pass along any of my friends antiques that didn't sell on ebay after a time. Last week I gifted my second box of antiques, to a lovely local woman who unexpectedly lost her husband last year (in his 50's).  She has a consignment shop with all sorts of vintage goodness.  I hope these items will sell well for her.  Various spots were weeded, including the carrot bed, around blueberries and a flower bed.  I trained cucumbers up the trellis, as well as some beans.  Squash bugs have arrived.  J & I squish them whenever we find them on the cucumbers or squash.  We enjoyed steamed chard from the garden.  One of our cabbage heads had split, so I harvested it & made asian slaw.

There was a day last week with several water challenges.  The first happened when I put a load of laundry in & headed to the garden.  When I got back, I found one of the washer hoses spewing water.  That wasn't great, but our little laundry closet happens to also be where my shelf of soap inventory lives. M & I quickly unwrapped close to 150 bars of soap & I got the dehumidifier running before running to town for new hoses, which J then changed.  Thankfully, it appears most of the soap will be salvageable, which means hours of wrapping will be on my to do list this week.  Next I hung two loads of laundry on the line, with the forecast for 20% chance of rain.  Just minutes after I got the second load hung, the rain began & quickly got heavier.  M came to help me get the laundry in.  About the time I got most of the first load in the basket, I remembered there were chicks out that needed to be let into the roofed area, so took off running to do that, as the rain came down hard for several minutes.  That evening, J realized we had no water pressure.  With changing our system over to rainwater, all the residue from extremely hard well water is gradually coming loose, & it clogged up the system.  After changing the 3 whole house filters, he had to take apart, clean out & put back together our tub temperature regulator 3 times while I ran outside to turn the water off & on.  I'm glad things typically come in 3's rather than 7's!  Then too, I notice what's happening in lives other than my own, and I know this is small stuff in comparison.  This post was a bright spot in a rough news week.

I harvested more lambs quarter, then blanched & froze 2 bags.  Harvested parsley for potato salad and drying, harvested sage which I began a medicinal tincture with, & spearmint which I'm drying for tea.  Speaking of potato salad, I brought in the potatoes we had harvested & weighed them, which ended up being a little over 27 lbs.  Not our best harvest, but that's the life of a gardener.  While picking japanese beetles for the chickens, I found dozens of june bugs on our wine grapes.  We have the green type (june bugs, not grapes :o). They definitely put a hurting on the grapes.  I may have gotten 1/3 of the bugs; the rest flew off, but I'm sure they'll be back. I'll have to be vigilant in the coming days.  During a time I was out picking blueberries, the tall stem of one of the 12 apostle lily clusters fell over, so I cut it and brought it into the house to enjoy. 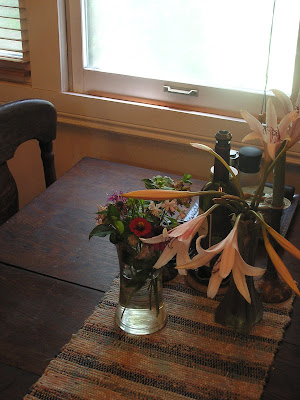 I've been looking for new recipes for swiss chard, & tried making a wrap using a large leaf.  I made hummus & put that in first, then added carrots, grape tomatoes, black olives, cucumbers & feta before rolling it up.  I thought it was pretty good, but J didn't care for it.  He admits to not being much of a wrap kind of guy though.  I made pizza dough with mostly home ground wheat, our garlic & oregano, & peppers gifted to us, in addition to a few store bought items.  J picked our first cucumber for the salad.   For many years, I'd wondered why my hands & arms turn black when working with tomato plants. I finally thought to look it up, & found out it's due to tomato tar.  Who knew?  It seems as though it must vary some, & I wonder if it might be due to a person's chemistry.   Lemon juice helps a little, but not much.  I read of vinegar and tried that, but it didn't do anything on me.  Does it affect you?  Do you have any tricks to remove it?  J worked up the soil where we harvested potatoes, & planted the first of the fall garden.  We planted collards too late last year to have a good crop, & want to be sure that doesn't happen again. Have you begun planning your fall garden yet?  I'm joining in with the inspiring Frugal Accomplishments community today.

Now that we finally have space and sun, we are looking forward to more frugal food ways and growing our own.
What are you planting for your fall garden? We have only grown some greens in the fall/winter, starting to think about what else to plant
and damn those Japanese beetles! ate ALL my roses, grrrr. we have a scuppernong vine full of grapes, hoping the pests will stay away....

We plan to have collards, beets, carrots, cabbage, rutabagas, kale, broccoli, winter salad (mix of several turnips, kale, rape) & lettuce. It's too early for the kale & lettuce, but Joseph planted the collards, broccoli, cabbage & rutabagas so far. We've tried potatoes in the fall, but they did no better than spring planted ones here.

I got a bunch more Junebugs off the grapes last night. J read something we're going to try, I think 1/2 cup of molasses in a 1/2 gal of water in a milk jug. If it works to catch them, I'll post about it. The wine grapes are the only ones ripening here, so they're only on them. Yep, my roses are nubs too :o(.

Tobacco tar was what I remember as a kid.
Maybe if I don't teach I could garden again.
Or get hired out to hold goats for people.
We are not seeing any beetles here. They must have heard it was slim pickings.

To remove the tar, have you tried fruit fresh? It works for taking off the stain from peas.

I can imagine tobacco tar is way worse, Meredith. I believe fruit fresh is citric acid. I'll try it. Thanks, unknown.