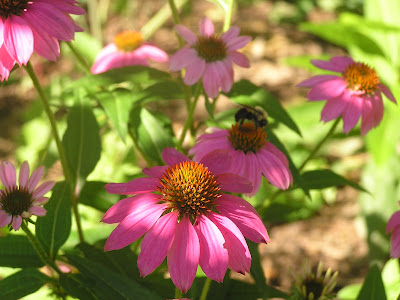 Last week, at the discount grocery, they had all food for 1/2 off their usual price.  I was concerned they were phasing out food, but was told they just wanted to move out all that was there to make room for newer items.  Phew!  There were also sunglasses for $1/pair.  I'm a bit rough on them, as they generally live in my car, so I got 2 pairs.  I also found a Himalayan salt lamp for $9.50 (list price is 34.99).  The salt lamps emit negative ions, which is said to have several health benefits.   The lamp will be a nice nightlight in the new room, and could also be used if I were to do massage work in the room.  At the grocery store, I found organic vegetarian beans and black beans in the markdown area for .80 ea. 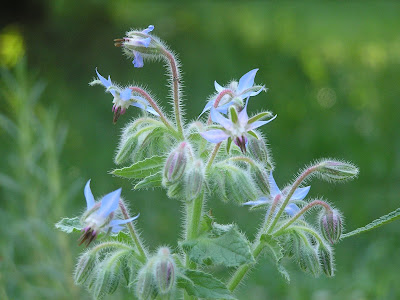 My stepmom came to help me begin finishing up all the loose threads on my quilt.  The next day, we took a road trip to J's old house, and I worked on the quilt while going down the road.  I picked basil, kale, lambs quarter & chard from the garden, & prepared meals with all but the lambs quarter.  Once or twice a day, I've collected japanese beetles, and given them to the chickens. After someone suggested putting a lure in the chicken pen, bringing the beetles directly to them without the need to gather the beetles, I ordered some, and placed it in the chicken pen.  After 2 days, I've not seen any near the lure, & have continued to pick many off the plants... bummer.  Squash bugs are also causing challenges in the garden.  J read about using sticky traps by the squash plants, so he placed those around both summer and winter squash. 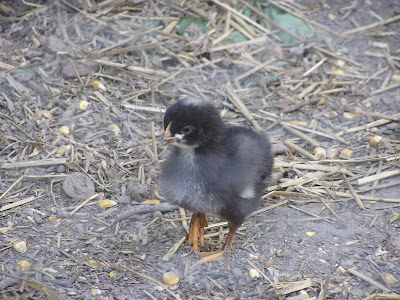 Out of 6 eggs mama hen had been sitting on, we ended up with 3 new chicks.  A 4th chick hatched, but had health issues and didn't make it through the first night.  Mama hen left the nest with the 6th egg still on it, & we never figured out what happened to the 5th egg, which we did find broken, but no chick.  Perhaps it was an unfertilized egg.  We're happy to have the 3 new chicks, and the two that are a bit older, to add some young birds to the flock.  Of course, we're hoping most if not all are hens rather than roos, but time will tell.  Our second rooster is still doing poorly, despite getting special foods & attention daily and being separated from the rest of the flock so he's not picked on. 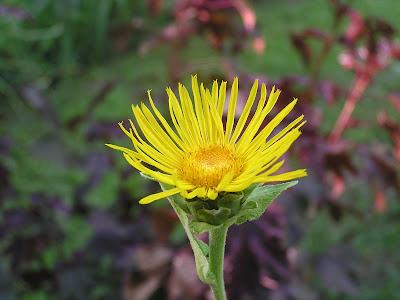 I bought a bag of red onions at Aldi's, & dehydrated them.  I don't use them often, and this works well when a recipe calls for them.  I will say it was a fragrant and eye-burning event for a couple of days! Did the usual composting, washing plastic bags for reuse, doing laundry with homemade soap & hanging it on the line, making kefir, yogurt, & hummingbird food.  I planted crowder peas & more sunflower seeds, as the first ones either didn't come up or got eaten.  I'm joining in with Frugal Accomplishments. 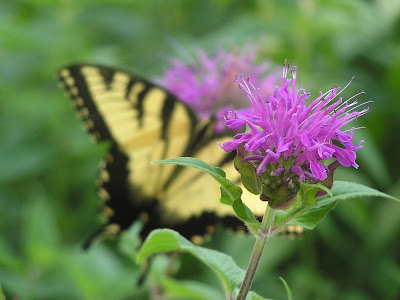 After a night in the mid 50's, I took advantage of the cool morning air and baked sweet potatoes.  I got out to the garden early, and weeded the beet bed.  J joined me & helped me finish up that bed, then we weeded dill, onions, basil & eggplant.  He also watered using the irrigation pump from the pond.  After that, we're in pretty good shape in the garden.  It's probably too much to hope the food plants will out grow most of the weeds that come up from here, but I'll hope anyway.  There are now small tomatoes on several of the non-cherry tomatoes, and a few small peppers.  The bean beetles have been munching on the eggplant, but I think they'll do OK in spite of it.  J harvested the garlic & planted okra in its place.  I fertilized all the house plants and a number of other plants with nettle tea.  I wish you a most happy summer solstice!

As I settle back into my routine, I am taking the time to catch up on blogs. As always, yours is a delight. LOVE the coneflowers that headed this post. Mine are just starting to bloom.

Your blog is always an oasis of quiet and peace. Thank you!

wonderful pictures. Nice composition you have there.
I have found our next dinner date place, we will need to go there when we can both get away.

Thank you for visiting, April, and your kind comments! A new dinner place, Meredith? Fun!

I have discovered that Japanese beetles love roses and I have become a beetle murderer! I get up every morning with a bucket of warm soapy water and pick beetles off of my roses. I tried Pyrethrin with minimal success and we have put down milky spore to try and cut back the future populations. I really hate these little destructive things! The chickens turned my bucket of beetles in water over the other day and ate every one of them. I am so creeped out by this entire process!

Yep, they've been eating rose buds here before they can open, Tracey. I do the same thing... collect them in soapy water. I used to have a pup that liked to eat them, but now only the chickens get them.

Hello. I'm visiting from The Prudent Homemaker. You are so brave! I have a dehydrator but I have never tried dehydrating onions! I think I would have to break out my safety goggles. :) I enjoyed reading through your list. I'm currently working on my first quilt. Thanks for the inspiration!

Thanks for stopping by, Amanda! I checked out your blog, & it looks like you've had a great start to summer. It's nice to meet a fellow quilter & book lover.