Sadly we lost our ailing rooster this week.  The rest of the flock, including the 3 new chicks look healthy, thank goodness.  Last week, I harvested parsley & basil.  On a day when I wasn't feeling well, I watched a documentary and a couple of episodes of Call the Midwife on youtube, while working on my quilt.  I used homemade bread crumbs in a pasta dish.  Hand picked japanese beetles daily  & fed them & greens to the chickens.  Made a sweet potato pie from our potatoes.  It did seem a little odd to be making one this time of year, but we enjoyed it just as much.  I found a tomato volunteer, which J transplanted in the garden.  I collected eggs from the hens and used cloth napkins with meals.  I'm joining in with The Prudent Homemaker's Frugal Accomplishments today.

To keep the house cooler on hot days, I closed the blinds and door on the south side of the house.  After trying the new Harris Teeter a second time (the first time they charged full price for sale items I had bought), I was once again less than impressed.  The cashier forgot to ring up my $10 off $50 coupon, so I had to go to customer service.  That wasn't too bad, but when I got home, I realized the almond milk I had bought had a use by date of Nov. of  '15, and this store wasn't even open in November of  '15!  After letting them know of my displeasure, I was given a $10 credit on my VIC card, which will go towards my next purchase.  When I received a survey from the company I buy supplements from, I let them know that I much preferred the shipping they used prior to the past several months, which got orders here typically in 2 days vs 6 or so.  Because of that, they have upgraded my account to always use Fedex shipping for my orders, instead of being turned over to USPS Smartpost.  I guess sometimes it pays to complain :o). 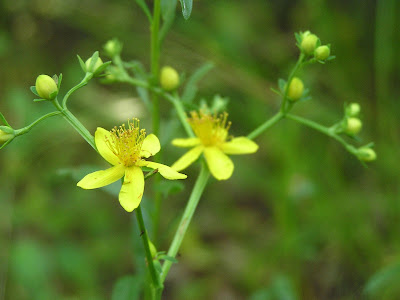 I found this yellow flowering plant down near the creek, which I've not seen before.  If you know what it is, I'd love to know.  I believe it may be some type of hypericum, but I haven't found anything like it yet online.  The leaves are smooth ovals, & do not show spots when held up the the sun, as I had been taught, so I'm not sure.  I've been hanging on to a free Tofutti coupon for a long time.  We were headed to a family gathering, with a Whole Foods a block away, so we used it when buying groceries there.  I've begun gathering the first ripe blueberries, along with wild blackberries, & rare raspberries & mulberries.  I used our garlic when making hummus.  We've had some very hot days (mid 90's), so I gave the chickens some frozen corn "muffins" to cool & amuse them, and froze another batch.  I made an herb tea using red clover, nettles, spearmint & red raspberry leaf harvested here, & planted 3 varieties of beans in the patches where the previous beans didn't come up.  Our garden spigot had a significant leak, which J felt was finally beyond repair,& he and I replaced it.  In between helping with that job, I weeded around a fig bush, cut away a mulberry seedling & some milkweed that were keeping sun from it & pulled up horse nettle & wild blackberry that had come up around it.  I'm hoping that will mean more figs in the future.  We have 5 fig trees, but a total of only 3 figs so far this year.  Three of the fig trees have become fairly shaded by various other plants, which doesn't help.  Oops, make that 7 fig trees.  I forgot about the 2 youngest ones next to the pond.

Laundry was hung on the line, after washing it with homemade laundry soap & soap gel.  I trimmed the dogs nails at home.  Guinness is a sweetie, & lets me trim all of his.  After much cajoling, McNibs let me trim his 4 longest nails, which I consider an accomplishment.  Though he is very food oriented, even treats don't help in this instance if he doesn't want to do it.  I gave both dogs a bath using my Sirius dog soap, which includes a number of essential oils for fleas and ticks.  There was a huge auction nearby over the weekend.  It was so large they had two auctioneers working in different parts of the estate.  J & I looked around, but ended up leaving in an hour without bidding on anything. 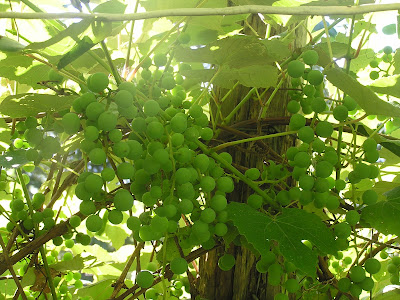 I did a clean out of the crispers in my fridge, which seriously needed some love and attention.  Some broccoli was steamed, a mix of spinach and lambs quarters was steamed & frozen for future meals;  zucchini, peppers and leeks were grilled, an elderly beet and apple were turned into apple beet salad, & I'm embarrassed to say some cranberries which were soft but not moldy were given to the chickens, who enjoyed them immensely.  I fully intended to freeze them at some point, but didn't.  The one thing wasted was a small bag of  arugula I had harvested some time back, & it went into the compost crock.  I sprayed a liquid fertilizer on the wine grapes, & also picked off japanese beetles while I was attending to them.  A late frost damaged a lot of our fruit, so I don't think we'll be making wine this year, but there's always next year to look forward to for our first batch.

Hi Laurie! The yellow flower in your photo looks a lot like St John's wort. I know they are blooming right now in Michigan where I'm at.

Hi Laurie! The yellow flower in your photo looks a lot like St John's wort. I know they are blooming right now in Michigan where I'm at.

Thanks for your visit & comment, Bethany! I thought so too, but had been taught that St. Johns wort leaves have spots that can be seen when held up to sunlight, and these don't. I'm wondering if there are some that don't have the spots? Do you know if yours have spots?

Isn't it funny how we tend to cook certain foods only on holidays or certain seasons? I do that with many things and often wonder why I don't mix it up a bit!
I have been over charged at Harris Teeter a number of times. This week in Seagrove I was over charged for bacon, but undercharged for beer. I didn't bother going back because I almost broke even. :-/

I know of another person overcharged for sale items at HT too, Michele. But they actually called & are sending me several $5 gift cards for the overcharge & the 7 month expired almond milk :o). I need to check out the beer selection in Seagrove!