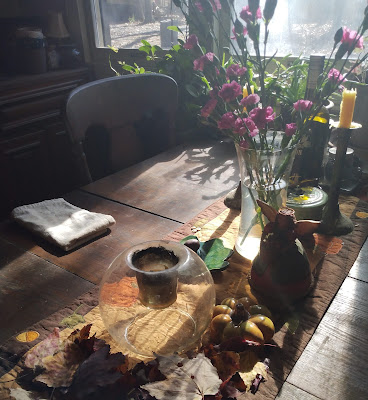 Hello, friends.  On Monday, I canned vegetable broth, adding another 14 pints to the pantry.  When the canner water cooled, I added it to the woodstove humidifier.  I enjoyed warm cups of tea, using homegrown herbs.  Chickweed was gathered, and added to a smoothie.  Kale, collards, and mixed greens were shared.  Laundry was dried on the line.  I've been shopping sales for gifts, and using coupon codes when available for purchases, which have further lowered prices as much as an additional 20%.  While prepping for Thanksgiving, pumpkin seeds were thrown in to roast, along with the cookies I was baking.  Fresh cranberry blueberry sauce, GF pecan sandies cookies, maple roasted brussels sprouts, and our lima beans, which J requested, were brought to share for Thanksgiving. 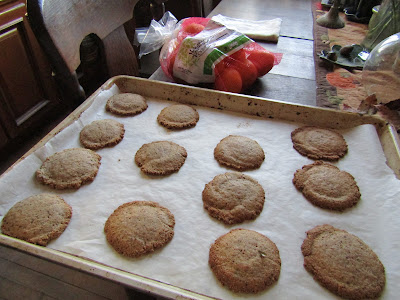 I tried a recipe for lentil sloppy joes, which we both liked, though I'll decrease the heat factor next time.  We were blessed with 1 1/3" of rain Thursday night, so needed, as our tanks were getting very low again.  Once we sent the new video to the solar company, they said the board they sent was not good, and they'll send another.  Our confidence in this company is rapidly diminishing, and J is looking into getting another inverter from a US company.  It was a huge investment, to only last 8 months, and it's not looking terribly good that it will last for the long term.  It stinks, but that's reality.  J picked the company partly because of the great reviews, but he thinks many people may be using the inverter for a small backup system, not to power a home full time as we are.  Which could explain why it lasted no time before failing. 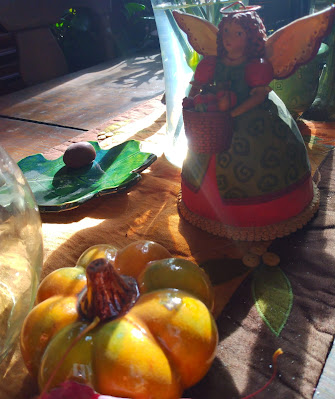 I did a little online Black Friday shopping.  A family member sent ideas for her family that day, and two of the items were 40+% off for Black Friday, so they were purchased.   I also placed a supplement order, for 23% off.  Spaghetti squash and lambs quarter were pulled from the freezer for a side dish.  Oils for soapmaking were melted on the woodstove.  I tried a new recipe for vegan sweet potato pie, using our potatoes, which was delicious.  Winter greens were harvested for a salad, and a jar of crowder peas was opened for dinner.  A bottle of nettle glycerite was strained and bottled.  We had an interesting issue happen last week, in that things that were supposed to suck were not doing so.  The motor on the house vacuum went out, quickly followed by the shop vac motor.  And the lawn vac motor went out too.  J made repairs, and got a new house vacuum (it was used when bought, and a new motor had been put in it once already), and in the process, used some of the good parts to repair others.  Thanks to a very handy guy, all is up and running again.  So many things to be thankful for every day.  Take care of yourself, friends.

Sounds like an enjoyable and low-key Thanksgiving. You are getting a jump on the holiday season with all of your good deals!

Isn't it wonderful having a handy hubby? I know Big K has saved us so much money through the years. What a blessing.

Glad you got some of that glorious rain! So grateful for our allotment this month.

Enjoy your week. Peace and blessings to you.

So many things to be thankful for everyday indeed! I, too, am blessed with a handy husband. Some days it amazes me how he has so much knowledge packed into that brain.

That really is too bad about the solar system. Unfortunately, that makes sense what J is thinking about the reviews.

We were able to find some sales this weekend as well for shopping. We also bought ourselves something - 2 new coffee mugs made by a potter who set up at the craft show we sold at on Saturday. We both love handcrafted pottery so it's always a wonderful find.

A handy hubby is a wonderful thing! Our tanks are almost full. With the rain coming Weds., that may do the trick.

I love using handmade drinking vessels and plates daily. Being you love pottery, you may want to consider a visit to Seagrove some day. There are so many shops and styles to choose from here.

Being a retired potter, I can't agree more with use of things made by loving hands...craftsmanship of any medium is simply passing along the love.

Barbara, I so agree with you. Handcrafted items have a life force, good energy that manmade things could never match.

"So many things to be thankful for every day." You said it, Laurie. I'm thankful I can drop into your blog and rest in its thoughtfulness.

I'm thankful for your visits and comments.