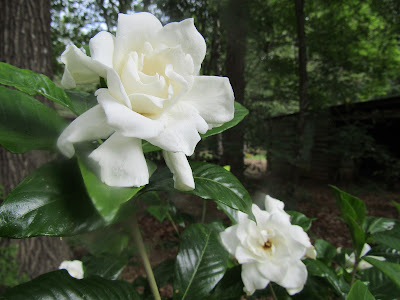 The morning the heat dome was to arrive, I harvested two heads of lettuce, and left two of different varieties to go to seed.  A  few more small lettuce plants probably won't make it, but they're in mostly shade, so it will be wait and see.  Indoor chores were accomplished, such as making a batch of ketchup, and starting a batch of glycerite for pain and inflammation.  The ketchup was divided in three, and two containers were frozen.  The herbs, which were valerian leaf and flowers, echinacea leaf and flowers, and catnip, were gathered and mostly dried before making into a glycerite.  I learned of the recipe on Rain Country.  The recipe also contains feverfew, but all of ours has died out over the years.  It was originally planted here to use in a migraine remedy for my ex, and neither of us thankfully has that issue, so we'll try the recipe without it.  The ketchup recipe calls for 1/3 c apple juice.  It's not something we typically drink, so I am freezing it in cubes for the future. 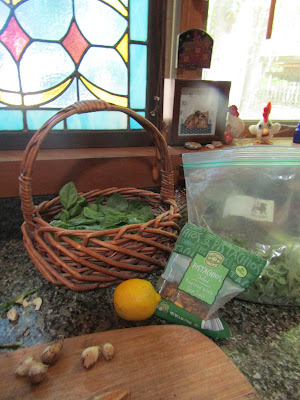 The morning of the hottest day in the forecast, I cut my walk short, then mulched the newly planted area of blueberries, blackberries and raspberries.  A small flower bed at my shop was mulched, and a large flower bed in front of the shed was watered and mulched.   A large aster was pruned, to keep it from becoming too leggy before fall.  When all that was done, I celebrated the accomplishment by cutting a bouquet for the house, and some gardenias I placed in a bowl, which smell heavenly.  After having my morning smoothie, it was still in the low 80's, so I headed back out to clean the coop.  It's much easier in the warm months, and doesn't take too long.  I gathered sprigs of mint to strew on the floor, and put in their nest boxes.  The chickens are still getting a daily mash, with a mix of frozen squash from '18, chopped greens and banana peels, mulberries, and sometimes a protein, such as chopped peanuts or boiled egg.  The Japanese beetles arrived a couple of weeks ago, and I began handpicking them for the chickens last week.  They will definitely be sufficient protein for the time being. 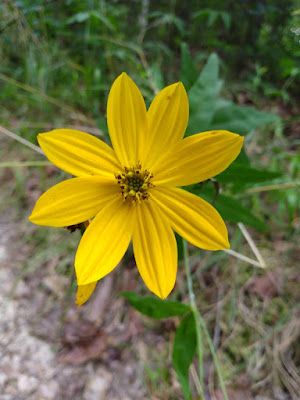 Thankfully, it never got above 92 on the day they forecast 99, and it didn't reach that until late afternoon.  I ended up spending a good amount of the day outside.  Blackberries, mulberries and lamb's quarter were harvested.  I picked up lots of metal where J had burned some pallets, and added it to the salvage yard barrel.  There's more, but I put a good dent in it.  The first outdoor shower of the year was enjoyed.  The guys were working at an away job, so I had the homestead to myself.  After all that outdoor work, I thought that would be perfect.  As always, it was a lovely thing.  Some more carrots were dug.  The tiny carrots and some of the greens were dehydrated for a soup mix.  The rest of the greens were added to the broth bag.  Swagbucks were redeemed for a $25 gift card.  Water from washing lettuce was used on plants, and warm up water was used to flush.  Some of a bag of honeydew in the freezer from last year was blended for a drink on a hot day.  Three books I'd requested were picked up at the library. 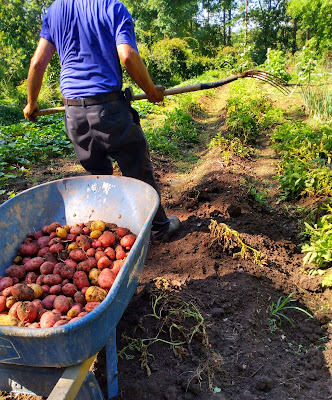 The usual composting, shredding paper, and collecting rainwater happened.  There are little eggplant, peppers and yellow squash on the plants, and we're about to pick our first cucumber.  On one of the steamy mornings, J dug potatoes, and I gathered them.  We did find some wire worms, collected them in a jar as we went, and fed them to the chickens, who ate them with relish.  Take that!  J had gathered a box full of purslane while weeding recently.  I removed all the large stems, cleaned it up, gathered basil, and made several batches of pesto for the freezer.  Several times during the week, berries and lambs quarter were harvested.  I froze a couple bags of lambs quarter, and the mulberries and blackberries.  We were at the critical point for rain with the wild blackberries, as they were drying up.  Thankfully, we got a good rain, so they are doing well.  Only the Salad Bowl lettuce came up, of the last round I started.  I began a new round of Salad Bowl and two others.  J is holding down the homestead, while I take a short visit to a niece in Asheville.  Wishing you a most Happy Summer Solstice!

The first cucumber of the year!! Now that's exciting. We're not even close yet.

Happy your temps stayed a bit cooler than predicted. Surprisingly, we've had cool temps this past weekend (highs of below 60 degrees! un-heard of!!) and because we've had little in the way of high heat or humidity my lettuce, for the most part, is still doing well.

It sounds like you had a very productive weekend! We set-up at a craft show on Saturday and our farmers market on Sunday. The craft show did ok but our market is always very busy so we enjoyed that.

I would LOVE to have an outdoor shower. I bet it's wonderful to use on hot summer days.

Question on your dehydrated greens/soup mix - do you mix up actual soup mixes or do you store the greens and then add them to a soup you are making? When I read that I thought how brilliant to create soup mixes to throw in the soup pot or slow-cooker and cook up in winter!

I've been watching for the Japanese beetles (they love my paw paw trees) and have yet to spot any. Our flock always gets excited at the discovery of their arrival. Glad they are excited at the sight of them....

Another productive week. You get more done in one day than most people do in a week! ;0D

Ah, yes, Japanese beetles! They are a gift to the chooks. I found several tomato horn worms on my client's tomato plants yesterday and brought them home for them. They were almost too big to eat!

Well, I guess summer is officially here. Not just by the calendar, but by the heat we're expecting. Yesterday was absolutely beautiful and no humidity here.

When I got in from out of town today, Staci, I saw my husband had picked the first two cucumbers! Highs in the 50's...Wow! The outdoor shower is really nice. We have it set up with solar twinkly lights, so it's nice nights too. That's great you had a good show. I decided to stop doing them, because the only one I did well at ended. The greens/soup mixes are new for me. The soup/stew idea was shared on A Working Pantry blog, and I wanted to try it. I'm just adding things to the mix without a plan really, but thinking I'll just grab a handful and add to soups. The greens idea came from a Rain Country video on YT. They can be added to smoothies, or any recipe where you want to add nutrition. Both of these seemed to be good things to try, especially in these times. The Japanese beetles only hit our pawpaws on a rare year. They seem to prefer other fruits. I saw them munching on our apples tonight...grrrr.

Daisy, I'm sure that can't be so! "Take out" for your chickens. I love it, and I bet they did too! The weather was gorgeous in Asheville, where I've been visiting my niece.
A very Happy Summer Solstice to you!

Happy belated Solstice to you, Laurie!

Two cucumbers! That's fantastic!! I love the solar twinkly lights for the shower. That's a great idea. The dehydrated veg soup mix is an idea that I'm going to adopt. I currently store all dehydrated veg separately. Thank you for sharing that. That's so funny that the Japanese beetles avoid your Paw Paws but tend to completely cover mine. I would definitely NOT be happy about them eating my apples or other fruit..... Your comment about Daisy's take out for her chickens is hilarious. 🤣

We had blistering heat much of last week, and a day of it today. I rejoice at the summer solstice because now the days start getting shorter and autumn can't be too far behind (she writes wistfully).

Ha! I know insects as a source of protein are encouraged these days, but I think I'll pass :o). I hope you have milder days this week.

What a long row of potatoes! I don't think I have planted enough this year. It seemed like a large area when the garden was empty but I don't think they will be sufficient. The idea of digging another garden makes me tired just thinking about it.
Jeannie@GetMeToTheCountry