Gardening Days of May & Our First Kiwis 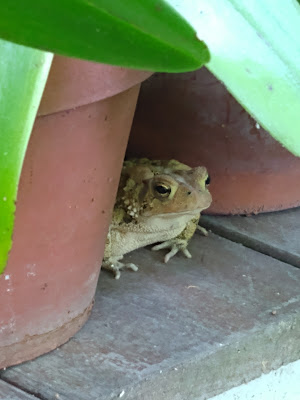 Hello, friends.  Last week, I gathered mint and oregano for the chickens, and put some in the chick area after cleaning it.  While pruning elderberry, which was growing into the path, I repotted a piece with nice roots on it, which I'll give to someone if it does well.  I finally got around to the seasonal chore of rearranging the closet, so I can more easily access the summer clothes.  I got all the house plants onto the porch, where they can transition to brighter light for the warm months. It looks like there's a good possibility of rain several days this week, so I plan to place them in the plant stand early in the week.  There are blooms on potatoes and tomatoes, two of the cucuzzi squash and some green beans are up.  Tomato cages are up, but still need stakes. 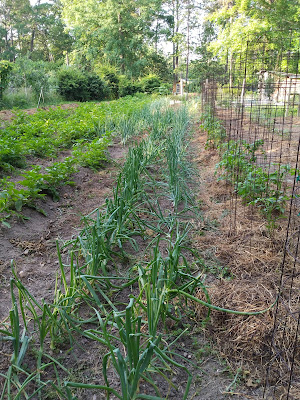 I harvested a mix of greens to dehydrate and use in various ways.   I harvested more to make a glycerite for a sort of "multivitamin", which was a new to me concept I found interesting, and learned about here.  The greens I used were plantain, dock, kale, dandelion, strawberry, grape and blackberry leaves, stinging nettles, and a small amount of chard and lambs quarter.  I looked out the kitchen window one day, to see a brown thrasher near the bird feeders, a pretty bird I rarely see.  Snakes have been active on the homestead; black, green and king snakes, as well as toads and anole lizards and skinks. 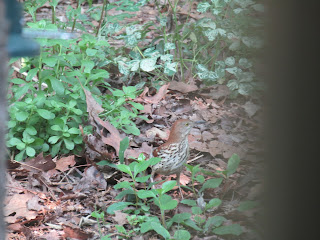 I'm doing garden work in the cooler mornings when possible.  One day, I weeded and mulched one of the raised beds, and added mulch to two more, now that the plants have grown.  Another day, I planted zinnias and black eyed susan vine seeds, and planted another round of lettuce, hoping to extend the season.   I've not been great with succession planting, but this seems a good year to improve.  It's a bit late for planting the flower seeds, but you do what you can.  Many things were watered with nettle tea.  A potter friend, whom I've not worked for before, asked me to shop sit a couple days this coming week.  She keeps bees, and we'll be bartering for honey for at least part of it. 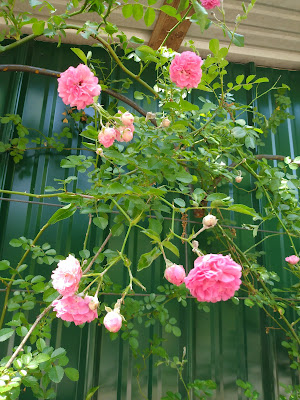 While in town to get sunflower seeds for the birds, I dropped off donations, picked up two library books, dropped off three ink cartridges for credit at Staples, and got groceries, which I was able to use a $6 rewards toward.  Staples gave me a $10 off $20 coupon, so I'll have to ponder if I want to use it.  I went to see my GD in a choral concert one evening, which was a joy.  Afterwards, I stopped by Harris Teeter, got the 5% senior discount, and organic almond milk 2/$4.   I think the kiwis heard my threat of this being their last chance :o), as we have quite a few little kiwis, for the first time in 12+ years.  J prepped, then planted winter squash and crowder peas in the pond garden. 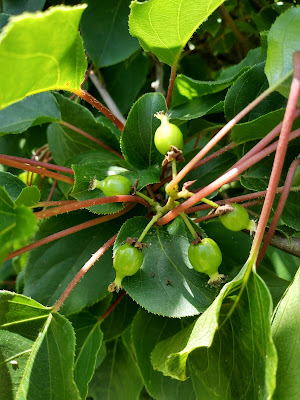 On a hot day, I washed the dogs in the outdoor shower, using my dog soap.  I worked on deep cleaning the studio, and have it finished, except for a few minor things.  There are still a few rather messy spots, mostly fabric and creative projects, but at least it's all clean.  While weeding around a patch of lemon balm, I accidentally pulled up a piece with roots, so I transplanted it in another area to start some.  It's such a wonderful, healing herb.  I gathered lemon balm, and began a quart jar of glycerite.  I recently bought a barrel pump, to access the glycerin bought in January, which J pumped for me, so I'm using the first of this very inexpensive glycerin.  J mentioned cooking with electric, to save on propane, now that we're on solar.  We got the toaster oven down from a high shelf and set it up on one of the plant tables. 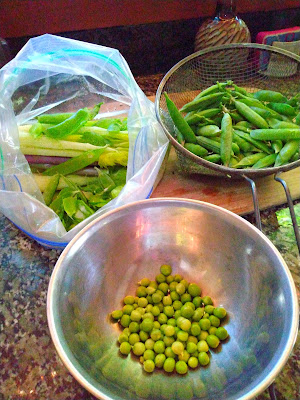 J had started tomatoes in his old truck toolbox, and a number have germinated.  I repotted the larger ones from cells to pots.  Though we don't exactly need more plants, we can always find room for a few more tomatoes.  Peas, asparagus, kale and lettuce were harvested, along with the greens mentioned above.  The peas were shelled, blanched and frozen, and the pods were added to the broth bag.  An order of boxes promised to arrive Tuesday hadn't shown up by Saturday.  I have an order I'm waiting to ship with one, and an item I need to figure shipping costs on with one.  I contacted the company, and they reshipped the order, and sent me a $5 coupon.  It's been another good, busy week.  I hope yours has been fulfilling in whatever ways matter to you.

Your garden is lovely. I love all the space you have.

Your secret is out-now I know that I need to threaten each of my plants in order to get a good yield! Thanks for sharing that tidbit.

Do you donate extra produce to food banks, or do you have enough friends and neighbors that there are no leftovers?

I need to plant some lemon balm. I've heard that it's one of the best herbs to have on hand.

We have yet to receive any of the promised rain, but I keep hoping!
Have a wonderful week!

We do share produce with friends and family, but I also preserve a large amount of it. If you're ever in this neck of the woods, I'd be happy to share some lemon balm with you. Yes, I may have to do a rain dance today. We could really use some.

Your garden looks great! Not a weed anywhere. The onions look much better than mine.

I'm sure there are weeds, though we're trying to stay on top of it!