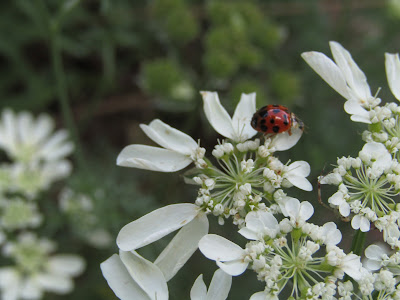 Hello, friends.  Last week, I pulled homemade black bean burgers from the freezer, made fries with our potatoes, and used our lettuce in salads.  I had a ticket to go with friends to a concert in Charlotte on Tuesday, but came down with a cold on Sunday, and still wasn't up to it on Tuesday.  A friend and her new husband were having a gathering the same night, before they head to NY to live.  I was disappointed I didn't get to attend either event, but self-care took priority, and the fact I didn't want to pass on the cold.  Laundry was hung on the line.  The veggie broth begun on the woodstove was canned, adding a dozen pints to the pantry, and the excess frozen as cubes.  I went through Swagbucks for 2% back on a business purchase.  We had lots of dribs and drabs of leftovers on Wednesday, so I combined a couple of things, and we made a meal out of it, to not waste any food. 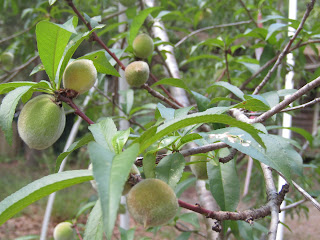 Cilantro was harvested several times.  While organizing a top shelf in part of my pantry, I found a casserole dish I haven't used in years, which was added to the donate box.  A book I requested was picked up at the library.  Our asparagus and lambs quarter was used in breakfast scrambles.  My water bottle was taken on all trips away from home.  I placed an order at Vitacost, and received 15% off the total, in addition to 10% and 15% off some of the items, plus another 8% by going through Swagbucks. Counting on the forecasted rain, I planted many wintersown red veined sorrel in shady spots.  Two pieces were divided from a hosta, and planted in a bed in front of my workshop.  I also transplanted a volunteer dyer's coreopsis, and repotted the Northern Sea Oats into larger, individual pots. 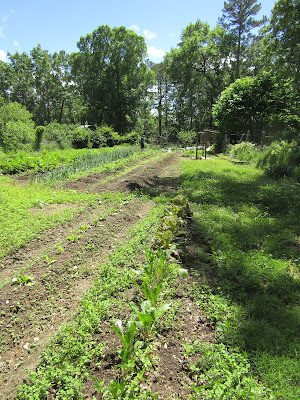 I was asked to show a pic of the garden, so this is the original, main garden, with mizuna in the foreground, lettuce beyond, and another row of lettuce to the left.  There's a bed of cilantro and parsley to my right.  In the distant right is the winter squash trellis, with a row of basil, eggplant, sweet peppers and tomatoes to the left of it.  Moving left, there's are rows of tomatoes, garlic, onions, potatoes, and beyond are two rows of sweet potatoes.  Close to where J is standing, there's a small trellis of cucumbers.  There are concord grapes (& weeds) on the fence to the right, and kiwis in the left corner.  As per usual, one kiwi is full of blossoms and pollinators, but the male is not blooming.  This is probably their last chance.  The raised beds are along the fence in the far right, and a good sized, unproductive strawberry patch is in that corner as well.  We intend to plant winter squash, melons, and possibly crowder peas in our other garden.

After an appointment, I went by Hallmark, and got a free card, plus two birthday cards.  I then headed to Harris Teeter to mostly stock up on foods for another round of cleansing, which I started Friday.  This cleanse was timed so that I could harvest lettuce, asparagus, cilantro and kale for it, saving on food costs.  I received 5% off my total for the senior discount at Harris Teeter.  Asparagus and peas were harvested, and eggs were gathered.  I went through the last of last year's garlic.  Much of it was too far gone, and was composted.  Of the remainder, I kept a little aside, and dehydrated a tray's worth.  It seems like it's lasted a good bit longer than most years, which is wonderful.  A few weeks back, I bought a NWT window planter at a thrift store.  I didn't realize it was missing a bracket, but J fabricated one, and hung it under my workshop window.  He then made an insert for it from some green flashing we had on hand.  Now, what to fill it with?  He'd recently seen a tiller attachment he felt would made his work easier, for $250, and instead fabricated one of them, which he's already used several times in the garden.  I sure love my handy husband. 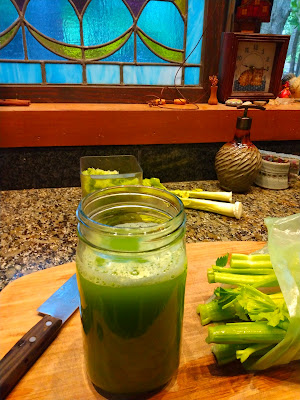 Last fall, I was given a small clump of sweet grass, which I promptly ignored.  I didn't care for the scent, wasn't sure where to plant it, and left it sitting in a little pot until now, when I finally got it in the ground.  The comfrey tea started a couple of weeks ago was ready to use.  In pouring some from a mason jar into my watering can, I pulled out a few stray bits of plant matter, and was reminded to always wear gloves when working with it.  It smells quite potent, and lingered on my hands after numerous washings.   I went around the edge of a flower bed near the road with a mattock, to delineate the edge and create a break, then mulched it.  There's a lot more weeding and work to do in various beds out there, but I'm glad to have that piece done. 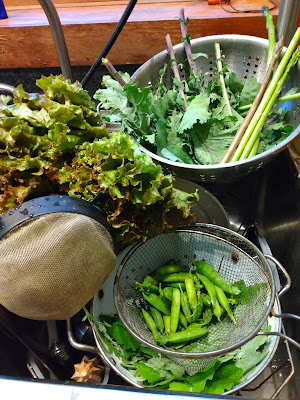 As in many places, the weather has been unusual this spring, with hot and cold fluctuations, and storms.  Each time I think we've had our last fire, I've been surprised.  There's a day forecast to be 94 next week, which may mean the start of a/c season.  While it was raining Saturday morning, I caught up with the SoulSeeds paperwork.  Then I headed out, and harvested peas, asparagus, lambs quarter, kale and lettuce.  The peas were more than we'd gotten so far this year, but still not much, so I blanched and froze them, as well as the lamb's quarter.  While garden wandering with J, he spotted a nice patch of mock strawberries, so I picked some nice fat ones for the chickens.  They love them.    All the new plantings are looking happy, after the rain, except for a bed of parsley and cilantro, which is being munched by critters.  My guess is pill bugs. 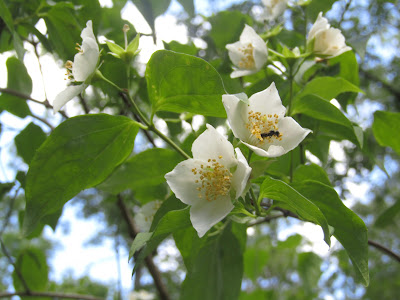 Recently, my sister had been telling me about the bargains she'd been getting from Belk.  Each time she'd redeem a $10 reward, spending just slightly above that, they'd send another.  She suggested I get their cc, to take advantage of these deals, so I did.  I was sent a $10 reward with the card, purchased a pair of Columbia socks and a T shirt on clearance for $3 oop (saving $34.68), picking it up at the store when in town to avoid shipping fees.  I'll pay off the cc each month I use it.  My sister adds a lot of her purchases to her gift closet, and I plan to do the same.  Only about half of the tromboncino and cucuzzi squash came up, so I replanted, and also planted some yellow and zucchini squash seeds.  J prepared spots, and planted butter beans and purple pole beans, and mulched the tomatoes, peppers and basil.  It was a good week in the garden.

Wow, you certainly pack a lot into a week! Sounds like you are getting quite a lot of things harvested already. It never ceases to amaze me how much better the garden looks after a rainfall. Mother Nature knows best!

Have a lovely week!

It sure is easier when you work for yourself, and stay home most of the time. I hope you have a fantastic week!

As always, I love your photos. The one with the stained glass in the background is just gorgeous. And reflective, reminding me to stop and catch my breath.

Stopping and catching one's breath is a skill I work on daily.

I am envious of your large garden! It looks great. Do keep sharing pictures and even give some tours. I would love to see more.

I'm going to take your advice and sign up for coupons from my local Belk. It isn't close but I might be able to shop there combining trips. We have cut way back on traveling since gas is so high.

The Belk store near me is 30 mins away, but in the town where I often get groceries, and can go to the library, bank, etc. while I'm there. I hope you find it worth your while.