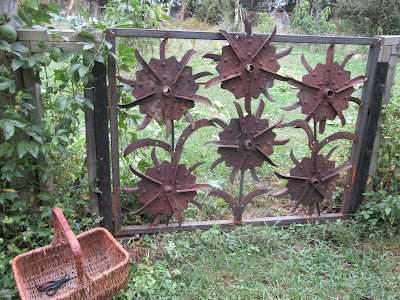 Hello, friends.  Last week, Joseph surprised me with this wonderful garden gate.  Our last one was cobbled together from some decorative metal we were given, and it had rusted enough that it fell apart.  I asked him if we could build an artistic one a few weeks ago, being we work in metal.  We hadn't discussed it since, nor talked about a design, but I love what he came up with, using scrap metal we had on hand.  For a number of months, Harris Teeter has had 3L tins of olive oil on sale for $19.99.  I bought one tin a couple of weeks ago, but realized at that price, I should stock up, so last week I did.  Besides using it for cooking, I use it in soap making.  It should last for years in the tins.  In all the years I've been buying the tins, I've never had one go rancid.  Across the road from HT, I noticed Ace HW had a nice looking nursery.  I've been keeping my eye out for pansies, and was delighted to find some there.  I also got a corkscrew rush, which I really enjoyed having a few years ago, but that one came back as just a plain, straight rush.  I hope this one will keep its curly habit. 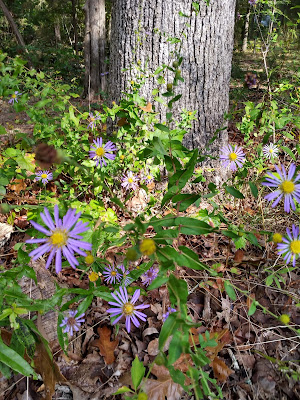 In preparation of moving the house plants in, I bought potting soil  to repot several plants.  I also saw a golden raspberry while there, and picked it up.  When I got it home, I realized it was the wrong time to plant it, but tried anyway, planting it just as it started raining.  After finishing another cleanse, I was looking forward to simple, steamed, homegrown potatoes. It's amazing how good they were after having nothing but salads, juices and smoothies for days.  I harvested rosella, stevia, lemon verbena, and dock seed, which are drying.  The wasps and bees are all over the figs.  I managed to harvest about half of them, and what didn't get used in salads were dried. Next, three trays of sweet peppers were dried.  I harvested the last of the pears, and simmered them with cinnamon and lemon juice, to make pear sauce.  Two pans of dried bread, both GF and non, were ground into bread crumbs. 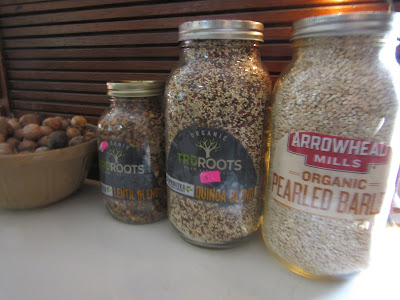 The garden is still producing a few things.  I harvested yellow squash, eggplant, a lovely head of lettuce, sweet peppers, and hickory nuts.  It's molting time in the coop, so eggs are scarce these days, with maybe one, or if we're lucky, two eggs gathered a day.  We're managing, because they're one of my off limit foods at the moment.  The discount store barley, quinoa and lentils were put in jars for the pantry.  A dish was made using our yellow squash, tromboncino, red pepper and onions.  Our garlic and broth was used with sauteed spinach.  Laundry was hung on the line, but hadn't fully dried before a shower came, so it was finished in the dryer.  I gathered fruit from the black haws I found this summer, maybe 1/2 cup.  It turns out they are mostly seed.  Being there were so few, I thought removing the skin and flesh from the seed, drying them and powdering them to add to smoothies was a good idea.  Turns out it's a great deal of work for very little.  In the future, I'll cook them up with another in season fruit, perhaps pears, and put them through a food mill to remove the seeds. 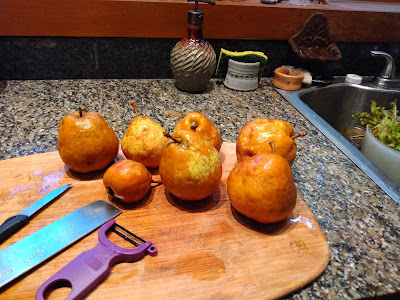 Saturday was a cooler, damp day, so after canning the pear sauce, vegetable soup was for dinner.  Home canned tomatoes, tomato juice, squash, lima beans and cabbage were used, and homegrown onions and garlic, with bought carrots and celery.  I meant to add potatoes, but forgot until it was almost done. Oops.  Popcorn was made to go along.   I've noticed lots of pumpkin recipes on social media recently.  I wanted oatmeal on Sunday, and opened a jar of home canned pumpkin, which I whisked a portion of until smooth, added cinnamon and cut up an apple to top it.  It felt like a proper fall breakfast.  I wear a scrunchie in my hair daily that I made from fabric I had dyed with plants.  The elastic was giving out, so I took it apart and gave it new elastic.  Hopefully, it will last a good while yet.  Two of the three library books I have were attempted, but not enjoyed.  To stop reading two books in the same week is a first, but there's no sense wasting time reading books that aren't enjoyable.  Thankfully, I'm enjoying the third one quite a bit. 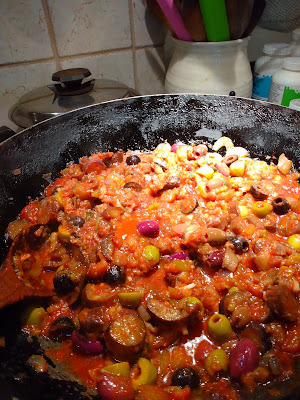 Our main rooster has had a foot issue for a while.  We both did research on bumblefoot, and on Sunday, after soaking his foot in a warm epsom salt bath, J held him, and I sanitized his foot and removed a scab, then put Neosporin on it and wrapped it up with gauze and a vet wrap.  I hope it helps.  With an abundance of eggplant, I quadrupled my Mom's caponata recipe, and canned it for the first time.  I cut down on the olive oil and vinegar, and it still tasted amazing.  I look forward to enjoying it over some crusty bread.  For dinner, I harvested pesto and purslane, and made pesto.  A salad was made using our lettuce, cucumber, red pepper and store bought items.  It won't hurt my feelings if that's the last canning I'll do from the garden this year, as I need to be moving on to repotting house plants and cleaning windows.  We've got several nights in the 40's coming up in a week or so.  I'm looking forward to that first fire in the woodstove.  Wishing you a cozy week, friends.

The gate is glorious! Just love the whimsical style.

I hope you find some solutions to your health issues. It is so frustrating when one lives and eats "cleanly" and still has to deal with these things. I hope we both figure out what is going on with our issues.

Enjoy this beautiful weather! It is such a blessing.

That gate makes me smile. I agree that it's frustrating dealing with eczema. Mine is 95% better. I just want it to be done, and from what I read from testimonials of the protocol I'm following, it takes a bit of time, and most do a number of his cleanses. The cleanses aren't what you think of as typical ones, but just even cleaner eating than usual (ie: no fat or salt, and specific foods). I'm probably done with cleanses until spring, as salads as the only solid food, along with liquids, would be tough for me during cooler weather. I hope you find a path to healing for yours. Yes, you too enjoy these beautiful days.

The gate is perfect. He knows you well. Sounds like a productive week!

Thanks, Denise. I hope all is well in your world.

What a gorgeous gate! It must lift your spirits every time you see it!

Hi Margaret! It's a good one.

I love the gate - so whimsical.

After getting the recipe for canning eggplant from you, I ended up giving away the last few I was saving to be canned. A young visitor toured my garden for the first time and he had never seen one! Imagine that! It had to go home with him along with cooking instructions. He was amazed by all the different vegetables. If it encourages him to eat and grow some vegetables, it was worth it.

I ordered a bag of biochar and just put it on the fire ant trouble spots in the garden. I will let you know how it goes.

Jeannie, I understand. That sounds like a very lovely thing to do. I hope it will inspire him. I'd definitely be interested in hearing if the biochar makes a difference for you.