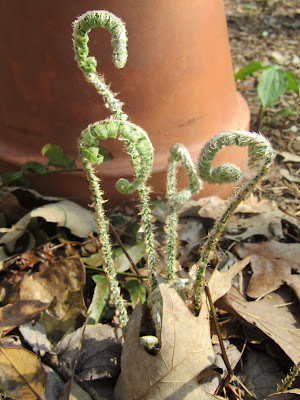 Hello, friends.  Last week, I thinned the carrots, and weeded and harvested wild onions.   The carrot tops and onions went in the broth bag.  I harvested parsley for potato salad, and enjoyed home canned pickled beets in a salad.  Three loads of laundry were hung on the line.  I took all the bags of veggie scraps out of the freezer, and placed them in pots on the woodstove Tuesday night, to defrost and simmer.  They simmered a bit more Weds. morning, then were strained, and the broth was canned, adding 16 pints to the pantry.  J's birthday was Thursday.  He requested German chocolate brownies, which were made from pantry ingredients.  I walked with the dogs every day.  We continue to heat with wood, but it doesn't look like we'll need it too much longer. 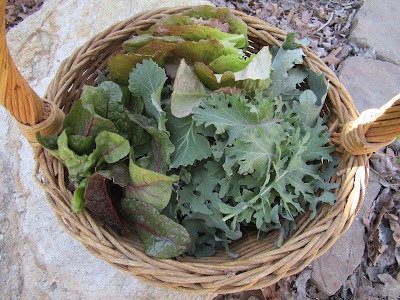 Soup was made, using up several leftovers, along with homegrown tomatoes, onions, carrots and garlic.  With the forecast for two nights in the 20's, I harvested kale, lettuce and swiss chard.  I covered a few plants, but hubby covered several large figs, the gardenias, peas, onions and olives.  They seem to have done well, though I believe we've lost all of the tiny figs.  There's a good chance we lost all our peaches and nectarines too, which is pretty sad.  The first of the asparagus are coming up, which is good, because other than once a few weeks ago, I haven't seen any good prices in the stores.  I purchased some garden amendments using a 15% off code.  J sewed a button on one of his shirts.  Youtube and amazon videos were enjoyed.  We now have three varieties of tomatoes coming up in our cold frame box, and some eggplant.  I've been drinking celery juice most mornings, and some of the celery gifted by a friend last year was harvested. 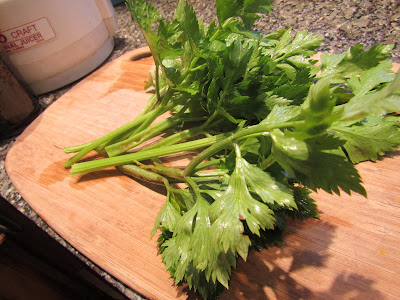 After taking M to an out of town appointment, I stopped at Trader Joe's and a natural food co-op.  I brought my Kindle to read in the car while waiting for him to finish his appointment.  There weren't any great sales on the things on my list, but I did get some Alphonso mangoes for .79 ea.  Parsley and sage were harvested to make my grandmother's dressing, veggie version.  I'm using up the last of last year's onions.  Not too bad to get to April with them, and there are lots outside I can harvest when I need to.  I've been using using our frozen blueberries and peaches together in oatmeal, which is yummy.  I've been enjoying a free Kindle book.  I had started another one, but wasn't enjoying it, so will delete that one. 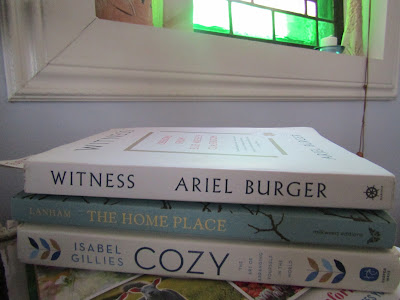 There are a few authors I learned of while listening to the On Being podcast, and I've been enjoying a couple of their books.  The Cozy book is one I read of a while back as being a good one to read during the pandemic.  I continue weeding and cleaning up beds.  Dandelion greens were harvested for the pups most days.  I learned that they supply them with good pre-biotics, so try to incorporate them with most dinners.  Wild wood sorrel was harvested one evening, to add to salad.  It has a lovely sour taste.   With J finishing up, and me painting 8 orders on Easter, it wasn't much of a holiday for us.  I did pick up some organic cinnamon rolls on sale at the co-op, and made them for breakfast.  Pesto was pulled from the freezer for an easy dinner.  If you celebrate, I hope your Easter was a lovely one.

Thank you for the book suggestions. I'm always looking for new authors to explore.

Sorry to hear about your fruit trees. I think winter is finally over. Hope I'm not jinxing us.

It does look like the freezing temperatures are behind us. Fingers crossed. I hear you, I'm always on the lookout for books too.