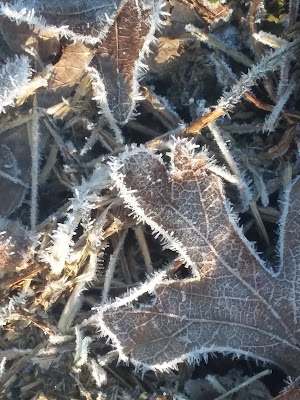 Hello, friends.  Happy December.  Last week, I harvested lettuce and parsley.  I made spaghetti sauce with some of the parsley, our onions, garlic, canned tomatoes, and a cube of the basil I had froze.  The parsley that didn't get used in the sauce was frozen.  I like Margaret's method of freezing it in logs.  For the new workshop, two french doors and three windows were found on fb marketplace, in various places, for $170 total.  We already had some windows.  Only two of the windows will match, but that's OK with me.  I also have a solatube that we'd planned to use in the studio build.  That never happened, so I've asked for it to be used in the workshop.  M suggested a diagonal placement of the doorway, which I liked, as it will mostly be facing trees and flowers, instead of directly looking at the shop, or the lawn mower and such under the shed.  It will also allow me the best view of the house.  I'm willing to give up a few feet of floor space for a better view. 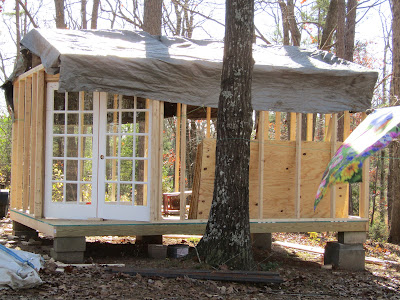 For dinner one night, J asked for vegetable soup. I gathered a can of our tomatoes, onions, garlic, frozen corn, frozen black eyed peas, homemade broth, and store bought carrots and celery.  I also used a pint of cabbage from the canning experiment in the soup, after draining the liquid, and we both agreed it was fine.  Hopefully, we will also like the cabbage sauteed, as I mostly canned quarts, which I think is a bit too much to add to soup.  Soup leftovers were enjoyed for my lunch.  I'm blessed that orders continue to come in to my soap shop, so I've packed and shipped them several days this week.  A fresh batch of Back To The Garden soap was made, which incorporates homegrown mint and local clay in its recipe.  It's been a best seller this holiday season, and sold out over the weekend.  A pan of eggshells was crushed, and added to the compost bin. 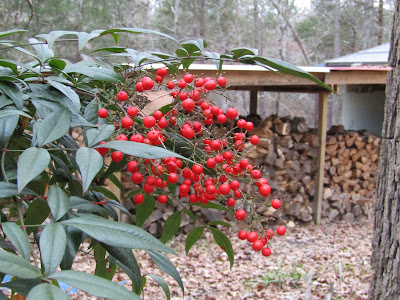 The hollies, winterberries and nandina are looking festive these days.  When we replaced our refrigerator this summer, we were in the middle of harvest season, and kept the old one on the porch, to use for the excess.  I have to admit, it was nice to have the space, though definitely trashy looking.  I finally got the last of the food emptied out of that freezer and fridge, and unplugged it.  One of the things found in the freezer was a partially used bag of garbanzo flour.  It smells fine, but has been in there a while, so I thought to look for ideas for using it for animals, and found a recipe for dog treats I plan to try.  There are only three ingredients... the flour, applesauce or pumpkin, and peanut butter.  Seems a good way to use it up.  I woke very early on Saturday, and was moving slow, so decided it was a good day to make some cocoa, and finish writing holiday cards.  A load of laundry was hung on the line.  A broccoli dish was made, using a mix of ours and store bought broccoli, and our garlic, eggs and onions. 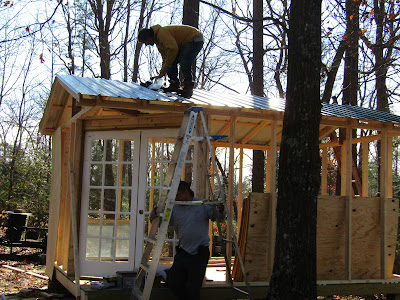 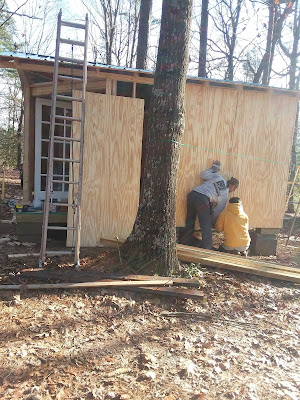 J and his son put the roof on and attached the siding for the workshop on Sunday.  Next will be framing and putting the windows in.  Between powder coating orders, I made lunch for us, the Prudent Homemaker's taco soup, and pulled a loaf of fig bread from the freezer to have with it.  I harvested a small but ready broccoli.  Hopefully, the others will grow much larger, and this one will have some good side shoots.  Collards were harvested to saute for dinner.  Winter squash was pulled from the freezer for butternut squash crumble, and lima beans were also pulled from the freezer.  I needed 1/2c of broth for the crumble, and pulled some mushroom broth I had frozen.  Bringing all the outdoor freezer in has made it a bit tight, so I'm trying to use frozen things as I can.  It makes it so much easier to use what's there, when you can see what you have in the freezer.  I'm slowly putting away the fall decor.  We may look for a tree next weekend.  I keep twinkly lights up all year, and gathered cedar, holly, pine, and catbrier berries for a small bouquet. 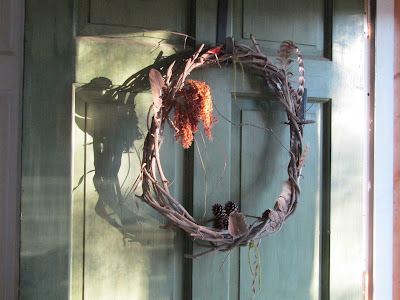 I needed to replace a pillar candle, and noticed I paid .25 at the thrift store for the "new" one in 2017.  I've only bought beeswax candles the past couple of years, and that's what I use at our kitchen table, but I'll use up my thrifted stash of other candles until they're gone.  If you could use some frugal encouragement, join the community of like minded folks at The Prudent Homemaker.  Well friends, it's been a whirlwind of a week.  I hope the coming week will be full of good things for us all.  Be well, friends.

I made a pizza crust this weekend with some garbanzo flour. It turned out great and I will make it again. So many possibilities!

Sounds like you are eating well thanks to the garden. What a blessing.

The shop is moving along quickly! Such a simple thing that will help your business run smoother.

I actually forget why I bought the flour, but think I was experimenting with some recipes, as I have a friend that's gluten free. It's good to know it makes a good pizza crust. Who knows, I may try that too if I have enough. Thanks!

I love the picture of the berries with the wood behind them. It looks so festive and fall-like.

You must be excited to see the workshop going up so quickly. It looks great. I'm glad you are getting orders for soap. I know my husband does better with goat milk soap, but I've never heard of clay soap. Shows how much I (don't) know about soap:)

I live in a longstanding pottery community. One of the local brewers named one of their beers Potter's Clay, which is the one I make soap with, so it seemed appropriate to add a little local clay to the soap. It's a natural exfoliant, and helps remove impurities from the skin (think clay mask). I also add french green clay to my shaving soap, as it provides a nice "slip". I learn new things on a regular basis, and isn't it wonderful?! Hope to be learning as long as I live.