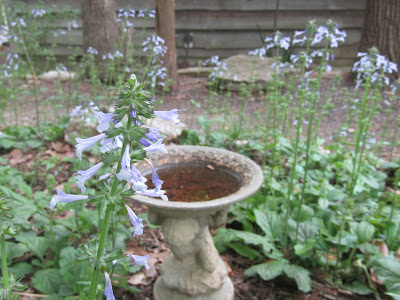 Hello friends.  I hope you've been healthy and happy.  Last week, I made hummus, sweet potato cake, a broccoli quinoa dish, and roasted veggies.  I got side tracked looking for a recipe, and scorched the quinoa.  Once it cooled, I took it to the chickens, who greatly enjoyed it.  Food never gets wasted around here.  It either goes to the pups, the compost, or the chickens.  I harvested asparagus, rosemary, lemon balm, and collected eggs.  After making zucchini tots, there was still 1/2 the grated zucchini remaining, so I made two loaves of apple carrot zucchini bread, and froze one.  I'm still working on using up the last of the kale, and made two kale salads.  It's not the most tender, but fiber is a good thing, right?  I'm picking out the toughest leaves, and chopping them up for the pups dinners.  Two items were mended with the glue gun.  Laundry was hung on the line.  I finished watching the 1940's House, and was sad to see it end. 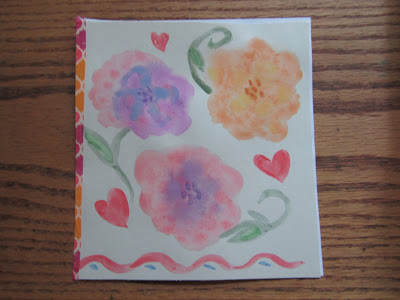 I'd been wanting to make a card to send to my GD.  For the first time since school days, I played with water colors, and though it's not terribly artistic, at least it's cheerful.  I used washi tape to attach the pieces.  More sweet potatoes were dehydrated for pup treats.  I planted money plants, calendula and borage I had started from seed.  I made granola last week, and a new batch of almond butter.  The last batch of almond butter went bad before I used much of it.  I only want granola a day or two a week, and was trying to make my own almond milk, because the store bought always went bad before I used it.  I found it interesting how store bought almond butter can sit on the shelf for months, but  homemade almond butter that was refrigerated went bad in a few weeks.  Can't quite figure that one out.  This time, I made 1/2 batch of almond butter, which used 1/2 c almonds.  I'm hoping not to have any waste with this batch.  The guys ate hummus and sandwiches here for lunches this week, so on Friday, J got pizza from the restaurant they're trying to support, which we enjoyed for dinner and lunches.  I haven't minded cooking during this stay at home time, but I'll admit it was nice to have a break. 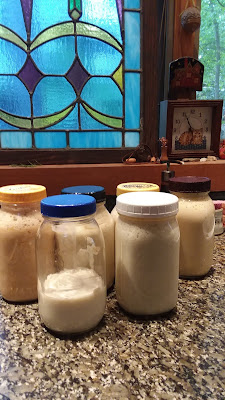 As a soapmaker, I gather lot of soap scraps.  I scrape out the last of what's in the soap pot and let it dry, and get all the bits from when I unmold soap and cut soap.  Last week, I whirred the scraps in the blender with water, and ended up with five and a half quarts of liquid soap.  This is what I use at the bathroom sink.  J prefers bar soap at the sink, but I use the liquid, so it's not wasted.  I used to add some to loads of laundry too, until I read that soap is not ideal for washing machines.  This will do me for quite some time, or perhaps I'll be sharing some.  I had a bit of a disappointment with the ghee I made recently.  In the tutorial I linked to, she mentions having a jar that's been on the shelf for 8 years, which she believes is fine.  When I got to the last of the jar I made, about the last half inch, it began growing mold.  It was great until the very bottom, which is nice, but the mold surprised me.  I may try putting it in two pint jars next time, to see if the decreased amount of opening and dipping into the jar makes a difference.  In the meantime, I'm using some I bought at Aldi's, as I've been using lots of our butter with all the cooking and baking lately.  A batch of yogurt was made.  While there was a 20% off sale, I bought two bones for the pups.  They are for aggressive chewers, which can be hard to find, and which McNibs needs if they're to last any time. 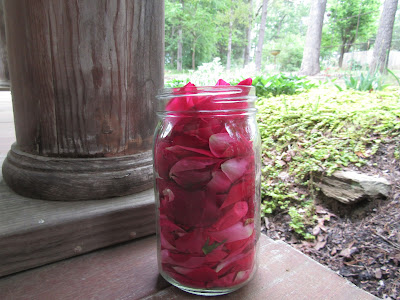 I'm learning an appreciation for spoken word, through the work of IN-Q.  If you'd like to check him out, here's one-  The Only Reason We're Alive.  J was hard at work this weekend, pulling up new garden beds, and planting more peanuts, lots of winter squash and the largest of our tomato seedlings.  I harvested the first few peas.  Orders were painted on Saturday, and packed for shipping on Sunday.  I took pics of and listed several things on ebay.  Several days, I took a few minutes to practice guitar with free online lessons.  The last toothpaste I bought was a lovely combination of rose, cacao and mint.  The roses are blooming profusely right now, so in thinking how I might use them, I decided to infuse a quart of petals into coconut oil for future toothpaste.  I'm thinking I may do the same with chocolate mint, and if I'm lucky, be able to make toothpaste with a similar flavor.  I facetimed with a favorite coworker I had not spoken to in over 20 years, which was lovely.  Dog nose art was cleaned off the storm doors.  While I had the tools out, I cleaned two repurposed storm doors that are part of the chicken coop.  One of them has bothered me every time I drove in and out our drive for some time, so it's nice to have that task done.  Cat brier tips were gathered to use with the little bit of lettuce we had for salads.  Our governor extended our shelter at home until May 8th, which is probably wise.  I'm enjoying having all this time at home.  How about you?

Another fruitful week at your place. All of your recipes sound scrumptious.

How do you keep the squirrels from digging up your peanuts once planted? I grew them in Florida, where we had no squirrels in our backyard, but here, they are everywhere!

Glad to be sheltering in place for another two weeks or so. It doesn't really change our lives much. It's good to be a homesteader!

Have a lovely week.

I have been away from blogging for awhile, just got caught up in a busy life I guess, but I am so happy to return to yours, especially in this time when frugality is very important. Thanks for all the info! We planted zucchini yesterday and I was so happy to see your comment about tots, can't wait to try making some!

It is good to be a homesteader! Well the squirrels and peanuts remain to be seen. The deer chewed them off the last time we tried to grow them. The squirrels are everywhere here too, especially around the bird feeders and orchard, though it's rare to see one in the garden. Let's hope it stays that way. J has already mentioned the possibility of thinning them this year, so that they don't eat our entire fruit crop as is usual. I'm thinking they'd better be on their best behavior.

I hope you enjoy the tots, Tracy. It's good to "see" you again!

I wonder if chemicals are put into the storebought almond butter to keep it fresh? Maybe it has been pasteurized or something? I have never been able to buy it because it always has sugar added. Store-bought food just can't be trusted but we often don't have any other choices.
Jeannie@GetMeToTheCountry

Love the theme: Using What's On Hand. Aren't we all?

Jeannie, I don't have any store bought almond butter left to check, but the cashew butter only has cashews and safflower oil in it. I'm pretty good about checking the label for sugar, and buying organic, but who knows? Something that occurred to me is I should probably be sterilizing the container first, not just washing. I'll try that next and see.

Indeed we are, April. It requires some creativity at times.