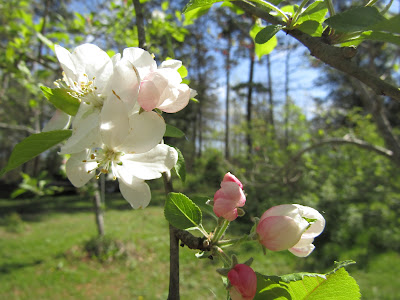 Hello, friends.  How are you doing during this stay at home time?  Are you enjoying the time to catch up on your to do list, to relax and spend time, virtually or real, with loved ones?  Have you read some books, planted something, or gotten creative?  I'm enjoying the time here.  I do still find myself having to go out, which I'd prefer not to do.  This week, I placed an order for an item we needed for one of our home goods customers, expecting it could be shipped.  Well, it was only available to pick up in store.  J had to go to town, to pick up a part for one of his customers, so the plan was he would get it, until I read that the person who purchased it had to show up with their ID, which meant I needed to go.  It turns out they didn't ask for ID, but I wore a mask and didn't touch anything besides my order.  I also took my overflowing recyclables to the dump, and made a bank deposit, but neither of those was risky.  Hopefully, I can stay put this week. 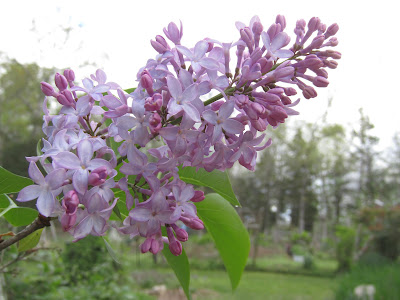 My last visit to Trader Joe's, a number of weeks ago, I purchased a spray of pussy willows.  They, along with lilacs and mimosas were at my childhood home, and all these plants are special to me.  I intended to try to root several of the pussy willows.  By the time I did, their life force was ebbing.  One still had a green stem, so I put it in a pot with rooting hormone, and am hoping for the best.  As a member of the willow family, I thought they might root on their own in water, but that wasn't the case.  Perhaps because they had catkins on them?  A few spears of asparagus were harvested, and laundry was hung on the line.  Popcorn was made in the wok for snacks.  J planted cucumber and tromboncino seeds, and I planted carrot and beet seeds, which could have already been planted, but we didn't have an area prepared before now.  One of the varieties of carrots was a free packet of Cosmic Purple carrots. That should be fun!  While I was awake one night, I mended a nightgown and a free Vera Bradley tote.  The tote was part of the December building clean out.  I added fabric to the tattered straps, and intend to do a bit of mending with embroidery to two spots on the bag. 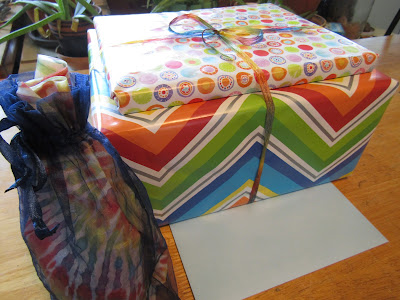 For J's birthday, he requested pizza, so I made a double batch of dough, parbaked and froze one for future use.  On the pizza, I used our red and green pepper and garlic, some of the recanned olives, and mushrooms.  I gathered oregano for the sauce.  He'd been telling me about a nut cake his grandmother made, which he loved as a kid.  I asked his aunt for a recipe, which was basically adding a mixture of nuts to a yellow cake mix.  I found a recipe for yellow cake, and chopped walnuts, pecans, peanuts, almonds and a few pistachios to add to it.  J declared it a success, though it did not come out of the bundt pan in one piece.  Oh well, at least there was no one to see it but us.  He uses a nose rub from The Honest Co., which was almost out, so I researched and made some for one of his gifts, along with a homestead-related book, and the one gift he had asked for.  Strange days to have a birthday, but I decorated with balloons and birthday swags, and picked colorful papers to wrap his gifts. J planted red noodle beans, and created a bed for the tomatoes, one for sunflowers and other plants, and another we're going to try peanuts in. 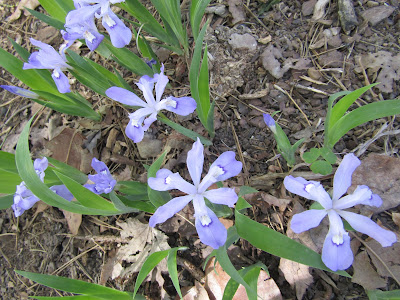 I planted two celery ends in the garden, and fertilized the peas, potatoes, rhubarb, garlic and some strawberries with old chicken manure.  Then I cleaned out the chicken coop, the first time since the fall that I removed everything, as I use the deep litter method through the cold months. Three wheelbarrows were hauled out, and added to the manure pile.  Fresh mint was pulled from areas it was encroaching around the garden edge, and added to the nest boxes and floor.  Lemon balm was gathered, and dried for tea.  I am enjoying using my homemade toothpaste, and am really liking the flavor.  A dish with our sweet potatoes was made, using sorghum and sesame seeds.  I was in the mood for baked pancakes, aka dutch babies Sunday morning.  I don't eat them often, and they hit the spot.  One of my goals during these days is to spend some additional time in spiritual pursuits.  I've managed two or three days a week, which is less than daily, but more than it had been, so that's a plus. 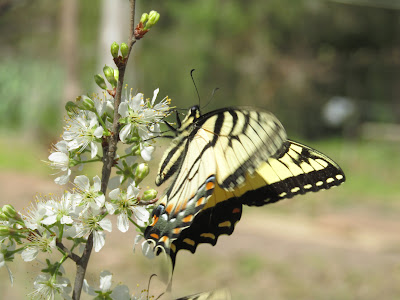 Many swallowtails are fluttering around, and several were on one of the plum trees.  I saw our first hummingbird at the feeder Sunday morning.  A new plant dye experiment was begun, using avocado pits.  So far, it looks very unimpressive.  The directions said to add 5-8 avocado pits, which would turn the water deep red.  So far, I've added 22 pits, with some color to show for it, but not deep red.  Well, I suppose that's why it's an experiment.  It needs to sit overnight, then the fabric can be added.  Maybe the sitting will intensify the color.  I'll report back on progress.  The peas are blooming, potatoes are sprouting, and there are tiny peaches and nectarines on the trees.  I have high hopes for this year's garden.  What interests are you pursuing these days?

I so love hearing about your week and all of your pursuits. I'd love the toothpaste recipe!
We've had our hummer feeders out for a week, but so far, no one has visited. We have had the yellow swallowtails though, which is always a treat.

Enjoy your week hunkered down!

Here you go. Mix these ingredients (I left out the stevia):

1/4 cup organic coconut oil (I'm sure non-organic works fine, if that's what you have)
1 tsp baking soda
stevia (optional)
15-20 drops of essential oils (I used a mix of cinnamon & clove EO's, and IPSAB)

Store in a small jar. Use a pea sized amount for brushing.

I haven't seen another hummingbird at the feeder yet, so I guess that one was passing through. But hopefully soon, they'll be at both our feeders.

Hi there!
Lovely photos and I enjoyed reading about your efforts to enhance the birthday celebration. Thank you for sharing. :)

I enjoyed checking out your blog. Thanks for commenting!

Lovely post. I, too, have fond childhood memories of the pussy willows!

First time commenting. I enjoy reading your blog. Last year I purchased some pussywillows
and they rooted my husband planted them and they came back this year, it was a nice surprise.
Everyone stay safe and healthy.

Oh good. Did you have to do anything special to get them to root? I sure do love them.

HI! we are pretty good here getting out only when we need to.
We put in some tomato plants this week, Fingers crossed. I am planning a few other edibles this year along with flowers for the butterflies.
I am amazed at all the swallowtails that are out.
Miss you, as this goes it's way I hope we can see each other from 6 feet. Hahaha
Much love to you and J

Miss you too! There are lots of swallowtails. I hope your tomatoes flourish!

I love reading how you (and others) are making it through these strange times. My husband and I are pretty much at home all the time: we do some work (our jobs), then pursue different interests. He works in his home business (his 2nd job, so to speak), practices timpani, and is doing those tasks around the house that get overlooked in busier times. I am baking more, writing some, taking a daily early morning walk and posting the results on Facebook, and also doing around-the-house tasks that always got shuffled to the bottom of the pile. It is finally getting warm enough to start thinking of a garden; I spent a good hour+ today starting to get the soil ready. We were not big on going out and doing a lot of extra stuff just to be doing something before this hit, so that has not been an adjustment for us to stay at home.

I loved hearing about your days. Thank you for taking the time to share. I didn't do any gardening today, but spent a lot of time weeding various beds. Wishing you a bountiful garden.

You got quite a bit done this week. We cleaned out junk and hauled recyclables to the dump but were turned away. They are shipped TO THE OTHER SIDE OF THE WORLD to China to be processed and since the supply chain has broken, they could not take anymore. The shipping containers are backlogged and sitting in ports. We had to haul our junk back home. Isn't that a fine pickle we find ourselves in!
Jeannie@GetMeToTheCountry

It sure is, Jeannie. Hopefully, we'll fix a lot of what's broken on the other side of this.

Regarding the pussy willow nothing special he just planted the pussywillow in a pot when he saw they had roots and after being in the pot for a couple of months planted them in the ground. Funny you mentioned Long Island that's where we live.

Thank you. Where do you live? I lived in Freeport when I was too young to remember, then Oakdale, then Seaford, before we moved to NC.

We live in Islip.

OK, well thanks for visiting and commenting.