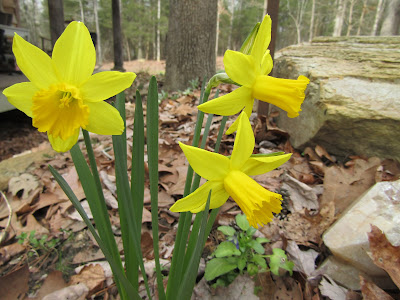 Hello, friends.  Last week, I ran errands after working in town.  At the grocery store, I found several things on mark down, including organic button mushrooms, shiitake mushrooms, good quality olive oil and organic honey.  I also found a new dog food, at about the same price as what I usually get, but which contains no animal meal and higher protein/lower carbs, a more natural diet for dogs, so I was happy about that.  After I got home, I weeded the rhubarb and asparagus beds, and transplanted several strawberry plants that had grown beyond their bed.  This is in a sunnier spot closer to the house, so I'm hoping we get some berries this year.  J pruned grapes, kiwi, and more fruit trees, planted red potatoes, and treated several areas of fire ants with orange oil and dried molasses. 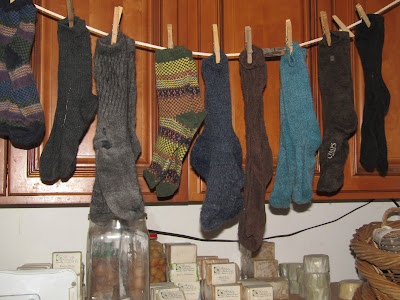 Sometimes I have to choose between doing laundry on sunny days or rainy days.  My preference is to be able to hang it outdoors, but when our rainwater tanks are full, and it's still raining, it seems a shame to waste the water.  So, I decided to do a couple of loads on a rainy day last week.  Wool socks and sweaters were hung around the house.  The daffodils and forsythia have begun blooming.  One day, I canned the marked down button mushrooms, adding four 1/2 pints and a 4 oz. jar to the pantry. I like using these on pizza, when I haven't got any fresh ones in the house.  We're making progress on the jigsaw puzzle.  On the days I'm home, I often stop by it a few times a day to add some pieces, but my favorite times are when J & I work on it together.  Paper and cardboard were shredded, vegetable bits added to the broth bag, and other fruit and vegetable bits to the compost crock.  A batch of yogurt was made.  One of our Ameraucana hens has been broody, so we put her in the broody area, which also holds our near blind rooster these days.  She's sitting on 8 eggs, and all is going well so far.  I sewed a button on a shirt. 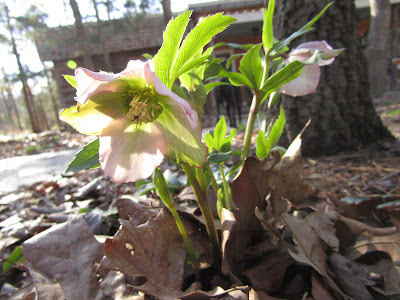 Much of NC had severe weather Thursday evening and night, which included lots of rain and high winds.  Many roads were impassable, due to high water and trees down.  We had a tree come down in an area of the garden where nothing is currently planted.  I worked the following day at one of my occasional jobs, and brought water, lunch and snacks.  I checked online for road closures before I left, and tried a different route, which also ended up being closed.  Thankfully, the third route was the charm.  Several things were accomplished during the down time between customers, including soap wrapping, a bit of bookkeeping, and some research.  Over the weekend, I gathered kale for a salad, pruned several things in the orchard, and drilled holes in canister lids to turn into compost crocks.  The hellebores have begun blooming.  The movie Sweet Land was enjoyed on amazon prime.  It looks like most if not all of the peas are up.  I changed out the straw in the nesting boxes, and brought the chickens greens.  Wishing you much love and happiness this week of Valentine's Day.

Another productive week! You certainly seem to find a lot of deals on organic food. I guess I am a "get in, get it and get out" kind of shopper, so I don't often spot those.

The weather was downright scary last week, wasn't it? Thankfully, I didn't have to be out in it and we stayed snuggled up by the fireplace and had loads of time to read. The best.

I will be planting strawberries and asparagus this year. Our local Extension Center has a yearly plant sale and I decided it was about time to add these two to the garden. Never tire of either one.

Enjoy your week! Hoping the bad weather stays away!

I don't spend a lot of time shopping either, but lucked out last week. I always look to see if there are good produce sales, and they had several carts of marked down items near the milk I was picking up. Snuggling by the fireplace reading sounds like heaven!

Happy Monday! I've been organizing and planning. Hope to put seeds into starter later this week.

My first response was "DAFFODILS!" My second response was a sigh of delight at the picture of the socks hanging. Just made me feel good to see that photo!

Love your socks hanging in the kitchen...a busy week for you ..good luck with your broody girl and her 8 eggs x

I've got "gather seeds" on my to do list, Denise. Hope we both get to it!

Warm socks are a wonderful thing!

Hi, Laurie! I love hearing about your gardening. It gives me hope and help for my novice skills in this area :) I have plans of eventually getting a couple of well-made stainless steel or maybe wood drying racks to keep in the house so I can hang laundry year round. We had a lovely and quiet week around here:
*I enjoyed getting to select the first round of books from other libraries in our state through our local tiny library. That will be so fun and a bit money saving since I will be able to give up the annual paid membership at the larger library.
*My husband turned a free pallet into a compost bin so I can start building compost for our raised beds.
*I’ve been doing some of the usual things like trying to stick to the budget to get money into savings, using pet food and packaging bags in place of trashbags, wasting as little as possible both in food and just in general daily living, and staying home a lot.
*More on my blog! https://www.cozyhomemaking.com/frugal-fun-homemaking-for-january-26-february-8-2020/