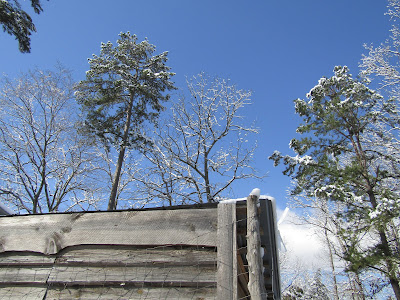 Hello, friends.  Last week, I applied to be an election official, and by the next morning, had my training scheduled.  Sadly, they were hoping I could work March 3rd, but I already had commitments, so will have to wait until the next election.  I finally finished getting my taxes ready to take to our accountant.  It seems there are many of us who are doing multiple things for income streams.  It sure does make it complex, with all the paperwork that entails.  Every year, I figure out one or two things that can make gathering it a bit easier.   The streams include massage, soap making, some of the bookkeeping/data entry for J's business, our home goods business, and ebay sales.  The soap making, includes my online shop, several galleries, a B&B account, shows, various in person sales to keep track of, plus several people who supply me things to pair with the soaps.  That's a lot of numbers to gather and crunch.  Combine that with the other streams, and it makes it quite a bear.  But then again, being your own boss makes it all worthwhile.  Working from home most days, and being able to decide what to do with each of my days is immeasurable, even if my income is significantly less than it once was. 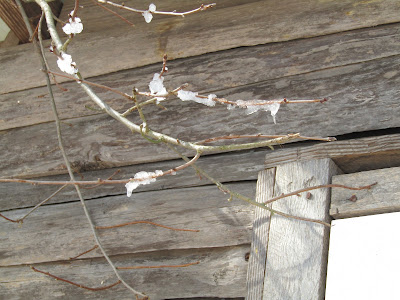 While in town last week, good deals found were avocados and cans of organic beans, both .89 ea. at Aldi's.  Another day, J & I ran a few errands and stopped to pick up a few things at Dollar General.  They had sweet sets of 8 pencils in their Valentines markdown.  I got several packs for .30 ea., which I plan to use in Operation shoebox boxes or something similar.  I didn't make any boxes last year, because I wasn't prepared, but keeping it in mind and stocking up when I find good deals will hopefully help me do it this year.  A batch of almond butter was made, after soaking the almonds over night.  Suet for the birds was made.  A movie was enjoyed on amazon, one via netflix, and two episodes of Washington. 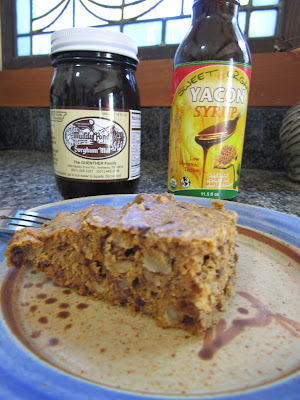 I tried a new, sugar free recipe, for Minnesota Harvest Bars, which I found in my copy of Jackie Clay's Growing and Canning Your Own Food.  She does recommend sprinkling them with powdered sugar, which I left off.  They're barely sweet, with dates being one of the main ingredients.  I also tried eating them with a little yacon syrup and sorghum, and thought each were good.  The yacon syrup has an especially low glycemic index.  The sorghum's index is slightly below honey, making these a slightly better choice for healthy blood sugar levels, though they should still be eaten in small amounts.  Our eggs and home grown squash were used in the recipe.  The squash that wasn't used in the recipe was frozen. 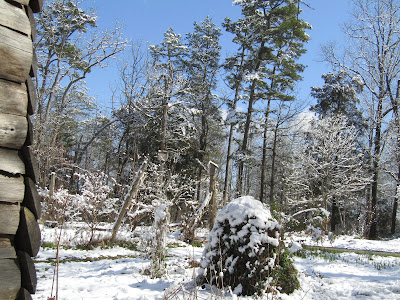 We had a lovely snow on Thursday, two inches or so, which has mostly melted.  On Saturday, orders were cleaned and powder coated.  Earlier in the week, I had made quiche, which used up leftover asparagus, frozen peppers and recanned olives.  With the leftover quiche, I steamed cauliflower, and made cashew gravy, a recipe I've been making since the 80's.  I only make it about once a year, and freeze the leftovers.  J prefers his cauliflower plain, which leaves it all for me.  The recipe comes from a well loved copy of Laurel's Kitchen.

Saute onions in oil until soft.  Stir in flour and cashew nut meal (I grind it in the coffee grinder) and cook for three minutes, stirring all the time.  Add the stock and salt and stir to blend all the ingredients.  Bring the mixture to a boil, then simmer until thick.  Add the parsley.  Makes an ample 2 c of gravy. 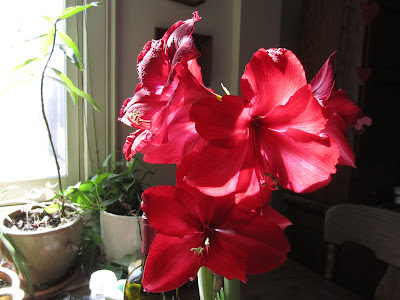 I have always used raw cashews for this.  If you try roasted/salted, it will most likely not need salt.  Even with raw cashews, I find 1/2 tsp. to be enough salt.  I've only used the gravy on cauliflower, as she suggests, but expect it would be good on many vegetables.  I like to mix up our green salads.  With the salads over the weekend, I added cubed beets, toasted pecans, a little feta, and chopped cherries to spring mix greens.  With some homemade berry vinaigrette, it was so delicious, I made it the next night, just changing the cheese.  A red amaryllis I bought in December is blooming all at once.  A dozen eggs were shared, and I bottled some thieves cleaning vinegar for a friend.  Though I had a lot of orders to pack on Sunday, I made it outdoors as often as I could in between.  It was a beautiful day, and I noticed the first grape hyacinths up.  J & I went through our seeds, food and other supplies, figuring out what we need to replenish.  Wishing you hopeful signs of spring this week.

Lovely amaryllis. I'd love to know how you made your almond butter. I tried making it and it didn't turn out. I soaked the nuts (as I am doing with all of my nuts, seeds, etc.), but I dry them in the oven afterword for storage. I'm thinking maybe there was not enough oil left in them to help it come together? I bought another bag and will try soaking but not drying this time.

Y'all got significantly more snow than we did, but it was lovely while it lasted.

I made the almond butter in the food processor, but it sounds similar to yours, as after many minutes it did not become creamy, though it feels smooth. It's an experiment to make almond milk (1 tbs to 1 c water) as I need it, which I haven't done yet, so I'll have to report back on how that goes. Loved the snow!

Cashew gravy sounds yummy! I might have to give that a try. I bet it would be good with a little nutritional yeast added to it to give it a cheesy flavor.

If you try that, let me know! I've been enjoying nutritional yeast on popcorn lately.

I just read where someone used the gravy over pasta, looking for a cheese replacement. I guess they eat no dairy. Sounds interesting.
I have not forgotten about the spring, but my time is eaten up for the next few weeks...how does that happen??

I hear you. Come get some turnips when you can.

Your almond butter recipe makes me wonder if once I make homemade coconut milk out of organic coconut shavings if I can then use the leftover shavings in coconut butter or coconut flour. I will research this! We had a lovely, quiet week with a bit more sunshine than previously although it was still cold. I spent most of the time in the house adding to the wood stove, although I did get out a bit to go to church, the library, and to get groceries.
*Got another load of books through the inter-library loan system. I got some fiction ones this time to change up the nonfiction and also got a set of the old Murder, She Wrote movies on DVD. So fun and relaxing to watch those! My 14yo daughter also started using this service for her fictional reading. I’m excited this will save us $25 per year by not purchasing a membership at the larger library in the next town :)
*My frugal fail for the week was going over in the grocery budget. I’m hopeful gardening season will help me with this.
*I got some small rebates back from Ibotta and spent a few minutes getting Swagbucks points in hopes of getting a gift card in the near future.
*More on my blog! https://www.cozyhomemaking.com/frugal-fun-homemaking-for-february-16-22-2020/

I have strained and dried the almond meal when I made almond milk, and it worked fine in baking. I did wonder if the process affected the flavor, but it's a good way to use it all up.