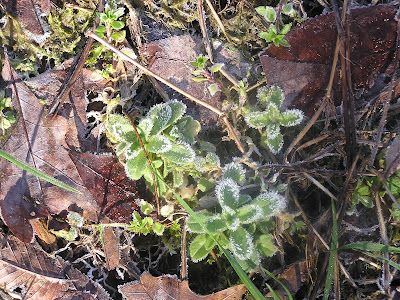 Hello, friends.  With temps in the teens, I put extra suet out for the birds, and gave extra scratch to the chickens in the evenings.  We also left the heat lamp on for the chickens some nights.  Morning walks with the pups have been frosty most days.  Eggs were boiled for us and the pups.  Another kitchen drawer was cleaned.  One of the things in my husband's current diet is green onions, but only the green parts.  I dehydrated the white portions, to put in the pantry.  J wasn't using kale as quickly as we thought he would, so I found a recipe that used some, along with mushrooms, which I bought last week and needed using too.  Cold days make me think of warm chores, so I caught up on my ironing.  Paper and cardboard from the shredder went in to the compost bin.  The new boots arrived, and will work well.   I need to seal them before hiking, but wore them for a night on the town, and they were comfortable and warm.  Happy! 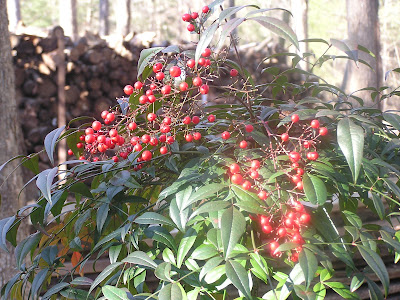 After working in town, I picked up a few things at the discount grocery.  While at Walgreens to drop off orders for Fedex, I used a $5 reward and purchased a 6 pack of large kleenex boxes marked down to $4.49.  I also got BOGO almonds.  Tractor Supply had sent a 10% off coupon, so I stocked up on chicken feed and cat food using that.  I got groceries at Aldi's, including 8 cans of organic beans @ .89.  I got more olive oil while there, as it's the cheapest I've found lately, at .15/oz.  J had the idea to ask the owner of the restaurant where they usually eat lunch, to see if I might be able to purchase it in bulk through his supplier.  I hope that pans out.  It's such a heavy item, shipping it is cost prohibitive. 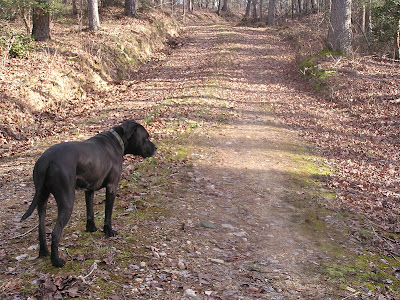 Staying on track, I cleaned another drawer in the kitchen island, a catch all or junk drawer..  I was embarrassed to find a few Christmas cards from 10 years ago, which means it hadn't been totally cleaned since we moved in the house.  It often houses garden catalogs, and those had been removed, but not the other items.  I started to beat myself up about it, then decided to pat my back for doing it now.  The chickens continue to lay well, and I was able to share a dozen with a friend.  While there, she gave me a beautiful piece of jewelry a local artist made, one that was her Mom's, but not her style.  While walking to the chickens, I noticed two lettuce plants in an area we planted last spring, which hadn't been there before.  I transplanted them with the other lettuce, so they could be covered with row cover on cold nights.  A pan of dried egg shells was crushed, to be added to the compost bin. 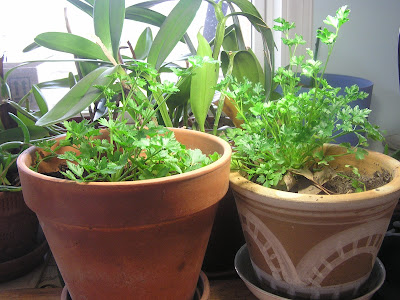 The parsley I dug and brought into the house seems to be thriving.  We had a bit of a warm spell, with highs in the 60's.  As it wasn't supposed to last long, and I had a bit of cabin fever, I cleaned up one of the flower beds.  Three heaping wheelbarrow fulls of prunings and downed sticks were dumped at the edge of our woods.  It's a start.  Needing to use the squash we grew last year, I cut up three butternut squash, and two spaghetti squash.   I baked a butternut squash crumble with half, and froze the remainder.  J ate some spaghetti squash, and the remainder was frozen.  I checked on the garlic, and it's coming along nicely, with more than half up now.  While doing that, I walked past the asparagus bed, which reminded me that should be the next bed cleaned up.  Always plenty to do around here, that's for sure. 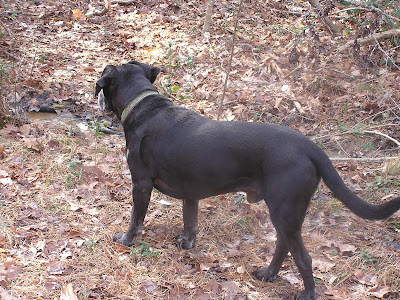 We bought postage stamps before the price went up, both for J's business and our personal use.  Between dropping off soap, and meeting a friend, I had a few minutes, and went into a nearby thrift store.  My computer monitor, which was bought used around 8 years ago, was starting to act up.  I had been looking online, but found one there for $10, which works great.  I've been wanting to work on organizing the bathroom closet.  It's one of the things I would have designed differently, in hindsight, as it's a narrow, deep closet, so difficult to get to things.  I found a long thin basket with handles for $2, which corralled a good amount of things.  I still need one more basket to get it finished, but there's progress.  Several things were thrown away, and a small bag of things, such as samples I've never used, will be donated.  Are you cleaning and decluttering too?  I've read there's a big uptick in thrift store donations, due to Marie Kondo.  Have a great week, friends.

OH! I need to get rid of things but I am not one to follow someone else to do so.
I hope to see you soon! Where is the time going?!
My parsley is growing outside but if we get some really cold weather this month I might be better to go dig it up.
Now to do that!

I still have several parsley outside too, but wanted to see if I could keep these two growing, as the outdoor ones freeze back in the really cold temps. J's protocol calls for 1 cup of parsley every couple of days, which is hard to find and expensive in the stores.

I love to see you little herbs growing so cheerfully! I think I'm getting in the mood for spring, even though it's pretty early around here:).

I love it that you have my blog listed as ones you read. I thought I'd let you know that I've completely switched over to the new blog now for new posts. It's at http://beckyathome.com. The old blog is still up, but all new posts are on the new one. (The old one has all the old posts, as well, as I had them transferred with lots and lots and lots of help from the support team at the new hosting platform!

Thank you for pointing that out, Becky. I have been to your new blog, but hadn't realized I needed to change the link. Spring will be here before we know it!

I am also cleaning out and throwing away except it isn't my stuff! My Mom has sold her house and moved into an assisted living apartment. Her house sold within hours and they wanted to take possession within days! We were caught off guard. Many things were hastily shoved into storage or into my basement. Now that Mom is settled, I can start decluttering her things. I look forward to the day I can walk through my basement again and be caught up on my blog reading.
Jeannie@GetMeToTheCountry

That had to be stressful! My sister, SIL, and I cleaned out my Mom's house, which was quite the chore, but at least we had all the time we needed, and only had to deal with it once. I feel for you, and hope it goes as smoothly as possible.