A Few New Animals on the Homestead & Frugal Accomplishments 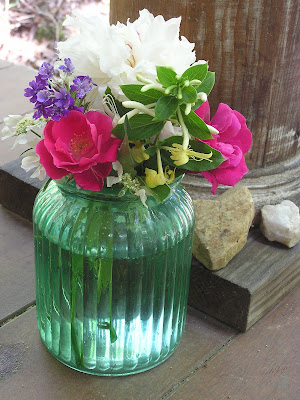 Hello, friends.  Last week was our first anniversary. We enjoyed a lovely dinner out on Saturday, paid for with a gift card we'd been given.  Our actual anniversary was on Monday.  I had saved and frozen a piece of cake from our wedding celebration, cut a bouquet for us to enjoy, and made ravioli for dinner, per J's request.  As it was our paper anniversary, we bought each other a book.  It was a lovely day.  To add to the celebration, our first chicks hatched on Monday, and a few were added on Tuesday for a total of 7.  The last chick to hatch was very weak, so I warmed and nurtured her/him for a couple of days, and it's back in with the flock and doing well.  Besides electrolytes I bought at the feed & seed, I gave it some of my watered down yogurt, and little bits of grain.  We were very doubtful at first, and are happy it made a good recovery, with just a little TLC.  On Saturday, she brought them outdoors for the first time, where they're learning to scratch. 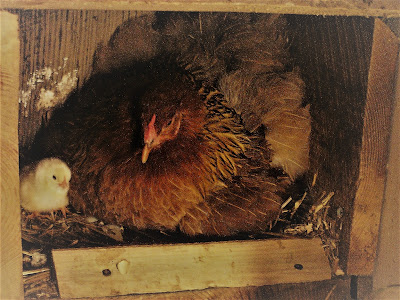 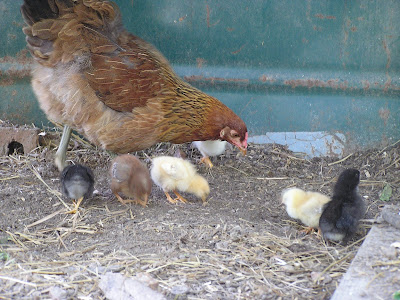 I changed out summer and winter linens and clothes.  It felt good to pack away the flannel sheets, and have nice, crisp cotton linens again.  J has been shredding leaves, and using them as mulch in the pond garden and asparagus bed.  I've been picking up the sticks remaining from the leaf piles for the next round of biochar, and have come a good way towards filling the barrel.  I harvested asparagus, broccoli, lettuce and kale.  A few salads were enjoyed, the kale was used in a kale salad, and the broccoli in a broccoli quinoa bake.  As I was already using the oven, I tried a new recipe for potatoes gratin.  It was very good, but took several times longer to prepare than promised in the recipe.  I think I'll try a simpler version next time.  Temps in the 90's have got me thinking of lemonade.  While searching for the lavender lemonade recipe, I came across one for honeysuckle lemonade, and decided to try that.  You begin by making a cordial, and I've got that mixed up.  If it's good, it will be nice to alternate between it, regular lemonade and lavender lemonade.  If you follow the cordial link, there are several other yummy sounding ways she gives to use it. 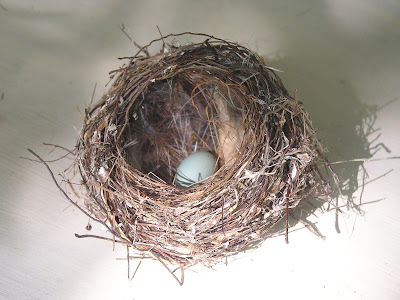 How wonderful it is to learn more about the beings that share this land with me.  There were two I had never seen or at least noticed before last week.   On a walk one evening, I came across a tiny snake with a yellow ring, and learned it is this one.  While at the kitchen sink another day, I saw a striped bird near the feeders.  While gathering honeysuckle for the recipe above, I spotted a much larger thrush in the garden.  I'm not sure if I'm seeing immature and mature ones, or different thrushes.  I found a sweet little nest on the ground near the pond one day, and a little blue egg on the ground another.  I did not see other eggs or a nest where I found the egg.  We'd had a thunderstorm the night before, with some good gusts of wind, and I suspect it may have been blown from the nest.  I'm sorry for the mama and baby, but I will treasure this gift from nature.  The female summer tanager has gotten braver this year, and perches on the suet feeder, just like the male. 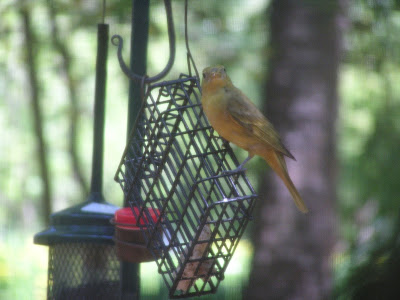 Hummingbird food, yogurt, and chick food was made, after wheat was ground.  A purchase was made using a 20% off code.  By going through swagbucks, and paying with my cc (which I'll pay in full), I received 3% off another purchase.   I received an ebates check for $5.38.  Not very much, but it all adds up.   I've just barely begun spring cleaning, now that we're finally done with the wood stove.  I cleaned a few small areas, and wiped down the kitchen cabinets.  There is much more to do, but it's a start.  One thing that's been on my to do list for a while is wiping down the vintage posts we used for the front porch with linseed oil.  I was able to cross that off my list, and also patched a small area with wood putty on one that had some rot.  On Sunday, I caught up with all that was in the original mending basket.  Well, everything I could mend with the sewing machine, and I also sewed a button on. There is still a nightgown to alter, and an iron on patch to apply.  Happy for progress. 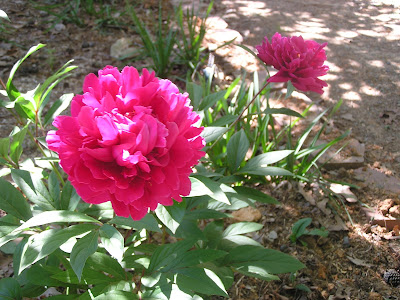 I did photo shoots for my new pumice stones, and created new listings for them in my online shop.  A ceramic canister I purchased recently was turned into a compost crock, photos done, and it was listed as well.  I hope to do the same with ebay items in the coming week.  Tomato seedlings that were large enough were transplanted into pots.  Most everything in the garden is growing well.  We've had to do some watering, but that's often the case.  It does look like voles may have already gotten into our potato patch, as J found a few wilted plants.  They sure are a challenge.  Deviled eggs were made with our hens eggs.  Honeysuckle and fringe trees are blooming, adding sweet scents to our days.  Wishing you whatever brings sweetness to your days this week.

How wonderful that you were able to nurse your baby chick back to good health!
Lavender lemonade sounds delicious. I really need to plant lavender again. My first attempt was unsuccessful.

Lavender lemonade is delicious, Michele. I'm getting ready to finish making the honeysuckle, and will post about that.

Baby chickies are so cute. Of course, we don't have any here in town, but we used to have them a lot at our old property. My husband took my nephew to the farm store to look at them, he's still talking about how cute they were.

Becky, I'm amazed at all you do with a house full! There are just two of us here. Soon enough, I'm sure the mending pile will begin again.

Life is so full for you all over there in your world called life, how it turned into mid May I will never know. Happy Anniversary and Happy life.