This and That & Frugal Accomplishments 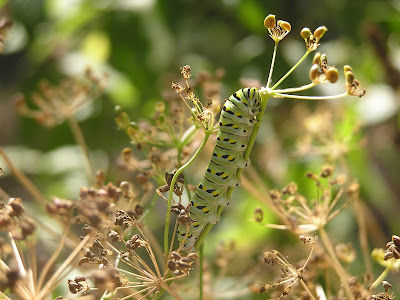 Hello, friends.  I hope your week was a good one, with whatever makes it so for you.  Last week, I strained jars of apple cider vinegar, and added the apples to the compost bin.  I think I've left the apples in too long when I've made it in the past, and hope this does the trick to make good vinegar.  I'm following at least one of the recipes I've seen, so we'll see how it goes.  I found this caterpillar of the Eastern Black Swallowtail on some parsley, which made me happy.

I've been researching, gathering and making in the natural dyeing realm.  I harvested some of the woad seeds, and let others fall to propagate new ones.  I've gathered oak galls and lichen on my walks.  I've learned oak galls are a good mordant for plant fibers such as cotton.  Lichen has been a traditional dye plant for Scotland tweeds.  Lichens can take decades to grow, so I am only gathering downed limbs that are covered with what I believe is mostly parmotrema, and pieces of cladonia aka reindoor moss that I find already uprooted by critters.  I gather the pieces that are already crispy, and either leave or relocate to a nearby more conducive spot any that are still moist.  There is a delight and reverence as I gather these gifts from the natural world.  I prepared an iron mordant by soaking used nails in a water and vinegar mixture.  This is used as an after mordant, and a good use for recycled jars. 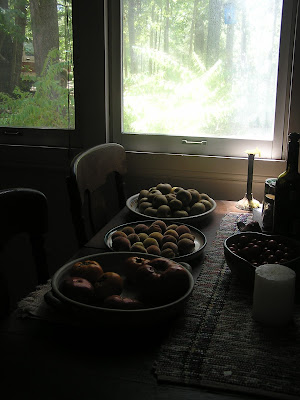 I walked every day with the pups for exercise.  This week, cucumbers, tomatoes, peppers, basil, okra, summer squash, apples, peaches, and our first figs of the year were harvested.  With cooler, temps, we've been able to open up the house most nights.  The past few weeks, I've used the toaster oven in place of the gas oven whenever possible to cut down on the heat put into our home.  I colored my hair at home.  I made my initial daily swagbucks goal each day, and redeemed points for a $25 amazon gift card.  I canned summer squash, and made Pasta Norma for dinner, which used our eggplant, onions, garlic, tomatoes and herbs.  It's funny, but as it was often one of the few if not only vegetarian options, I tried Pasta Norma at two restaurants while in Italy, and both times J and I agreed mine was better.   I suppose having home grown vegi's and herbs helps.  Canning water was used on outdoor plants and in bird baths.  J also uses the dehumidifier water to water outdoor plants.  It is still terribly dry here, and we try to keep things watered as well as possible. 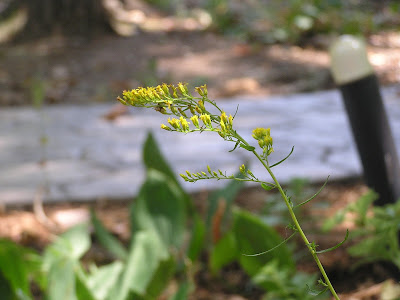 I've come to realize I should not can jams, jellies or butters in pint jars, unless they are going to be gifts.  The two of us just don't eat them often enough to keep from going bad once they're open.  A half pint jelly jar is a better size for us.  Two or three weeks ago, I opened a pint of apple butter, made before my epiphany, and there was still a bit more than half left.  Rather than watch it get moldy, I found a recipe for Apple Butter Bars.  In addition to our apple butter, it used our fresh apples, an egg, home ground wheat (I subbed half the flour with this), and homemade vanilla.  I almost never use icing on cakes, and left it off of this recipe.  We enjoyed it for dessert and breakfast.  I gratefully accepted three large boxes of canning jars of assorted sizes, which included a few rings. 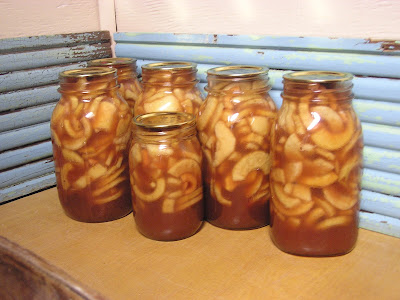 For the first time, I canned apple pie filling.  Our apples were quite small, and many had been chewed on by hornets and wasps due to the dryness here, so prepping them was rather time consuming.  I'm hoping a slice of pie once it turns cooler will make it all worth while.  My first attempt at using UltraGel was a bit of an adventure, but I've researched a bit, and will try doing something different next time.  I had followed directions for Cleargel in the recipe, but learned this product is an instant version.  I listened to free Pandora while I worked.  Two more jars of apple cider vinegar were started with the cores and peelings.  One night, I made a frittata using our potatoes and eggs.  Another night was caprese salad using our tomatoes and basil.  Tomatoes and garlic went into a tomato rice loaf another night.  I wanted to use up a little bit of leftover peas, so added that to the loaf as well. 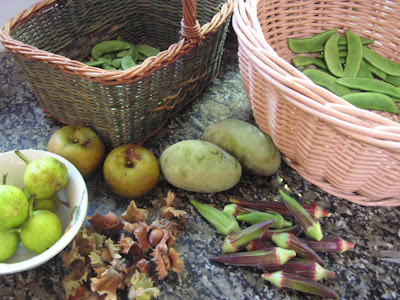 Today's garden harvest was a little of this and that... some okra, two apples, pawpaws, the first of the lima beans and some volunteer butter peas.  On my way to check the figs, I noticed there were several hazelnuts on the ground, so those got gathered too.  They're small and I think a bit early, probably due to lack of rain, but I hope that will be remedied tonight and tomorrow, and maybe again this week.  There are cherry tomatoes to harvest too, and maybe some larger ones.  For now, there are hazelnuts to dehusk, and beans to shell.  We grilled tonight, with okra, summer squash, asian cucumbers, brats for the guys, a neighbor bringing roasted potatoes.  I was hoping for ice cream, but ended up making a cobbler with our peaches.  Wishing you peace and good things this week!

You are quite busy in your life, but there is an underlying peacefulness that comes across in your writing. It makes me feel peaceful inside as well. Here in my area, in mid winter Moss turns a golden color as it blooms. It's painfully lovely in winter to drive down a red dirt road and find glowing gold on the roadsides.

That sounds just beautiful, Terri, the combination of red dirt and golden moss. I appreciate your lovely comment about peacefulness. It's something I'm always striving for.

I love that pix with the baskets and veggies. You can also use your apple butter (unless very thick) like applesauce replacing oil in certain recipes. Obviously you'd want to consider the flavor in the recipe - but for pastries yum.