Fall Cleaning and Color, and a New Chicken Coop 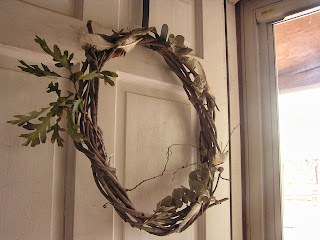 The first piece of fall cleaning has begun on the homestead, with window washing.  I've done it in stages, fitting it in between other things.  It's a bit interesting, as almost all are salvaged double pane windows.  They looked good when they were first installed during construction of the house, but in the years before actually moving in, many of them began leaking, causing haze and splotches in places between the panes. At that point, it was more important to have a warm & dry home to live in, and get out of the horrible, leaky 60's era trailer I'd been living in.  Someday, maybe they'll be changed out.  In the meantime, I'm grateful to have windows, and a home that makes me happy. 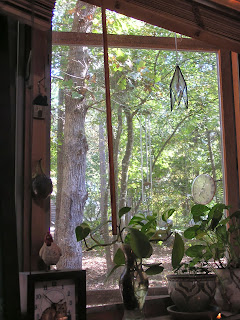 Blessedly, the main double window I look out was a new one, a high-quality one some friends had left over from their construction and sold to us at half price.  It's the one above the kitchen sink.  Not only do I spent a fair amount of time there, but it also looks out on the path that comes from the driveway, and the shop across the way.  I'm down to washing the last window.  It requires the big extension ladder to reach, which is the only reason it's not already done.  Joseph moved the ladder there for me just before he had to leave this afternoon, and I thought it best to wait until someone else was around, before climbing up a tall ladder leaning against the house, out here in the woods. 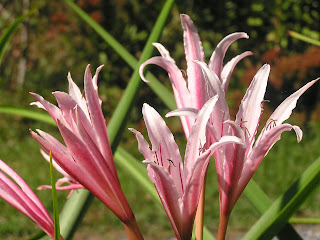 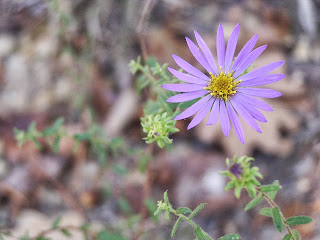 Not much was abundant in this years garden, but there were lots of beans.  We shelled a good amount of lima beans and crowder peas fresh, which I froze.  Right about the time of our Norfolk trip, we lost the race, and we now have oodles of dried beans to shell. There are a large pile of beans on a towel on the great room floor, awaiting shelling, and many more still on the vine.  I've been known to take them with me when I'm shop sitting, and shell them between customers.  If they see what I'm up to, they're sometimes intrigued.  These days, it's not all that common a task to many folks.  I have had one customer who gardened get very excited about the lima beans, which have been handed down for generations in Joseph's family.  I sent her home with a handful to plant. 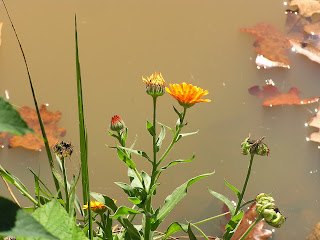 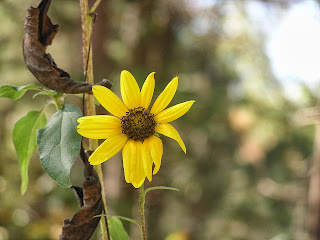 There is still a surprising amount of color and blooms.  I'm enjoying it while I can.  The first night in the 30's is forecast for the weekend.  I figure the first frost can't be too far behind.  Houseplants will need to be brought indoors this weekend. 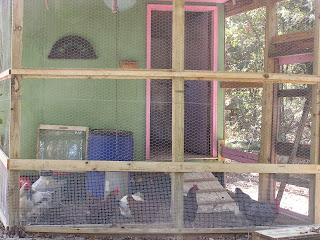 We finished phase 1 of the chicken coop last weekend.  We've got plans to collect rainwater, and install an automatic watering system.  We may even rig up a solar-powered door opener and closer at some point.  We intend to give them a much larger yard, with areas we close off and rotate them through, so there are always fresh greens for them to eat.  We do like free-ranging them in the evenings, but there are spells when the predators wreak havoc on our flock, and we'd like to be able to keep them safe and eating well. 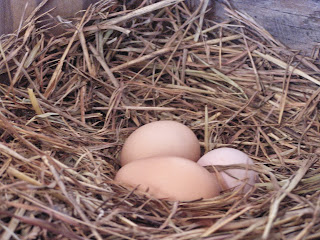 They spent their first night in the new coop on Saturday.  I think they're happy.
Posted by Laurie at 9:47 PM

Beautiful! I especially like the idea of going around with beans to shell a.k.a seed to share.

The coop is beautiful.
I use to do foolish things when I was younger, but am more thoughtful about those things now. No ladders when alone is smart.

Me too, Camille. Thanks Meredith... it suits me.

Thank you for such grounded thoughts and soothing sights.