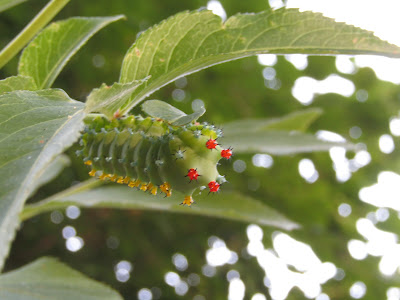 Hello, friends.  One night on the way to closing up the chickens last week, J saw an interesting caterpillar on the elderberry, which he brought me back to see.  It turns out it's the caterpillar of the Saturniid Moth, the largest of the North American moths, which is pretty cool.  Daily, I hand-pick Japanese beetles, most often multiple times a day, and feed them to the chickens.  The beasts are eating our apples, as I can't reach many of them (warning: gross photo below).  Hopefully, they'll leave us some.  There were additional free cabinets besides the ones J put in my workshop.  I've been wanting some sort of cabinet in the chicken area, to keep oyster shell, treats like mealworms, and any medicines and supplements in.  He installed the other cabinets in there for me.  To use up the last of honey in a jar, I made a cup of tea in it, then poured it into a mug.

A canner full of tomatoes were canned midweek, adding 7 quarts to the pantry.  The pineapple tomatoes have been really large this year, with one weighing over 1# 9 oz.   A few chanterelles were found on walks during the week, and foraged.  A yellow squash and tromboncino were used in a saute, with basil, oregano and tomato.  Some kale was harvested, and mixed with lambs quarter, homemade broth and garlic for a side dish.  A pie was made, with mostly blueberries and a few blackberries.  I mended a sweater, a shirt and a nightgown.  I tried a new recipe for black eyed pea salad, which I learned about in an article on Juneteenth.  It was enjoyed for dinner and lunches.   An avocado caprese salad went with it for dinner.  When I wore a shirt I realized I didn't love, it was added to the donate box after washing.  Eggs were shared with J's business partner, who had shared cucumbers and a quart of honey with us. 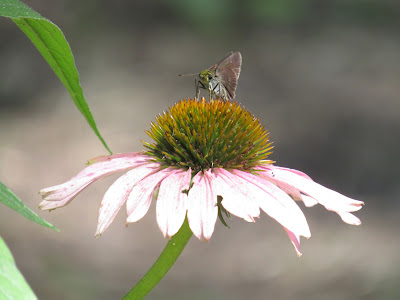 We had to drive over an hour to pick up a track J found on fb Marketplace.  He set it up to move our painted orders into the powder coat oven, so I won't need his assistance with this in the future.  Being able to paint orders any time I'd like will be a blessing, instead of having to do marathon weekend sessions when he's available to help move them into the oven.  When there's time, I always look for a discount grocery in any new town, and found one nearby where we picked up the track.  Unfortunately, it wasn't one that carried what we eat.  At least half of the store was frozen goods with lots of meat, snacky junk foods, and much of the rest was restaurant sized sauces, mixes and things.  I didn't see any organic items.  J did get two Grey Poupon mustards, but at $1 ea., I'm not sure that was much of a deal.   I stopped for gas on the way home, and filled up at $2.79/gal, which is .20 cheaper than the local stations, so that was nice.  At a baby shower I attended, I brought comfrey plants for one of the women, and was gifted some sweetgrass. 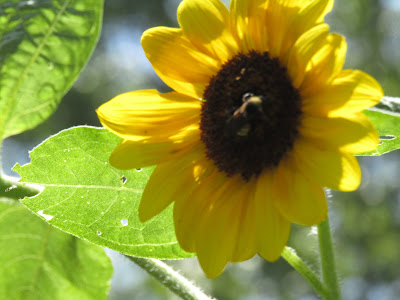 I harvested a tromboncino squash, blueberries, a few blackberries, basil, oregano, and a cucumber, and spotted the first bloom of the yard long beans.  Our first eggplant is growing.  After agreeing to delay an amazon shipment, I received a digital credit.  A movie and a series episode were enjoyed free on amazon prime.  Two loads of laundry were hung on the line.  On Sunday, there were lots more tomatoes to can.  Several were given to our son, and 13 quarts were canned for the pantry.  Before the rain started, I planted the last of the celosia started from seed, and a tomato stem that had rooted.  On our evening walk, I gathered several chanterelles and an old man of the woods mushroom.  There was just enough of our broccoli to make broccoli mac & cheese.  J found our first ripe fig, and harvested it.  After several days of having the a/c on, it finally cooled off enough Sunday night where we could turn it off and open the house up.  We love the fresh air, not to mention the savings.  Wishing you a comfortable week, in whatever weather you find yourself in.

I've been doing the same thing with our beetles. The chooks just love 'em and come running when they see the tin can that holds their treasure!

You are harvesting so much food! I feel like my garden is on hold, still waiting for beans, squash and melon. I did harvest some beets last night.

What an interesting caterpillar! I thought it was a hornworm when I first saw it. Glad you could id it.

I hope you were blessed with some of that glorious rain! We got an inch and a half, so the plants are happy here.
Have a great week, Laurie!

So thankful the chickens will eat the Japanese beetles! I used to have a pup who loved to eat them too! We saw the first tiny beans last evening. I'm glad you're getting beets. I hope to find a place to plant some soon for fall. Very thankful we got 1 1/2" too.

LOVE your bug pictures. The caterpillar photo is absolutely stunning!

Thanks, April. I thought the caterpillar was pretty special.