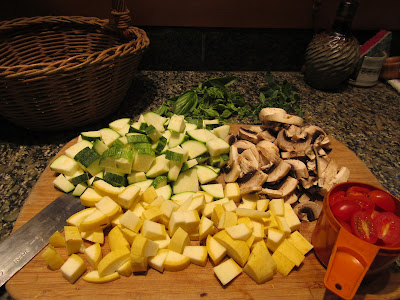 Hello, friends.  Last week, J's business partner gifted us a bag of summer squash he grew.  The yellow squash were picked a bit late, so I cut out the large seeds in the middle, and added it to the broth bag.  No waste.  It was lovely to have the squash now, as our tromboncinos are still pretty small, and our yellow squash is taking it's time growing.  Basil and oregano were harvested for a saute using the squash.  I cut more oregano than I needed for the recipe, so dried the remainder.   I earned $12 in rewards at FL, and got .79 avocados & dogfood on sale for $6 off x 3.  When I asked J to level our refrigerator, he found the coils were pretty dirty.  Only the front ones could be reached with the vacuum, after removing the front panel, so he got his air compressor, and blew the rest off.  It inspired him to change the filters on our air returns too.  Hopefully, these things will now run more efficiently and cheaply. 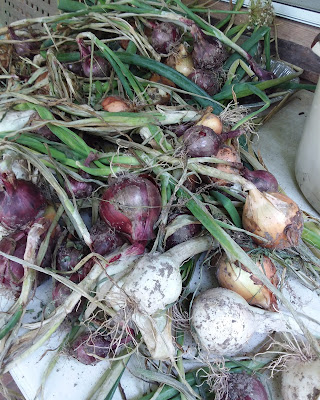 J harvested our onions, and worked on creating a swale in the garden, which he's been wanting to do.  There's one corner that stays too wet, and he wanted to remedy that, which he finished before we got a nice rain.  On Sunday, I noticed the first tomato just beginning to ripen.  It can't happen too soon.  The dogs were bathed in the outdoor shower.  We had a couple of cool mornings in the 50's.  On one, the ironing was caught up.  On the other, I cleaned the chicken coop.  I usually do it much earlier in the spring, but my hands were raw for so long, I didn't think that was wise, even with gloves.  Thankfully, they're 90% better, though were not very happy after the dog bathing. I should have worn gloves for that too.  Lesson learned. 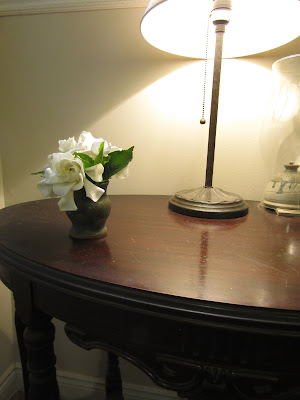 I've enjoyed harvesting blackberries and raspberries.  I also harvested basil and rosemary for pasta sauce, which used our tomatoes, onion and squash from the pantry.  A bouquet of gardenias and another mixed bouquet were cut for enjoying in the house.  I went through Swagbucks for 4% back on a purchase.  On another purchase, I found a $10 off coupon code to use.  Both purchases were items needed for our little side business.  Our electric bill went up $40 this month, not unusual when we go from wood heat to a/c, even though we open up each night.  I virtually attended our annual electric co-op meeting, and found out they're going to be raising rates later this year.  It's been 5 years, so I suppose I can't complain.  Two books were requested from the library.  I won a cookbook from a giveaway on a blog I follow. 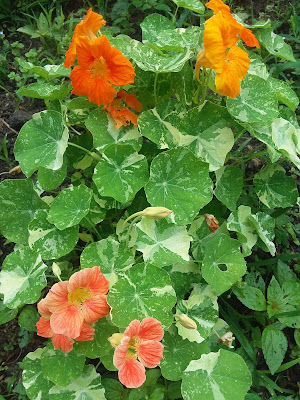 As suspected, M caught a deer nibbling on our thornless blackberry on his webcam.  He also caught a cardinal, which I'm sure was looking for, if not nibbling on the berries.  We're going to try a cage around it, with some netting.  Just about every day, I'm noticing more plants that are deer browsed, which is pretty concerning.  I suppose I've been very lucky, but in my 25 years here, they've stayed away from the gardens and orchard, until they munched the peanuts and sweet potatoes in the pond garden last year.  This year, they're even braver, coming up to the main garden and orchard. A neighbor told J he's seen them often this year out by the road.  It's wooded between the road and our garden area, so we had no idea.  Our main garden fence is only 4' tall, and I can tell they've been in there already.  It looks like we'll have to do something, if we're going to keep growing food as planned.  I'm not really sure what they might eat, though the beans are a concern.  There's a whole bevy of things that want to eat our food, that's for sure.  Many wishes you have a most lovely first week of summer!

Yes, it seems in our area, with developments popping up willy-nilly, the deer and other critters are being squeezed out of their habitat. It makes me sad. Looks like an 8-foot fence might be in your future.

When my eczema was at its worst, I wore gloves for everything-cooking, cleaning, showering, gardening. It's a blessing to be able to feel the soil in my hands again. Continued healing to you, my friend.

Thankfully there's little development here, as the soil doesn't perk well, but areas are timbered, so still a good amount of habitat destruction.

With the eczema, were you wearing vinyl/latex gloves? My hands didn't seem too happy with those, so I'd wear cotton gloves underneath them when needed, but man is that bulky. I wear just the cotton gloves when painting orders, but of course that doesn't work when dealing with water. Thank you for your continued encouragement. They're so much better, but I look forward to 100%.

You may have a latex sensitivity. I wear Nitrile gloves when necessary. I have worn the cotton gloves underneath, but you're right, it makes things a bit more cumbersome. Now I use the chickweed salve each night and wear the cotton gloves over. It has helped tremendously. Blessings...

Yes, I do have a latex allergy. They don't seem too happy with the nitrile ones though. I'm glad you found things that give you relief. I'm really hoping this isn't going to be a challenge from here on out, but at least I know some things that help now. Many blessings to you.

You beat me on the first ripe tomato. We have one that is beginning to turn and I keep checking it every day. Why, oh why, does the first one take forever?

Good luck keeping the critters out of your gardens. We are fighting them constantly. Right now our one blueberry bush is wrapped up tight with sheets and bungee cords. Glows in the dark like a ghost at night outside my bedroom window. Every berry matters - we will continue to fight!!!