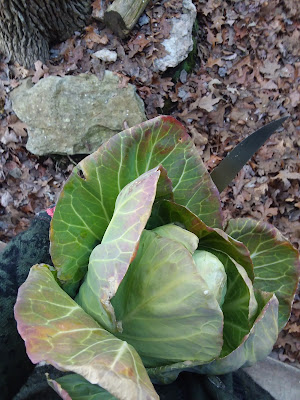 Hello, friends.  I hope you felt surrounded by goodness and love on Valentine's Day, even if your day was spent in your own company.  Last week, I harvested a cabbage, and made cabbage and noodles for a dinner.  There was one unseasonably warm, mostly sunny afternoon in the mid 60's, so I changed my plans, and worked on winter sowing.  I prepped a dozen containers, which involved drilling holes, cutting them across the middle, and filling with potting soil.  I ended up seeding 4 containers, all dye plants, before running out of daylight.  It's been a rainy week, but I'll get back out there soon, and seed some more containers.  Spending time outdoors on a gloriously warm, sunny day did my heart good. 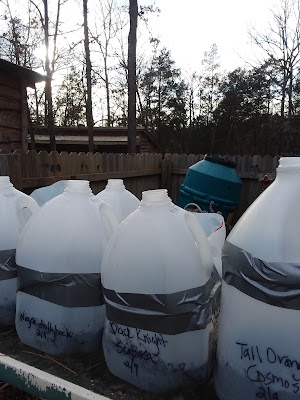 I read Tuesday afternoon that it was National Pizza day, and decided to play along.  I made a double batch of dough, a mix of whole wheat and white, and parbaked and froze the second crust for another time.  Toppings were our pickled sweet red and frozen green peppers, eggplant cubes I'd roasted and frozen, home canned mushrooms and olives, and homegrown garlic.  There was plenty of sauce made, and some was frozen.  A salad rounded out the meal.  A load of laundry was hung on the line my one window of opportunity.  Though it's not my preference, two loads had to be dried in the dryer over the weekend, and wool socks were hung all around the house to dry.  J requested potato soup and waldorf salad for a dinner.  Parsley was harvested for the soup.  I made cranberry bread with leftover sauce and the last of the pear cranberry jam and homemade buttermilk to have for dessert. 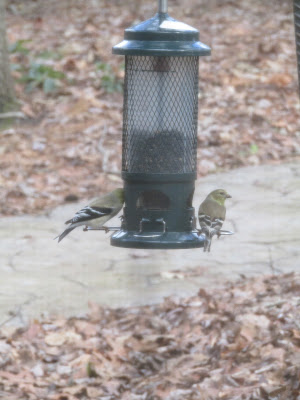 I had to go to town on Friday, to buy paint for a custom order, and ran errands while there.  It was some time in 2019 that I last went to the Asheboro discount grocery, as there was less and less food, and lots more other stuff, which I'm not interested in.  I'd messaged them recently, and they said they'd gotten some food from Costco, so I ran by there.  They opened a back room for even more stuff, and there was pitiful little food.  I did find honey-sweetened ketchup, and got one to try.  My intention was to then head to the newer discount grocery, where I've found some good things, but the owner and my schedule just don't seem to jibe.  She'd told me she'd be open until 5 (I've learned to check first), but then received a message that she was leaving for lunch (at 11:43), and would be back no later than 2.  I really have a hard time comprehending how someone can run a business like this, as it's the third time I've known of her being closed during her posted business hours, and I've only attempted shopping there a handful of times.  I'd love to support her, but expect she'll be out of business before long. 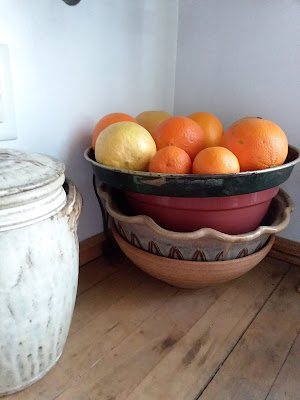 At the grocery store, between a sale, coupon and rewards, I saved $19 on two bags of dog food.  Avocados were .55.  Organic blueberries were $2.  Asparagus was $1.49#, and I got 3.  I picked up 2# of organic butter for $4.49, the best price I've seen in a very long time.  I do wish I'd see a good sale.  I filled the car when passing a station with gas .11 less than it is closer to me, saving .80.  After getting in on Friday, I decided to make a green bean casserole.  It used two quarts of our oldest green beans, and what's left in the pantry is now from 2016 & '20.  There weren't enough fresh mushrooms, so I rehydrated some of the maitake for the remainder needed.  I also tried a new cauliflower recipe, with kalamata olives and lemon pieces.  It was good, but the lemon pieces were a bit much to bite into, so next time, I'd just use the juice instead.  A few more hours were spent working on taxes.  I've been enjoying free movies on Prime.  J is thinking about cancelling it, so I've been trying to catch up on my watchlist.  I found a list of the Superbowl commercials, and watched them.  I thought the Chipotle one was good, but my favorite was the Bud Light lemonade one.  I've watched it several times, and it still makes me LOL.  It seems so appropriate for 2020.  Have a lovely week, friends.

A lot of good shopping information today! I skipped the halftime commercials this year...may just go find that one you mentioned. I had family in Tampa, so that was my choice, but I quit when it was pretty certain they were winning, and I went to bed. Love hearing about your starting new plants going. I can tell I'm going to enjoy hearing about your garden this year! I'm a container gardner in an apt. these days.

I hope that commercial gives you a laugh. We don't watch the Superbowl either, or any sports for that matter, but I search out the commercials to amuse myself. Do you discuss your gardening on one of your blogs? I'd be interested in hearing about your efforts as well.

I too enjoyed that warm day! It was so nice to spend time in the garden and just be outside. The cold and rain that has followed has been a little depressing. I am looking forward to Spring.

I agree, Michele. The first of the daffodils are creating buds, and I saw a few blossoms on the winter jasmine. Spring is coming.

I didn't know it was pizza day, but made pizza on Saturday! I guess it just tastes good any day!

How frustrating to try to patronize a shop and not know when it will be open! Glad you were able to get a few things.

I've been craving pizza lately, but now that I can't have tomatoes, I will need to come up with a pesto recipe to use on the crust instead.

We enjoyed that same sunny day last week and it was cherished! More rain this week, and it's one big, muddy mess out there.

Yes, I bet it was just as good on Saturday, Becky! Yum!

I bet you'll come up with a good pizza sauce substitute. I bet a garlicky olive oil would be a decent base too. Well, if you like garlic as much as I do :o).

I enjoyed the same warm day last week by dropping everything and working in the garden. I planted onions and leeks in the back corner of the garden. It felt so good to be outside even if it was only for one day. Hubby and I sat out on the front porch and watched the sun go down. It has made this ice storm more bearable knowing it will end soon.
Jeannie@GetMeToTheCountry

I felt the same way, working outside. How nice to get your onions planted. Ours didn't arrive until a few days later. The ice storm is supposed to arrive here tonight through tomorrow. Stay well.