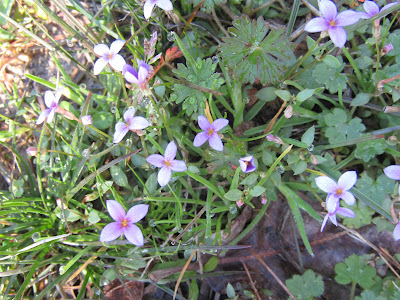 Hello, friends.  Several varieties of little purple flowers are blooming, which I'm loving.  Apparently, banana peel bacon is a thing.  They say it's really, really good, so I may have to give it a try.  I do buy Morningstar bacon for BLT's and the occasional recipe, but it would be nice if I could make a version from ingredients I had at home. If you've tried it, I'd love to know.  I created and planted a new flower bed for pollinators near the garden.  A batch of yogurt was made.  Chickweed was gathered for the chickens, the pups and for our salads.  Pasta sauce was made using our tomatoes, basil, oregano and garlic.  J & I planted 16 cabbage plants and two black currants.  It felt so nice to be outdoors with my hands in the dirt on a sunny day.  More of the wintersown plants are sprouting nicely.  The rhubarb is growing, and two of the potatoes planted weeks ago are up.  J & I created a new bed for some of my dye plants, which I've covered with cardboard.  I've begun gathering bricks to edge it.  I'm using fire bricks that were given to us, so cost nothing.

J tilled the areas of the garden that are not in containers or raised beds, and planted potatoes and onions.  He also planted seeds for several varieties of tomatoes, eggplant and sweet peppers in the truck toolbox he turned into a mini greenhouse.  It worked really well last year, and makes for much less work than planting in seed starting containers, moving them indoors and outdoors daily, and watering daily or more.  Every year we learn something new about gardening.  We're talking about using more raised beds in the future, with some sort of walkways that won't allow weeds, trying to figure out how to cut down on labor as we age.  Several beds were harvested, to make room for new plantings.  A bed of winter greens was harvested, and collards that were in the tool box, which were shared with my sister.  The broccoli was pulled up.  After the initial harvest, and several harvests of side shoots, they were dwindling.  I still got just under 1/2 lb., enough for one meal.  Here is an interesting and timely article on the science of soap.  A concert and a trip to the mountains were canceled.  While I am sorry I won't be seeing the Downton Abbey exhibit, it will be a significant savings. 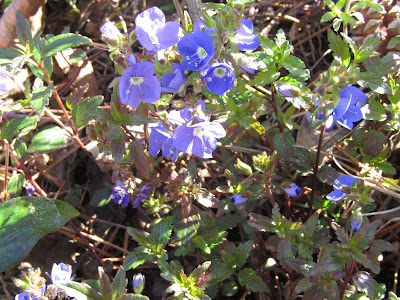 Life is full of big and small changes at the moment, all over the planet.  I'm loving seeing all the wonderful ways people are coming together... a hotel in Ireland that is delivering free food to those who need it, neighbors coming out on their balconies all over Italy to share music and song, and to clap in gratitude for health care workers, people sharing their groceries in the US.  Maybe this crisis is to remind us we are all in this together, and that is what is going to be required to make it through this.  How wonderful we are rising to the challenge.  One thing we can do in the coming days is self care.  I'm going to try the recipe in the link for coffee body scrub.  I also made an easy DIY toothpaste, from a recipe posted in the waiting room of the holistic dentist I've been visiting.  To make it, mix:

1/4 cup organic coconut oil (I'm sure non-organic works fine, if that's what you have)
1 tsp baking soda
stevia (optional)
15-20 drops of essential oils (I used a mix of cinnamon & clove EO's, and IPSAB)

Store in a small jar.  Use a pea sized amount for brushing. 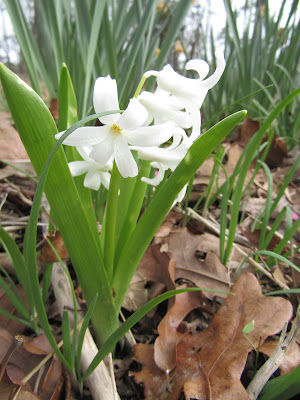 With several warm days and nights, we went without heat for several days, and had windows open as much as possible.  J picked up a handful of things at the grocery store, but I didn't do any grocery shopping last week.  J decided to grill on Sunday.  Besides some "beast" for he and M, he grilled homegrown eggplant and okra from the freezer, potatoes that he cut the sprouts from, and I made a winter salad.  We were all happy campers.  The hyacinths have begun blooming.  Jars of thieves vinegar were bottled.  Bird suet was made.  I made iced tea from dehydrated lemon balm, lemon verbena and lemongrass I grew last summer.  Local honey was used for sweetener.  Lemon balm is a strong anti-viral, so I will try to keep this tea on hand in the coming days.  I dug a clump of lemon balm, and shared it with my sister, as well as eggs and a pumpkin.  We took a walk while we were together.  Lettuce was harvested from the garden, and eggs were collected.  All is well on the homestead.  Stay well, dear friends.

Isn't it wonderful to be able to share some of the good things coming out of this mess. I'm hoping that folks will rethink the way they are living their lives. Perhaps this will encourage more homesteaders, more scratch cooking, making self-care products, sewing, knitting and the like. I think many people just wander through their lives without purpose. Maybe this will help us all become more mindful on a daily basis. Now, that wouldn't be such a bad thing, would it? ;0D

Sounds like a great way to take some down time and be productive.

Yes, I do believe it will shift some people's thinking to a more purposeful life. Though this week is looking similar to most (ie: the B&B still wants soap delivered), I wouldn't mind it a bit if the coming weeks slow down. There are many ways I can think of to enjoy that time, including some relaxation.

I have never heard of Banana Peel Bacon. Sounds, uh, interesting. We may have to try it.

Your garden harvest sounds lovely! We have tomato and pepper seeds planted, and I saw this morning that many of them have germinated. I hope to plant a few other types of seeds this weekend. Hopefully we can get a good amount of things growing over the next 6 weeks or so (when our last frost is predicted).

I have been avoiding the news and I'm not big into social media, but I haven't been completely away from the virus media talk. I also enjoy hearing about the good that is coming out of this. I love hearing of people helping others. It's really the best way to live :)

Wishing you a blessed week!

The banana peel bacon was new to me too!

That's wonderful you have tomato and pepper seedlings up, Jenny. Our average last frost is in about 4 weeks, but it looks like we're done with the cold through the end of March, unless it changes. I don't watch TV, except for the occasional show on our new Roku TV. Somehow, reading or hearing about the news from my husband doesn't seem as stressful as seeing it. Yes, doing good is the best way to live!