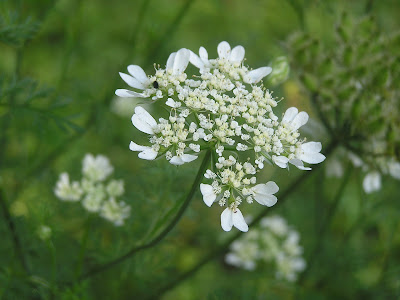 Hello, friends.  On Monday, I harvested stinging nettles, lambs quarter and lettuce.  Now that the garden is getting very weedy, I'm finding more lambs quarter.  J is going to mow and weed eat the garden soon, and I intend to harvest more purslane and lambs quarter before he does.  I began a batch of medicinal tincture with the nettles.  A batch of yogurt was made.  I helped J set up the posts, rebar and string for the beans, and set up a wire trellis for the cucumbers.  He replanted the squash that had died.  The lambs quarter was blanched and frozen.  I added some of the purslane to our salad, and like in the burritos, it mixes right in with the lettuce, and is not noticeable.  A great way to get some omega 3's.  I had a jar of poppy seeds that were getting old.  I started to give them to the chickens, but decided to see if any might germinate, and sowed them in a couple of places.  One of my tasks while working last week was to keep several flower pots watered.  Two of them had Oregon grape shrubs in them.  There were a number of fruits that had fallen off, so I grabbed a few and put them in a pot, to see if the seeds might germinate.  The plant has edible and medicinal benefits, so I hope they will grow. After work on Tuesday, I ran errands.  I stopped at Lowes for marigolds, as mine didn't come back from reseeding this year.  There was a pack of 8 for $10.98, which I thought was rather pricey, so I headed to the mark down area, and found lots more.  In addition to a full price German thyme, I bought 3 dianthus @ $1 ea.  They looked great, so I'm not sure why they were there, unless it was because they were finishing blooming.  I also got 7 celosia for $2, and 16 marigolds for $3.  There were 3 colors of marigolds altogether, so I was happy I had looked.  I ran into someone I knew, and we caught up as we rummaged through the plants.  I'm loving all the different pink blooms right now. 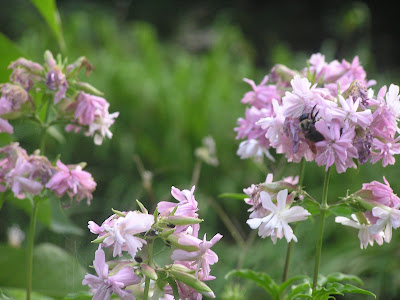 Tuesday night, a friend and I went to see this movie.  The cinematography was beautiful, and it was a realistic look at the challenges of growing food.  Wednesday morning, I went into my studio to meditate and found parts of a bag of rat poison.  Apparently, while I was out Tuesday night, McNibs got into a kitchen closet, and moved the recycling out to get to it.  J found the recycling a mess when he came in from dealing with a customer, but didn't go into my studio, so hadn't realized.  I got McNibs into the vet first thing Weds. morning, and got Vit. K started.  The poison is not usually anywhere the pups can get to, but this one somehow ended up there.  He's acting fine so far, but it can take a few days for the effect to kick in.  We're not sure how much was left in the bag.  He's a big boy, so we're praying he'll remain healthy.  I spent most of the rest of the day in the garden, weeding and harvesting a good amount of lambs quarter and purslane.  I got some things accomplished, and it helped me de-stress from the morning.  J weed-eated the garden after I was done harvesting. 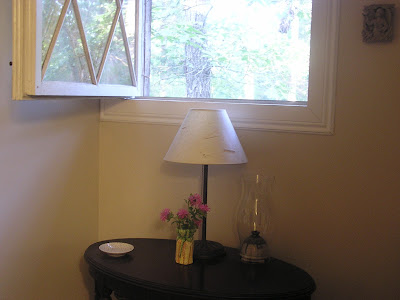 The Carolina wrens have been busy building nests.  We noticed the first one on top of a porch post, but, for some reason, a couple of days later, I found all the nesting material on the porch floor.  J thinks another bird did it.  I next found one in a pot with soil in it neat the outdoor spigot, with mama and eggs inside.  Then, I saw one of the wrens flying into one of the houseplants that is spending the warm months outdoors.  Sure enough, when I looked a bit later, there's a nest there too.  The tomatoes we had planted in our new containers weeks ago are not thriving. I helped J add compost to the containers, then replant them.  He planted more volunteers in the containers that had died.  I weeded the tomatoes in the ground, and put cages around most of them.  The new round of tromboncino squash are coming up.  Let's hope the squash bugs ignore them. 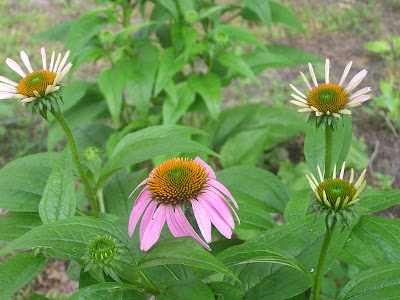 I was asked to be a vendor at a show the local arts guild put on Friday.  I've said I wouldn't do any more outdoor shows, but with lovely weather, with highs in the 70's, I said yes.  People came for the music, and I only made 2 sales.  But it paid for my gas, I was able to catch up with a friend, and got to talk with a favorite Dr. I used to work for.  I was also contacted by the local microbrewery, wanting to know if they could carry my beer soap, which is created with their beer.  I'm pretty excited about that.  I used a $10 promo code and went through swagbucks for 5% back for a small order on Vitacost.  Two loads of laundry were hung on the line.  I picked bouquets for the house.  As I was finishing gathering the flowers, there were 6 bees and hummingbird moths on the flowers in the vase.  I've begun gathering japanese beetles, which the chickens are relishing.  I'm squishing squash bugs and doing a bit of weeding every day.  Since we've had more rain,  I noticed more lambs quarter that needs harvesting. That will be on my to do list next week.  McNibs seems to be doing well, thank goodness. Wishing you a lovely last week of spring!

Glad McNibs is doing well. Love catching up on your latest adventures in homesteading too!

Thanks, Denise! I'm glad that silly boy is doing well too.

Hope all is well with your pup.

You have so much going on all the time. Not sure how you keep track of it all!

The bee balm is blooming in our butterfly bed too. It is a fascinating plant. Love how you use "weeds" to promote health and vitality.

Thanks, Daisy. That silly pup seems to be fine. There are so many plants out there that want to support us.