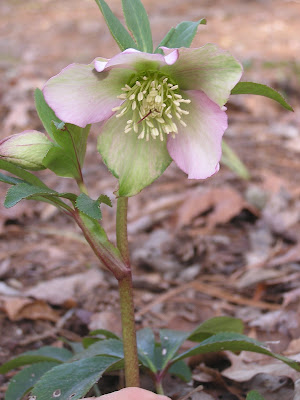 Hello, friends.  We've had a mix of warm and cool days this week.  I was able to hang laundry on the line three days, including sheets which I put right back on the bed.  They smelled so good to crawl into.  I made suet and yogurt.  Ziploc bags were washed for reuse, and fruit and vegi scraps were added to the compost.  A pan of dried, crushed eggs shells was added to the compost bin.  After work, I stopped at Walgreens, and bought sharpie pens BOGO, and got $4 in rewards for buying cashews.  I'd been given a couple of cords I didn't need when I bought the computer monitor at the thrift store last week.  When I dropped them off, I bought a canister to turn into a compost crock at half price. 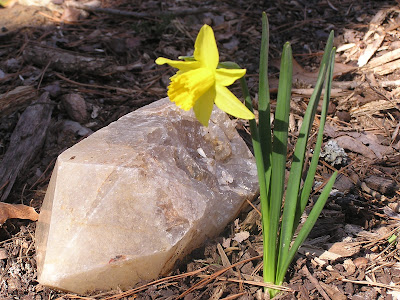 I finished getting my taxes ready Thursday morning.  Yippee!  Every year, I learn something I can do to make it easier, and make notes for future years.  I drilled holes in the canister lid that I'm turning into a compost crock, and painted an order.  It's been unseasonably warm, and I've really been enjoying having windows open, as it's soon to turn cold again.  It's the longest it hasn't rained in a while, so after I vacuumed, I mopped the floors.  In the evening, I met a friend for an inexpensive dinner, then we went to the local quilt guild's meeting, where they had a speaker on basic sewing machine information.  We both picked up a few tips, and met some nice ladies. 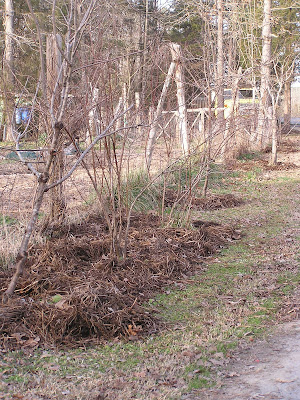 After hanging laundry on the line on Friday, I worked some more on the chop and drop around the fruit trees.  I pruned the kiwis, cut and added their trimmings around two blueberries and several fruit trees along the driveway.  I then covered up the trimmings with some of the bale of spoiled hay.  It was a good workout, but I'm happy to have it done, and hope the trees will reward us with more fruit.  I baked our sweet potatoes for dinner.  The forsythia is making flower buds, and daffodils and one of the hellebores are flowering.

On Saturday, I again worked on the chop and drop.  This time, elderberries were pruned and added around various berries.  A second patch of elderberries was pruned, and trimmings added around several figs.  For a year or so, I've been following a woman in Ireland who has created a beautiful permaculture paradise over 13 years.  She is in her 60's, and does almost all of the work herself, which is encouraging.  I also love the fact that she is only an hour or so from where my grandparents grew up.  If you'd like to view her lovely videos on fb, or visit her, she's at Bealtaine Cottage.  The compost crock and 5 ebay listings were photographed, shipping calculated, and then listed on Sunday.
It's turned colder and begun raining.  Soup and salad seemed in order.  I made a lentil soup, using home canned lentils and our leek and celery.  The celery was from some of the store bought bottoms I planted last year.  They're doing great in the cold frame.  Wishing you a peaceful week, friends.

I read a few back posts and I think I understand the chop and drop now. It looks interesting and I want to learn more about it.

I love seeing how spring has come to your area. We were just feeling like spring was arriving here, and then it snowed! It's been very rainy and wet after the snow melted. Once it stops, I am looking forward to getting back out there in the yard and continuing all my projects I started:)

Your bird and flower pictures are very lovely.

I think we are well on our way to spring. I am watching everything change as I drive to Troy and back.

It got cold and rainy here too, Becky. I'm also looking forward to getting back outside.

You couldn't tell it by this weekend, though, Meredith. But the plants don't seem to mind so much.