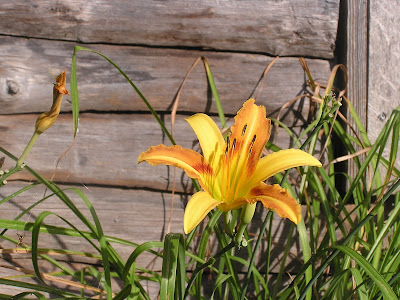 Hello, friends.  A couple of weeks ago, when checking on the wheat, I noticed many of the seed heads missing, somewhere around 25%.  I asked J to look at it, and we determined the local deer population were having themselves a buffet.  The wheat was still too green to harvest, so we bided our time.  By the time it was dry enough to harvest last week, they had eaten at least 75% of the seed heads.  We'll have to figure something out for next year, and try again.  In the meantime, we still need to thresh it by hand.  I'm hoping for seed to replant next year, and flour enough for a pizza or two.  As I believe I've said before, growing your own food is not for the faint of heart!  I'm happy to be joining in with The Prudent Homemaker today.

I discovered one of our broody hens sitting on three eggs, so moved her and the eggs to the broody area.  Later the same day, I found another warm egg to add, and the next day two more, so she is sitting on six eggs.  We'll see how it goes this time around.  J harvested our first tomato, which was just under 2 lbs!  I sliced it up along with some cucumber for dinner.  I harvested cucumbers, yellow squash, blueberries.  J & I put up a trellis for the lima beans.  The fruit on one of our peach trees were turning color, so we were keeping an eye on them.  One day, we noticed that there were about half as many peaches as there had been... pesky squirrels... so we harvested them, though they have a bit of ripening to do yet.  We're thinking there's entirely too much unintended sharing going on around here.  I harvested some apples from our earliest apple tree, and continue to gather the falls.  The first batch of apple cider vinegar smells like it's fermenting, which is the first step in turning to vinegar.  I'd say that's a good sign, and started another jar of vinegar with more of the apples and some honey. 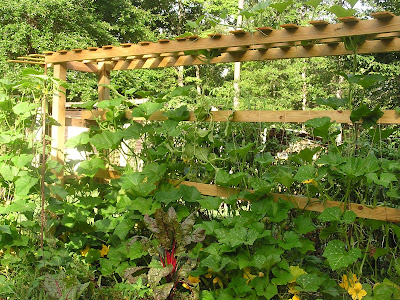 I made kefir and yogurt, hummingbird food, and cobbler using our blueberries and a few blackberries.  One night for dinner, I sauteed our chard and garlic, made asian cucumbers and heated a package of Brandy's black bean burgers.  Another night, I made broccoli fried rice with our eggs, broccoli and garlic, and heated a package of homemade egg rolls from the freezer.  I finished the wardrobe, and put away all my fabric and sewing supplies.  I love all the different shapes and sizes of the drawers, which makes it easy to store many things.  In going through things as I put them away, I pulled a few to donate to the thrift store.  I enjoyed listening to free Pandora as I was working.   J saw yesterday that all the little Carolina wrens were gone from the nest.  We hope they fledged, instead of something getting them. 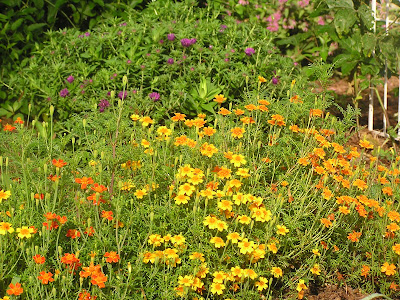 I received 2 free samples of dogfood in the mail, along with a coupon for a free 8-pack.  Though not as natural as what I usually purchase, they will get used. Swagbucks goals were made most days.  Laundry was washed with homemade laundry soap and soap gel, and dried on the line.  Homemade soap was used in the bathroom and shower.  I'd built up a supply of soap end pieces and soap six months old that I'd pulled from store shelves, which I'm letting friends and family choose from to take home.  Most nights were cool enough to open the house up, then close back up in the morning.  Vegi bits were saved in the freezer bag for broth, and other bits composted.  Paper and cardboard was run through the shredder, and a large bag of shredded paper brought home from one of my occasional jobs, to put around several fruit trees. 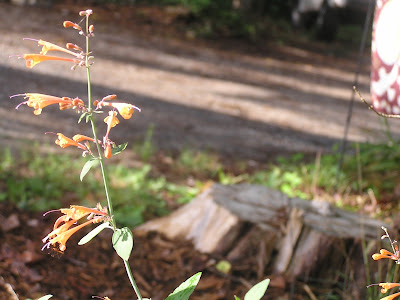 We had house guests the past couple of days.  I cut several bouquets for the house before they arrived.  Due to several different diet restrictions, it was decided to get dinners from a restaurant.  I made a new kale salad for lunch one day, which I served along with cherries, and organic salsa and chips.  To go along with dinner one night, I served asian cucumbers (bet you could have guessed that :o), and made whipped cream to go over homegrown blueberries for dessert.  We picked another tomato.  I enjoyed some on an egg sandwich this morning, and J ate the rest for lunch.  We've eaten a few cherry tomatoes out of hand.  We'll be hosting a 4th of July cook out here.  I'm especially looking forward to the homemade mint ice cream.  Wishing a lovely holiday to all my friends in the states!

I really enjoyed this edition! Is this the first time you're making apple cider vinegar? I love that stuff. I don't suppose you'll be selling it. :-)
Thanks for all you do, my dear.

Hi Deb! I did try making ACV before, with some early fallen apples, but it didn't do well. I believe it may be because there was not enough sugar to ferment, so this time I'm adding some honey in hopes it will take care of that. I will post about the final result.

Obviously word is out that you are the hospitable sort. My granny was always telling me we HAD to pick all the wild blueberries or blackberries because if we didn't the deer or the birds would just eat them. I never understood why she worried over the wild stuff when she had them fenced out of the garden so they couldn't get to the 'good' stuff.

I was wondering how you keep ants from your nectar for the hummingbird? I hung my feeder and the next day it was crawling with the pesky things.

Hi Terri- I had the same problem with ants. I do still have one regular feeder, which so far has not had any ants. It is hung from a very tall pole via 2 shepherds hooks, so it would be quite a trek for them to get to it. But the one feeder I found that works really great is this one: https://www.etsy.com/listing/62317220/bee-proof-drip-free-copper-hummingbird?ga_order=most_relevant&ga_search_type=all&ga_view_type=gallery&ga_search_query=and%20free%20hummingbird%20feeder&ref=sr_gallery_1 It really does work. I've been using mine for two or three years now.