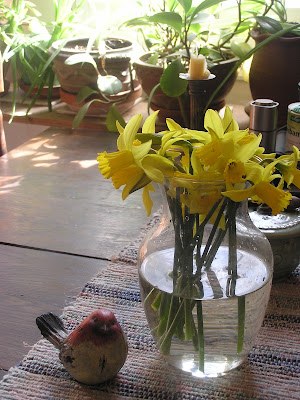 Hello friends.  Last week, I checked on the cabbage and broccoli in the pond garden.  The cabbage are still too small to harvest, but there was one small stalk of broccoli that I was able to harvest.  I borrowed two books and movies from the library.  Laundry was washed with homemade soap and hung on the line.  I used my own bags at the grocery store, getting a .05 credit for each.  I made kefir, yogurt and suet for the birds.  I was invited to a women's Valentines party, and won two prizes at bingo, both candy, with one in a sweet little Pyrex bowl w/ lid.  A woman who was there works in horticulture at one of the local high schools.  She offered me spilanthes plants, which she needed to get rid of to make room for spring planting.  After the party, I picked up a large bucket of plants.  They were blooming, so I will harvest and make tincture with the blooms, then hope to plant them once the weather warms, if I'm able to keep them alive.  They're pretty leggy already, but maybe if I trim them back, it'll help.  I picked chickweed for the chickens on the way to collect eggs most days. 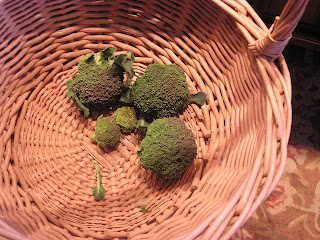 In addition to my work at Hospice, I worked another 3 days at my occasional jobs last week.  While in town, I ran errands.  At Aldi's, I bought organic naval oranges, organic bread and checked out their organic grape tomatoes.  They had no tomato smell, so I passed.  I've learned if it doesn't smell like a tomato, it's not going to taste like one either.  I did purchase some at Lowe's, the first I've bought since last summer, due to our Long keeper tomatoes keeping us stocked.  With temps of 22 forecast, I cut daffodils, afraid they would be harmed.  So, into the house they went to be enjoyed.  While out, I also cut a few branches of forsythia to force.  I've had so-so luck doing this in the past, so we'll see what happens.  We did not need to use wood heat two nights with lows in the mid 50's. 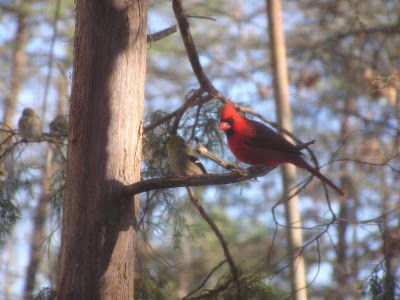 Our butternut squash had been neglected in storage, and some were starting to go bad, so I cut off those spots and cooked them.   The first day, I made soup which was OK, but I don't really care to make it again.  I made crescent rolls to go with the soup, using the last of the home ground wheat.   The next night, there was a squash crumble, which used our parsley, thyme, garlic & oyster mushrooms we grew and dried.  It was more time consuming than I want to spend regularly on a side dish, but very tasty.  We both agreed we'd like it again.  I saved seed from the butternut squash.  I've been collecting green stamps at Lowe's, and the cashier gave me an additional 14 that were not wanted by other customers, which was kind of her.  The promotion ends today, so I need to decide what I'll use them for. 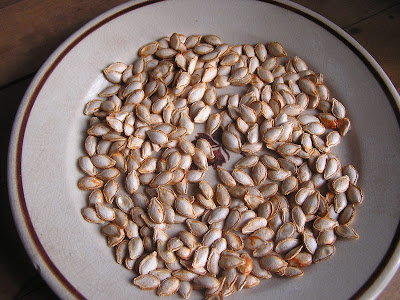 At a thrift store, I purchased a vintage pint canning jar w/ bail .50, two shirts .50 & .75,  piece of muslin .50, never used ribbon .10 ea.  I found organic butter at Harris Teeter BOGO at $5.99, so $3/lb.  It's been $6.49 in our local store for many months, so this was a great deal.  I bought both salted boxes they had, & now wish I'd also bought the two unsalted they had.  The dandelions have begun blooming.  Here are some ideas for using them, if they're blooming where you are too.  I noticed the forsythia branches I cut earlier this week are blooming this morning.  It's a cheerful sight, along with the daffodils.  Our youngest hen laid her first egg.  Isn't it cute as a button? 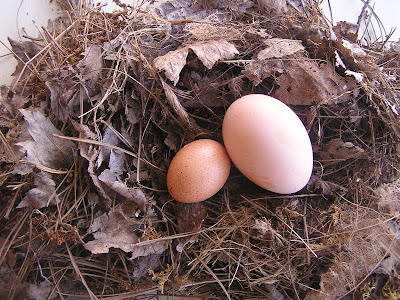 This weekend, I spent more time outside than I have in months.  Besides hanging laundry on the line on Saturday, J & I cleaned up the garden, I dug up, divided and transplanted leeks, and J did the same with Twelve Apostle lilies (we ended up with 35 from 4!).  J tamped down the twigs in the barrel for biochar, and when he was shredding and applying leaves to the garden, I collected several more buckets of twigs.  I'm hoping there are enough twigs to seal the barrel up, and I can begin working on filling the space between inner & outer barrels with larger sticks.  I've been gathering those too, and already have a good sized pile that I need to break up.  In the garden, we removed all the cages, and cleaned up the pole bean debris and burned it.  We also piled up the okra stalks, which we'll burn next. 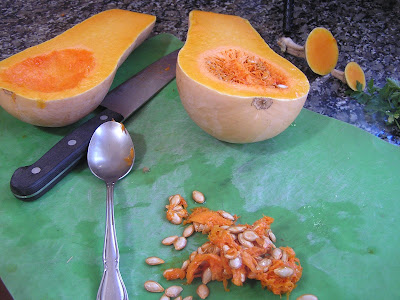 On Sunday, J tamped the biochar sticks down for the last time.  It was filled the remainder of the way, and the lid put on.  Unfortunately, the ring that closes it has gone missing, so we'll have to buy something before we can move on to the next step.  It's been several years since we made the last batch of biochar, and we expect we were overzealous in cleaning up before making a trip to the metal salvage yard one time.  Then, J pruned the European grapes, concord grapes, kiwi and pawpaws while I moved all the prunings to piles.  Five... six... pick up sticks fills like what I've been doing all weekend.  I hope yours was a good one however you spent it.  I'm happy to be joining in with Frugal Accomplishments.

Ok, so now I have springtime envy. You gals that live in NC do this to me every year. Ha! We had snow today so it will be a long time before we have cabbage or broccoli in our garden,maybe around June if we're lucky. Thanks for the link to the squash crumble. Looks delicious. Have a wonderful and spring-like week!

I agree with strawberries too, Michele. Our weather has been up and down, Jane. I'm just hoping the cool temps stay with us a bit longer, so the fruit trees are not tricked into blooming too early. The peaches look like they are not too far from it. Last year, we lost almost all our fruit to frost, & I'd surely love to get some this year.

Years ago like in 2008 when the economy tanked, I couldn't find work I would pick up sticks all day long wrap them in bundles and list them as kindling on craigslist to earn extra money. It was not much but it paid little bills for awhile.

I like that, Robert. Creativity is a good thing.