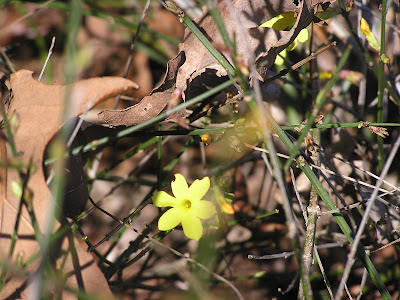 Hello, friends.  I so enjoy when I'm able to prepare a meal from mostly homegrown items, which I was able to do last week, using our potatoes in colcannon, these green beans,  and our canned carrots with butter and honey.  The potatoes had begun sprouting, so I cut the areas around the eyes off for planting next month.  We already have seed potatoes, but are saving the eyes to add to those. You can't have enough potatoes, I'm thinking, and it will soon be time to plant them.  Laundry was done with homemade soap.  Several loads were hung on the line, and another dried in the dryer due to the chance of rain that evening. Dryer lint was put in toilet paper tubes for fire starters, and a little candle wax dripped at the ends.  I pondered as I did this that a lot of folks may find it over the top in terms of frugalness, but to me it's just a part of being grateful for everything and trying to waste as little as possible.  Making something to cut down on the struggle when trying to warm the house and the fire is being uncooperative, and keeping a few more things out of the landfill makes sense to me.  I wonder if any of you that heat with wood do this, or if you feel it's extreme frugalness?  It won't change what I do, and I already know I'm a bit odd :o).  I'm just curious. 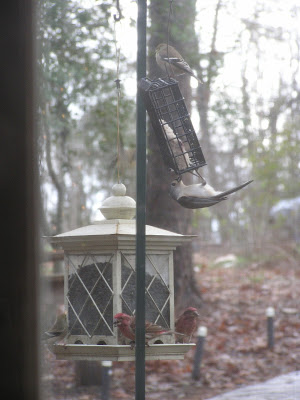 A good portion of a day was spent cleaning, researching, taking photos of and listing 4 (antique/vintage) items on ebay.  I found all the boxes to calculate shipping in my reuse pile, as well as packing materials.  Three of the items were lead crystal, and in cleaning them I realized all had chips.  It can get discouraging, but they were all still lovely pieces, so I'm hoping for the best.  I enjoyed listening to music on Pandora while cooking and working around the house.  Each evening, I took an Italian lesson through Duolingo.  I found a quarter in a parking lot.  Ever since my folks passed, I keep all my "pennies from heaven" together.  It's very nice to find quarters too.  Some day I'll figure out something special to do with my heavenly bounty. 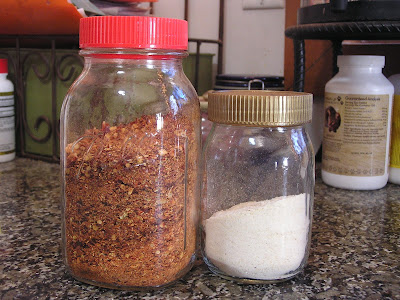 I froze leftover black bean burgers, enough for two dinners, and froze Spanish rice.  A half dozen eggs were boiled.  I weeded around one of the pear trees, where bermuda grass had taken hold.  I know it will come back until I can get all the pieces out, but it's a start.  I walked with the pups for exercise most evenings.  Now that I've got another coffee grinder, I relegated the one that's been held together with electrical tape to be the garlic & hot pepper grinder.  Remembering how pungent the hot peppers were when they were dehydrating, I decided to do that task outdoors, which really wasn't necessary.  I think most if not all of the essential oils dissipate when they're drying, so there was only a slight pepper scent in the air.  It was a little messy, with that broken grinder lid allowing some powder to escape, so I'm still glad I did it outside.  I'm happy to have that task finished.  We have enough garlic powder and red pepper flakes to last us a while. 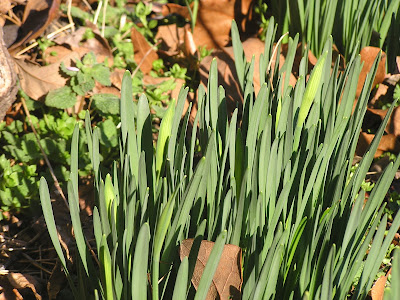 I've been working on getting some things relisted in my shop, some variations of things that needed photos taken and a new description written.  I baked our sweet potatoes, and prepared our collards with rice to go with it.  Tiny sweet potatoes were boiled for the pups.  I'm not sure why, but there has been more waste with the sweet potatoes this year.  I found quite a few that had shriveled up, which I had to compost.  We stored them exactly the same way last year, and I still had sweet potatoes in perfect shape from the year before when we dug these in October.  That's a reality about growing and preserving food. There are going to be variations from year to year.  It's not for the faint-hearted, I tell you.  The scotch broom has begun blooming, and there are flower buds on the daffodils and a hellebore. 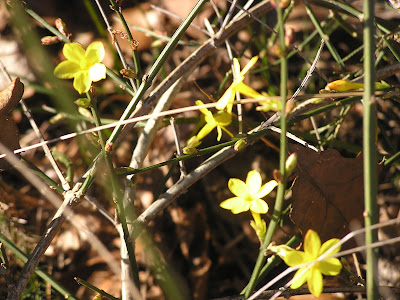 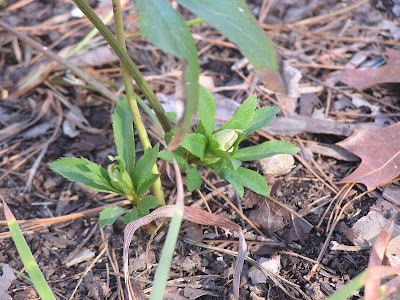 I read about a cranberry pomegranate compote, and having both fruits that needed using, I made it and we enjoyed it over yogurt.  I had also bought fresh currants recently, as I'd never tasted any but dried.  After using some in a salad, which was just OK, I decided to make another compote adding the remaining currants in.  We enjoyed both versions.  The recipe is in the book Yogurt Culture, which I was able to google and access online.  The guys have a wood fired boiler for their shop heat.  It smokes a bit when they crank it up first thing.  When I looked out, I thought the combination of the woodsmoke and sunrise was pretty. 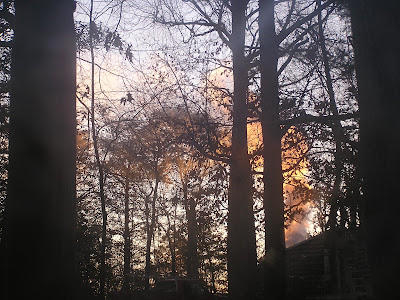 I ran into a thrift shop under new management while running other errands.  Thankfully it was much cleaner and nicer than the last time I was in, and I purchased a sweet handpainted tray I plan to use when I next need to do a soap photo shoot.  I decided to go ahead and start the usnea tincture, and just add to it if I should find any more.  I'd read it's best to use fresh, and it had already been sitting a few days, so that seemed the best choice.  I figure even a small amount of usnea tincture is better than none at all. 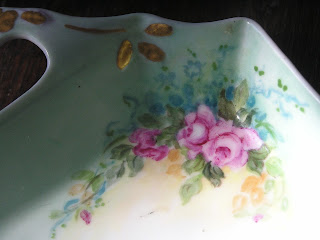 J has an elderly aunt that is fading, so we spent 6 hours on the road yesterday to visit with her. I brought clementines and water, but we were hoping for a hot meal while there.  The restaurant we hoped to eat at was not open for lunch, so we went into a grocery store and bought hummus and chips, and some cheese curds which I'd heard about but had never tried.  Lots of J's family came by while we were there, so it was a bit of a reunion.  It always surprises me how tiring a day traveling can be. and I'm moving rather slowly today.  It looks like several of my ebay items will sell today, so I've been getting them packed up well, as they're all breakable.  I've got plans to make Brandy's chard soup tonight, and maybe some crescent rolls.  Then I hope to get a bit of time to relax.  I hope your weekend has been a good one.

An especially lovely report. I appreciated the reminder about the usnea, too. Do you know if there are any other plants in our area that resemble it? I am thinking not, but wouldn't want to inadvertently ingest the wrong tinture. I'm going to start looking for and gathering it. I've certainly seen it on my nature wanders!

I don't have a dryer, Laurie, but you know if I did, I would most certainly use the lint to make fire starters. Too frugal? Is there such a thing? Ha! It's starting to look like Spring at your home! Hope you have a wonderful thrifty week!

Deb, I've wondered the same, and hope to talk with Henrietta. I do know there is a moss or lichen that seems pretty similar to me, but it's neater rather than scraggly like usnea typically is, if that makes sense. I expect you do see it in your woods wanderings. And what I'm talking about is on limbs that are on the ground, which is where I've been collecting it. I expect it's more obvious in hanging limbs.

Jane, I knew we were kindred spirits when I first found you :o)! I mostly use the clothesline, but am thankful to have the option, and by golly, I'm going to use that lint!

Had a fire tonight that was helped started with toilet paper tubes stuffed with lint! Have never put wax on them though. We take them with us when we go camping to help start the campfire too!

Thanks for stopping by & for commenting, Holley! I don't always put candle wax on them, but if I happen to have a candle burning, I usually drip a little on the ends.

If I had known about making fire starters when we were living in the log cabin, I definitely would have made some. I often struggled with getting the fire going, often resorting to using a torch!
I noticed some sort of wild, thorny, bush was blooming next to my clothesline last week, and my chives have started to come up in the garden. Fingers crossed for an early spring.

Maybe you can tuck the fire starter info away, in case you ever have need in the future, Michele. It is hopeful to see things coming alive again, isn't it?