Hello, friends.  Last week, I made a vegetarian version of my grandmother's stuffing, which included our egg and parsley, and prepared our fresh lima beans I had frozen in the summer, along with roasted brussels sprouts.  I do love brussels sprouts, as well as my grandmother's stuffing.  I guess technically it should be called dressing, as I didn't stuff anything with it.  I did laundry with homemade laundry soap & soap gel.  Before the first hard frost, I had cut stems of okra left to grow large for decorating.  I added some of those to the door wreath, after noticing at the historic Bryant House, they used okra and cotton in their holiday decorating.  I've always wanted to try growing cotton.  Maybe 2017 will be the year.  I treated the chickens to some leftover Chinese food J hadn't quite finished, and the grapefruit halves that I had for breakfast.  They don't care for oranges, but pick the grapefruit innards clean.

While in town after work, I shopped at Walgreens, & got several good deals.  It was their 20% off senior day (savings over $7), I used a promo code for 1/2 off a photo print,  replaced a set of twinkly lights which had died this past week with a BOGO free offer, and received $5 to use towards a future purchase. At the grocery store, I found baby bella mushrooms on sale, a bottle of a favorite wine on sale for less than 1/2 price, & used a $4 coupon for dogfood.  I've been working again on my quilt, sewing in the loose threads, & began writing my holiday cards.  I'm joining in with Frugal Accomplishments today.

Due to illness, I got some more hours at my occasional job this week, then ran a few more errands.  I borrowed books from the library, picked up stocking items & presents for the pups at Big Lots & Marshalls,  chicken treats (mealworms with oregano) at Southern States, 4 tank tops that I'll wear as camisoles for .49 ea. at the Salvation Army, a white top I will add to the things I plan to dye & another top for $1.99 ea.  Our tomatoes, garlic and herbs went in to a pasta sauce.  Yogurt & kefir were made.  With the coldest temps so far coming, I harvested lettuce, collards, kale & swiss chard, then covered up what I could.  Sweet potatoes were baked, & collards and rice served along side, which also uses homemade broth. 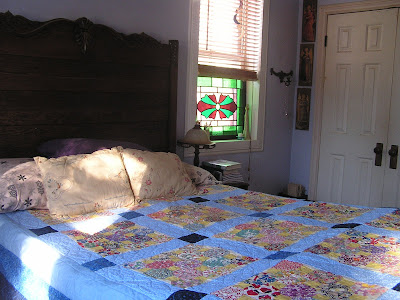 Both J & I woke up feeling badly one night.  Feeling some better by morning, but still a bit under the weather, I took the day at a slower pace.  I didn't feel up to vacuuming the house, but instead swept the floors.  I read a bit of A Traveller in Time, which was shared by this kindred spirit, & managed to finally finish my quilt, good timing to keep us warm these cold nights.  I ventured out to gather eggs, walk to the mailbox, & bring the chickens some of their mealworm treat. The treat was intended to be a Christmas present, but as it had gotten down to 19 with possibly colder temps coming, I decided they could use a few extra calories.  As I dole them out a handful or two at a time, there should still be some left for Christmas.  Ha... do any of you get your chickens a Christmas present?  A small pumpkin bought for decoration for the hayride was given to the chickens another day. 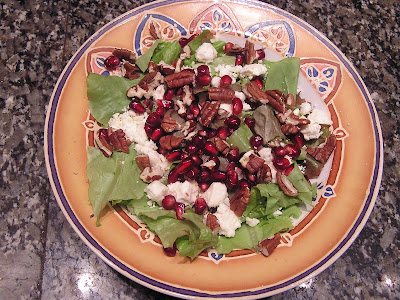 A current favorite salad is our lettuce with pomegranate seeds, feta cheese & toasted pecans, dressed with a vinaigrette made using our berry syrup.  With this, I cooked artichokes bought on sale, & had one along with our boiled potatoes.  J prepared our turnips, & also had those.  One night, J & I took turns reading aloud a Christmas story shared here.  We've had intentions of passing long winter nights doing this for several winters, but as our choice of reading material doesn't often converge, this is the first time we've done it.  I opened a bottle of port, which we'd both found out we liked on Thanksgiving.  Sitting near the woodstove, reading & enjoying a little port made for an enjoyable time.  Holiday baking has begun.  So far, I've made sesame & peanut butter cookies.  I colored my hair at home, & used homemade soap.  Water tumblers were emptied into the humidifier on the woodstove. 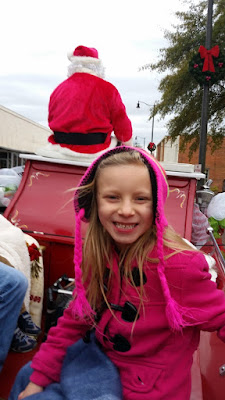 J & I enjoyed some local Christmas events with our granddaughter.  First, we visited 3 historic house-museums (all on the same site) that were decorated for the holidays.  There was cider & cookies, a woman playing dulcimer, one spinning wool, & another doing silhouettes.  I wasn't quite sure if a 6 yr. old would enjoy these things, but she readily sat for a silhouette, enjoyed the refreshments, & told me (unprompted) that she really enjoyed seeing "those old houses".  The houses are open free of charge, with boxes for donations.  We hedged our bets and planned something afterwards that we were pretty sure would please, a carriage ride with Santa, & as you can see, it was a hit.  The day wasn't especially frugal, but hopefully it created memories, which is worth much more than a toy that will soon be forgotten.  Wishing you a week of good cheer!

We've been eating pomegranates on our salad too. Never thought to add feta cheese, but it seems like it would be a tasty combination. Thanks for the idea! That's a sweet quilt. I'm sure the happy memories you made with your granddaughter are far better than the pennies in the bank. Sometimes you just have to spend money. :) Have a lovely evening!

Thanks, Jane! I picked up the quilt blocks at a thrift shop, & love all the old fabrics. I bet there are some wonderful stories that go with them.

Congratulations on the guilt, it's lovely.
It looks like a grand day out with the granddaughter.

Ha! Always plenty of guilt to go around too, Meredith! And it was a good day.

Dear Laurie,
I am a new reader to your blog after learning of it from Jane's blog, Hope and Thrift. I'm enjoying your archives and just wanted to say that is such a pretty quilt! You did beautiful work and the colors are nice and bright. It made me smile.
Sincerely,
Dana

Welcome Dana! I'm a big fan of Jane's blog too. Thanks so much for your kind comments.

I enjoyed seeing a full picture of your quilt. You did a great job saving and restoring something discarded. It was also interesting reading your old posts, being welcomed into strangers' houses, a carriage ride with other children. We live in another world now post-Covid, I miss the freedoms we have lost.
Thanks for sharing.
Jeannie@GetMeToTheCountry