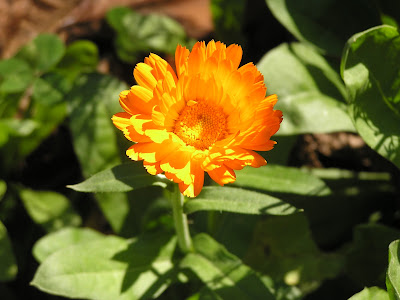 Last week, I cut up one of the watermelons & gave it to the chickens.  Though it was pink, it hadn't ripened enough to have much flavor.  They loved it though.  I picked chickweed & greens and gave them those other days.  Laundry was done with homemade laundry soap and hung on the line.  The pups were given some of our dehydrated sweet potatoes for treats.  I decided to try picking one more round of lima beans, even though we've had frost.  There were a couple of cups once I was done shelling them, and I cooked them up for our dinner as I didn't think they'd keep well.  With them, I cooked our okra in the wok, & made cornbread.  Though we didn't grow the corn or wheat, I ground them both, and used our eggs.  A mostly homegrown meal is always good, and it was delicious. 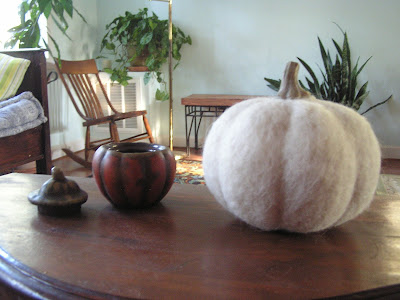 The first pumpkin pie of the season was made.  A dear friend gifted me the felted pumpkin when we met for lunch recently.  I went by Aldi's last week, & they did seem to have more groceries, though the organic produce section was pretty disappointing.  I recently read where the company is moving to carry more natural and organic items, but they only had tomatoes, bananas, Gala apples & avocados.  I'm hoping it will expand.  I did pick up .99 pomegranates while there.  After working in town, I knew I'd be passing by one of the shoebox drop off sites, so took advantage and dropped mine off.  I requested books from the library, & picked them up while there.  I tasted the fermented cranberry relish started last week.  Though I expect it does have some good probiotics, I doubt I'll be making that again.  The fresh version is much nicer to my palate. 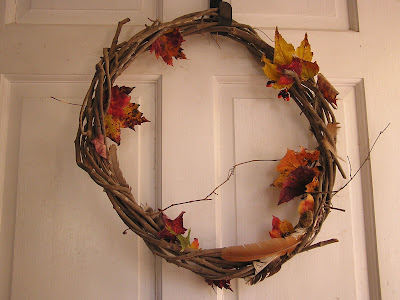 I had just the right amount from the final picking of eggplant to make Pasta Norma, which also used several of our tomatoes and herbs.  Our lettuce and tomatoes went into a salad to go along with it.  I made yogurt, kefir & kombucha.  The grocery store was out of gallons of our whole milk this week, so I got 1/2 gal. of the store brand.  There wasn't enough left to make yogurt, so I made a batch with dried milk.  The pups don't seem to mind a bit.  The chickens were given some cut up scoby.  I worked the local pottery festival 2 days, & brought food and water.  There was hot water available for workers, and I brought tea and a mug.  I enjoyed a free cup of beer from a local microbrewery at the Gala on Friday.  When I got home on Saturday, I was ready for a warm, comforting meal, and made colcannon with our potatoes, and beans from our pantry. 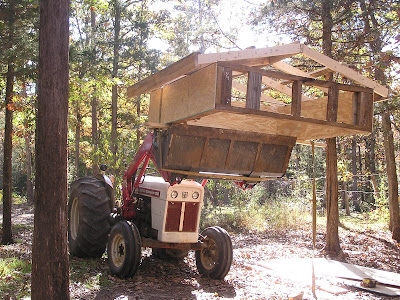 Here's a peek at a recent project the guys have been working on.  Once it's done, I'll tell you more about it.  We're headed out today. First, to a gathering & closing ceremony for my massage alma mater, then to dinner & a concert in Raleigh.  It's going to be a cold one.  Stay warm, friends!  I'm joining with Frugal Accomplishments.

I'm intrigued by your new project. You always are doing such healthy things. I'm hoping by reading your blog I'll be motivated to become healthier. Happy Thanksgiving!

You're very sweet, Jane! I'm blessed to be healthy... good thing with no insurance. I hope you have a lovely Thanksgiving too!