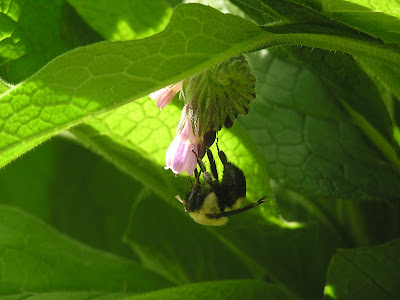 On Tuesday evening,  our first chick hatched!  It's been a number of years since any chicks hatched here, and I'm not sure I'd ever seen one only partially hatched before.  I was surprised how much noise it was making already at that point.  I had already made up a batch of chick food. I based it on the instructions in Carla Emery's Encyclopedia of Country Living, a book that is unmatched for the amount of information contained on homestead living.  Here's what I used: 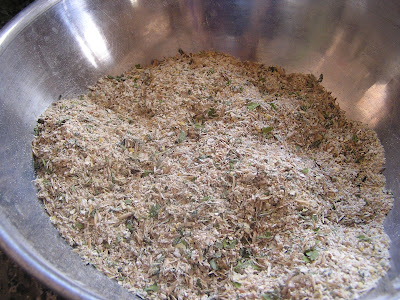 I ground the grains and crushed the herbs, picking out stem pieces, added the remaining ingredients and mixed it up.  I like knowing the grains are not genetically modified, and that several of the ingredients came from here.  I'll bring them bugs as I find them, and probably decrease the dried herbs as I bring them fresh.  I made soup using our leeks and vegi broth.  Leek and mushroom bits went in the broth bag.  The recipe called for quick-cooking brown rice, which I don't buy, so I used quinoa instead, which worked fine. 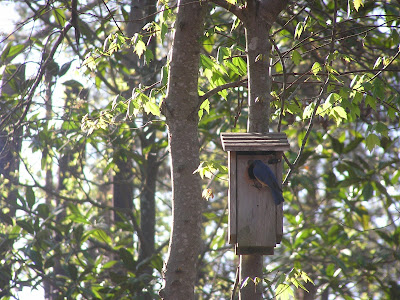 Though I'd intended to wait until we stopped heating with wood for the season, I began a bit of spring cleaning.  I worked on the kitchen island, which tends to collect papers...  my to-do lists, coupons, and other generally useful information.   All the bed linens were washed, including pad and pillow covers, dried on the line, and put back on the bed.  I put up the hummingbird feeder last week, and they showed up this week.  The bluebirds have little ones, and can be seen bringing food to them.    I also saw a tufted titmouse go into one of the bird houses at the edge of the garden.  I attended a wonderful annual plant sale with a friend, sponsored by the NC Herb Society.  The prices were reasonable, and there will be additions to food, medicine and beauty here.  I shared a sprig of Kentucky Colonel mint with a worker who was here and expressed excitement about his plans to begin growing herbs this year. He'd been talking with one of the vendors at the farmer's market, and was planning to buy herbs from her.  I pondered giving him several other herbs, but didn't want to diminish the sales of the woman at the farmers market.  I made sure to give him a warning about mint, and he said he had just the place for it. 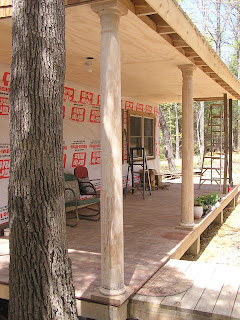 I continue to work on stripping the porch posts.  I'd been pondering why it was taking so long, & realized being they're round, I can only do 1/4 at a time, and each section takes 3 or 4 times to get all the paint off, so a total of 12-16 goes to do each post.  It's my first time stripping paint, and I'm using a citrus based stripper, both of which probably also slow me down.  I cut a bouquet of lilacs for the house.  Entered info for Purina cat chow points, which should eventually get me a free bag.  Combined a coupon with a sale for the pup's food, for $5 off.  The sale goes on another couple of weeks, so I will get another bag with a coupon next week.  Picked up some things at the discount grocery, including kalamata olives for $2, organic cereal $2, organic cannelini beans .50, artichoke hearts .50, dried blueberries and tart cherries for $1/bag, Bobs Red Mill flaked coconut for $2, boxed whole milk for $1 (good til November).  Though I prefer buying local milk, I like to keep some of these on hand to save a trip to the grocery store & for bad weather. I also bought 20# bags of black oil sunflower seeds for $5 ea. for the birds, & 7# Iams cat food for $7.  The bags were all taped, but appeared full or near full.

I finished weeding the original herb bed.  J dug up leeks that were in it, and we both pulled wild onions from it.  I cleaned the wild onions and added them to the broth bag.  I ground a pan of dry bread for bread crumbs, and froze it.  The chick is 3 days old as I type this, and mama hen is still sitting on the other 4 eggs, but no sign yet if they are viable.  J & I regularly check mama and chick.  The chick appears healthy, but I noticed mama shivering, so made up a batch of oats, warm milk, nettles, kelp, yogurt, kefir and bread.  Boy, did she love that!  She stopped shivering right after eating.  I figured she has probably not taken in enough calories lately to stay warm, so this warm & nutritious meal helped. I put a bit more in there in the late afternoon, and we added a heat lamp.  On Saturday, we found one of the eggs outside the nest box.  We can only assume mama hen put it out on purpose.  So, that leaves 3.  The chick is active, & eating and drinking well.  I made up another batch of nourishing oats, which they both ate.

J & I spent most of Saturday in our crawl space.  First, we covered the entire crawl space in plastic, which will make it a bit nicer to work there, as well as decrease the humidity.  Then we began on the duct work for the new room.  J made the return air plenum from steel that was recycled from the original solar hot water heater on the roof, which was second hand and never worked all that well.  I'm happy we could use the steel for this project.  I cooked garbanzo beans using our onions.  Pulled various "weeds" for the chickens.  I'm making a new leek soup as I finish up this post, which also uses our garlic, broth & oregano, along with carrots, red pepper flakes & paprika.  I'm making a quiche with our eggs, garlic, sweet red pepper & parsley to go along with it, and a pear & blue cheese salad with homemade vinaigrette.  Soup has been a help in getting my weight down, and I have some most days.  It's filling, nutritious and tasty.  Our second chick hatched this afternoon!  What have you been cooking or planting recently?  I'm joining in with Frugal Accomplishments today.

New baby chicks.. how exciting is that?!!
Iam's cat food for $7, that's awesome. That is what I feed my Sophie cat. I really need to get to the discount store more often.

We are finally seeing some hummingbirds, and so far the ants are staying away from the feeder.

It is fun having chicks. I have to check on them several times a day :o). The discount store is always an adventure. You never know what you'll find there.

I love the Encyclopedia of Country Living. I've had it for over 30 years and have referred to it countless times over the years.

Me too, Becky! I appreciate you stopping by and taking the time to comment.