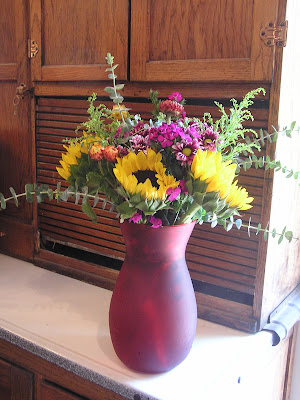 Hello, friends.  I was gifted these lovely flowers for my birthday last week.  With several sprigs of eucalyptus, they smell as good as they look.  I'm happy to be joining in with Frugal Accomplishments today.  I shopped at the discount grocery store.  Favorite finds were 1 lb organic raw cacoa powder for $3  ($18.90 on Amazon) & 1 lb. organic ground cinnamon for $4 (normally $18).  Harvested cucumbers, tromboncino squash, tomatoes, eggplant, basil, oregano, chives, pawpaws, okra.  Canned tomato juice and tomatoes.  Gave the chickens holey chard leaves and tomatoes, and wild grapes I collect on my walks.  The pups got chopped tomatoes, basil, boiled eggs and grated cucumbers with meals.  Something was chewing on the last 2 winter squash in the garden, so I harvested them, cut out those parts, put the squash in the fridge and added the skins to the broth bag in the freezer.  I saved the seed, and gave the chickens the other inner bits.

We open the windows up when the nights are cool, and close them in the mornings.  I made a pasta dish using our eggplant, tomatoes, garlic and herbs.  Added the eggplant ends to the stock bag in the freezer.  Brought a friend to a procedure, and took water and snacks for the day, along with a library book.  I harvested a few hazelnuts, but the wasps had a new nest in the bush, and stung me once in the process.  This has been a very bad wasp year here.  J took care of the wasps, and I harvested a few more hazelnuts another day.  We have many native hickories on this land, and the nuts are falling.  I've been gathering a few here and there, when I walk to the mailbox.  They're a very tasty nut, though a bit of work.  I was happy to fill my car with $1.99/gal. gas this week. 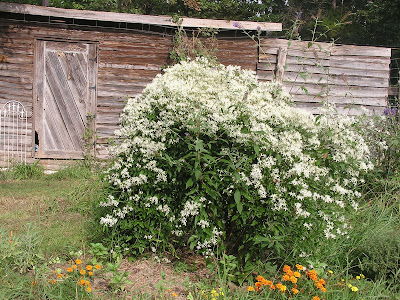 I purchased marked down seeds of green beans, peas and lettuce, as well as bagged manure, organic fertilizer, bean inoculant and potting soil.  I bought Glide floss on sale at Walgreens, and got reward points for the purchase.  Made yogurt and kefir.   I colored my hair at home.  Frugal fail: I found several cucumbers in the crisper that were no longer edible, and composted them.  We grew 3 types of cucumbers this year.  Two types died fairly quickly (Armenian & Muncher), but the asian cucumbers Suyo Long just keep bearing.  Every year is different in the garden, but I'm impressed with them, especially since the second round of cucumbers never germinated.  J ordered more of these seeds, and a few more that we needed this week, as well as garlic to plant this fall.  When I began canning tomatoes on Sunday, I found a praying mantis in among them, and put him outside after I snapped this somewhat blurry photo.  The cooled canning water went on plants.

I found a copy of Radical Homemakers on half.com for very little, which I've been wanting to read for a while.  I'm enjoying it so far.  I purchased windows at our local home improvement store.   J & I had tried several Habitat Restores, a discount store, and the Pella store first.  The Pella store had what we needed, but at quite a bit more than I wanted to spend.  I had hoped they still had returned windows, display models, etc. at discount, but they no longer do.  The home improvement store had Pella windows on sale for 15% off this week, and putting it on my card, which I'll pay off when I receive the bill, saved another 5%, which ended up making the windows about 30% the price wanted at the Pella store.  They were not the same windows, and probably a bit lesser quality, but for 70% off, I can live with it.  I did have to go to the customer service desk, as 15% was not taken off the price at checkout as promised.  The manager got a bit snippy, saying she'd only give me 10%, but the original woman who helped me was rather insistent that she give me the 15% as advertised.   The window purchase may not be frugal, but I got the best deal for what I wanted.  May you accomplish everything you hope for this week!

We have been haunting restores for windows and doors too. We need three more for the carport/gallery and the restores haven't had any. I think we may end up having to purchase new ones.
When we were rehabbing our kitchen we had to order some things at the local home improvement store, along with the items we took home that day. I had a 10% off coupon but the cashier rang up the items we ordered separately... then told us we could only use the 10% off on one of the tickets. She and the manager were a little irritated when I said cancel the sale and ring them up together because I had planned on getting the 10% off of everything. It took awhile, but like you, I finally got what I wanted!

Hmmm, starting to sound like a trend there, Michele. Just got to keep them honest!