A Bountiful Garden and Frugal Accomplishments

I thought I'd share some photos today from our recent trip to Abingdon, VA, along with joining in with Frugal Accomplishments.  Last week, I harvested and canned tomatoes, and dehydrated zucchini and tromboncino squash. Made kefir and yogurt.  Harvested beets, sliced and canned them.  Gave the pups grated zucchini and cucumber with their dinner most nights.  I trimmed one of the basil plants, where it is encroaching on an eggplant, and scattered the trimmings in the chicken coop.  I was recently reminded of the natural antibacterial properties of most herbs, which seems a good way to bolster the chickens immune systems against avian flu and other illness.  It has the added benefit of smelling nicer in the coop. 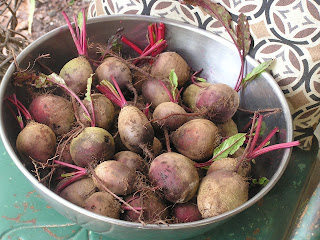 Borrowed and read A Nickels Worth of Skim Milk, a Depression era book.  I made a purchase on Amazon, and remembered to go through Brandy's link at The Prudent Homemaker, so she will benefit a little from my purchase.   Did laundry using homemade laundry soap and soap gel, and hung all loads on the line to dry.  I took advantage of 35% off homesteading books at Chelsea Green, and bought J a present for the holidays.

I recently broke the bubble remover stick that came with my canning tools years ago.  I searched online, but didn't find anything less than $7.99, which irked me for a simple plastic stick.  I asked for suggestions on The Prudent Homemaker, and a butter knife and chopstick were suggested.  I had thought of a butter knife, but am pretty sure I've read that wasn't recommended, as it could scratch the jars and compromise their integrity.  However, a chopstick is right up my alley, and I already had several to choose from.  A great idea, and a plastic tool replaced by a wooden one makes me happy.

One evening on a walk with the pups, I heard the sound of a couple of birds shrieking in our woods.  It was quite an odd sound.  My research makes me think they were juvenile great horned owls.  I harvested basil, oregano and parsley.  The pups got the imperfect parsley with their dinner, and I made pasta sauce with the herbs, tomatoes and garlic from the garden.  I trimmed back more of the basil and oregano to encourage growth, leaving plenty for the bees, who were busy as I trimmed.  The trimmings went on the chicken coop floor. 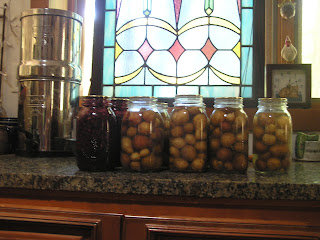 I canned 2 qts of blueberries.  They are fading, with fewer and smaller berries, so I will leave the rest for the birds.  I dug the remainder of the potatoes.  There were slightly more than 12#.  Less than we'd hoped for, but I'm grateful for what we did get.  I separated out the smallest of these, and canned them.  I've never eaten canned potatoes, but with all the little ones, it seemed like a good idea.  I've kept the dehydrator going all week with summer squash. The big bat of a zucchini I found when we got home from vacation has been grated and frozen.

Cut a bouquet of zinnias and tansy for the house.  I brought a bowl of cherry tomatoes, asian cucumbers and tomato pie to a family gathering, and shared our bounty of cucumbers, squash and eggs with family members.  I found several good deals at Big Lots, including qts. of apple cider vinegar for $1 (I had not found anything less than $7/gal. until these), organic sugar $4 for 3#, very tasty olives for $2/ jar, and natural whole grain oat cereal which J likes for $1.  I harvested a large amount of elderberries, and started a jar of tincture with them.  I think we should be set for tincture for a while, so I will make jam and possibly syrup with any upcoming elderberry harvests.  We harvested our first corn, and had it for dinner.  It was delicious!  Have an enjoyable week, friends!

I always feel like I am right there with you as you can and harvest and do this and that!

I love the thought of that, April! And I suppose you are, when you are in my thoughts.

You inspire me to have a great garden next year! I may be calling you for canning advice :-)