I'm joining in with The Prudent Homemaker's Frugal Accomplishments today.  Last week, I made blueberry jam, and dehydrated the pulp for bird suet.  I froze several bags of tromboncino squash. With freezer space at a premium, I needed to make some room.  In addition to taking out spaghetti sauce, which I added to a pasta dish , I removed 3 bags of vegi trimmings, and canned a gallon of broth.  The pasta dish used our tomatoes, tromboncino squash, basil, rosemary and onion.  I grated and froze several bags of zucchini, and removed one bag from last year to make zucchini bread.  I had cornmeal  I had already ground, and did not have any wheat ground, so I substituted the cornmeal for the ww flour portion of the zucchini bread.  On occasion, I find the prettiest designs in squash.  I find beauty is all around me, if I take the time to look.

I listed several things on ebay.  Shared cucumbers with neighbors, and with men that were working here.  I made fresh mint ice cream using our mint and eggs.  So good!  The pups got boiled eggs, chopped basil, grated cucumber and cabbage core, a tomato a worm got into, and tromboncino added to their dinner on various nights.  Used homemade soap and deodorant, and did hand washing with homemade soap gel.  I saved canning water and watered plants with it.  Hand picked Japanese beetles and fed them to the chickens.

Harvested blueberries, a few raspberries, zucchini & tromboncino squash, tomatoes, cucumbers, basil, & rosemary.  Made asian cucumbers.   I placed a bowl of cherry tomatoes on the table, and we snack on them through the day.  The zinnias I planted last weekend were jumping up, which inspired me to plant the rest of the packet.  I'm hoping for lots of late summer cheerful colors.  I made yogurt and kefir, harvested and dehydrated carrots.

I was early to meet my sister, and went by Salvation Army.  I found a cast iron woodstove humidifier.  The cheapest one I saw online was $30 for a used one, and I got this one for $2.50.  Yay!  It was perfect timing, as the Japanese cast iron teapot I had been using on the woodstove for the last 10 years pretty much disintegrated this spring. 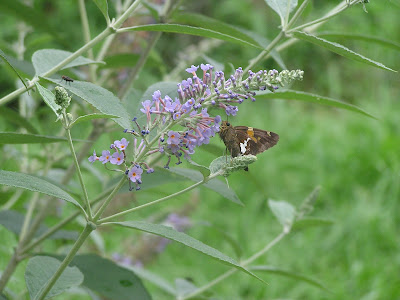 I sometimes shop sit for one of the potteries, and they have blueberries that they offered to me to pick.  In between customers,  I picked a quart.  J & M have been asking for blueberry ice cream.  I must admit, I wasn't so sure about that one.  I found a recipe to make, which used one quart of blueberries.  This is the recipe I used.  It was good.

Passing by, I noticed caterpillars on the milkweed. With some research, I learned they are milkweed tussock moths.   Shared more cucumbers and squash with a neighbor.  Harvested elderberries and added them to a tincture jar that was already brewing.  Goodness, can July be almost over?  I hope yours has been a good one.
Posted by Laurie at 7:21 AM

Isn't it stunning where beauty hides. The squash is truly gorgeous inside! Reminds me of how I once cut away the coarse leaves of a cauliflower only to find pale delicately veined leaves nestled in the head. It was so beautiful...

"I find beauty is all around me, if I take the time to look."

Thank you for your visits and comments, kindred spirits!