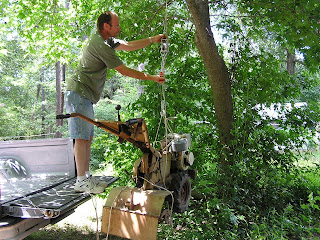 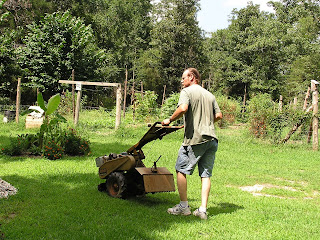 Ever since seeing Heather's recipe for lavender lemonade, I've wanted to make it. This week, I finally did, and it's the loveliest summer beverage. Since then, she's posted a recipe for lavender vanilla cupcakes. Even if the recipe is not something you think you'll try, check out those lovely thrifted dishes. Speaking of thrifted treasures, check out this portrait found at a Goodwill. I do so love a good thrifted treasure.
Joseph found a treasure this week, in an old, but strong and sturdy tiller. The man selling it told him it had transmission problems, but he's looked it over, and it only needs a couple of belts and a bearing to get it operational. I've not been fond of using a tiller in the garden, but our organic market gardener friends tell us it doesn't harm the earthworms or the soil structure. We definitely need to do something. About this time last year, we began putting down cardboard in the paths between the raised beds. As so much of gardening is, it was an experiment in seeing what works. On the plus side, it held the moisture in really well, and supported a multitude of earthworms. On the down side, the nightime critters discovered the worm buffet, and tore through the cardboard getting to them, making a huge mess. Worst of all, this allowed the grass and weeds to take hold again. The bermuda grass probably didn't need the help, as it happily ran for yards underneath the cardboard, until it found a spot to poke back up. So, we'll be tilling the paths up, to get rid of grass, weeds and the dreaded bermuda grass. Next, we're going to try using the cardboard on the beds, and planting through it, for moisture, and weed control. Wish us luck!
Posted by Laurie at 12:31 PM

Labels: using cardboard in the garden

we are like the grass, we are always looking for the best path- moving along and finding out what works.
BTW- we had a dinner that had some good okra,cucunbers, purple beans and a really tasty tomato......thanks for sharing!

I made that lemonade too! I love Heather's blog :) Have a happy day.

I hope the tiller does the job for you. I didn't know that animals knew there would be worms under the cardboard.
The lavender cupcakes and vanilla sound so good. I've got lots of lavender growing.
My Calendula from you is blooming. I had given up on most of my seeds this year, but was happy to find the Calendula flowers the other day. Thanks!