Weddings & Creativity in the Garden 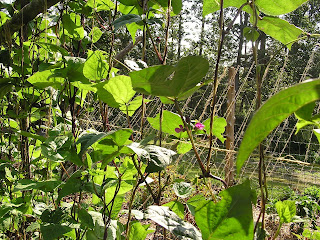 Joseph & I have been to 2 weddings recently. Yesterday's was my niece's, my brother's oldest. It was a beautiful morning wedding at Tuscany Gardens, a pretty, flowering spot with flowing waterfall to accompany their vows. Joseph has had to use his creativity again in the garden, as the Christmas Lima seed he got turned out to be running beans, instead of the bush beans they were labeled as. He had planted them alongside the Trionfo Violetto green beans, which were runners, & didn't want them getting all tangled, so made a trellis which comes out at an angle away from the others. Kinda interesting looking, but it should work. I love the Trionfo Violetto's because they're a beautiful plant, with purple stems & beautiful pink blossoms, but also because they make harvesting so much easier, having purple pods instead of green.
Posted by Laurie at 2:46 PM