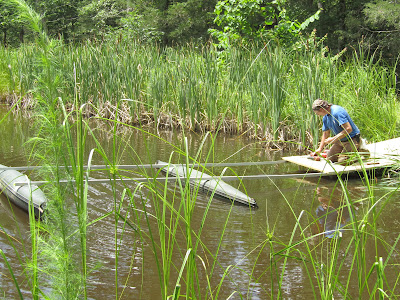 Hello, friends.  Happy first week of summer, as odd as this one may be.  Our first beets and tromboncino squash were harvested last week.  One dinner was all homegrown, except for apples, used in an apple beet salad, and onions, used in sauteed squash and to season lima beans.  I'm also harvesting blackberries, purple pole beans, blueberries, yellow squash and zucchini, and gathering calendula and coreopsis flowers.  I made my monthly grocery run, and picked up library books.  Aldi's had avocados for .65, so I got 6.  I redeemed a $5 reward at Walgreens and bought gloves.  I also coordinated picking up my soaps from a gallery in town.  Many were beyond the 6 month date I like to sell them by, but some were not, so will be added to the shelf for possible online sales. Two bars were shared with our son.

I picked a bouquet.  It seems to be getting harder to find sugar-free ketchup here, and when I do, it's really expensive.  So, I made my own, using this recipe.  I tweaked it, after reading the comments, using less mustard, and adding onion powder.  I was light on the spices, and added a few drops of stevia.  We both thought it was pretty good, after sitting overnight, and so much cheaper to make.  I'm working hard on using the squash that's coming in.  One day, I made a raisin zucchini bread we like, and froze one of the loaves.  I tried a new recipe for low country vegetable pie, which used both yellow and zucchini squash, and we thought it was good.  When the pups saw the holistic vet in February, he mentioned golden paste, a turmeric, coconut oil and black pepper mixture, which I'd never heard of.  My notes from the visit got lost in a pile of paperwork, and were just found again, so I made a batch this week, which the pups seem to like. 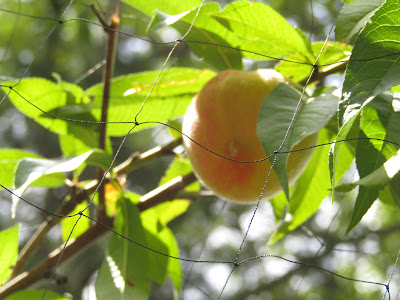 J started working on one of the projects on his to do list, and finished it in a few hours.  He's going to add an inner tube close to the shore, to stabilize it a bit more.   We now have a dock with ladder going out into the pond.  I bought floats for our GD and I, as well as a life vest for quick dips.  I hope the fish aren't too frisky around my legs.  Ha!  While J was weeding in the garden, he saved purslane for me.  Before he started mowing, I went and gathered more, then made a double batch of purslane pistachio pesto.  There have been no critters entangled in the netting around the peaches, since I added the second row of contractor's tape.  I'm so happy that it's working.  One morning, when M went to open up the chickens, he found a copperhead in with the blind rooster, which he dispatched quickly.  Life in the country!  Lambs quarter has been gathered, and some more frozen.  My friends at Whynot Pottery allowed me to come and make some of my clay pumice stones.  The stones only need a final firing, before they're finished.  We all wore masks, and Meredith and I visited while we worked.  It was nice to be somewhere other than home for a change.  I brought squash to share. 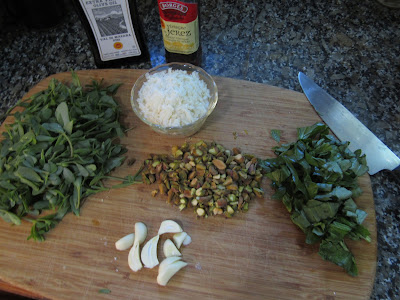 Batches of yogurt and hummingbird food were made.  We harvested our first corn.  They're pretty small ears, but we're delighted to have any at all.  I harvested dill to go in our potato salad.  I'm making a little progress with my guitar playing, now that I was lent a left handed guitar to try, which is encouraging.  The cucumbers are growing slowly.  I hope to be gathering some later this week.  The Japanese beetles have been picked and given to the chickens daily, often twice.  A jar of sprouts, and a small jar of sauerkraut were started.  The pups were given baths in the outdoor shower.  Neither of them wants a bath at first, but afterwards, they zoom around because they feel so good.  Silly boys.  Wishing you a most lovely week and Fourth of July.

I have a recipe for fermented ketchup, if you're interested. It's quite tasty and has the added benefit of fermentation. I'm gonna try the one you listed, as our boy cannot have ketchup made with white vinegar.

It's so rewarding eating out of the garden, isn't it? Feeling so blessed.

Have a safe holiday!

Yes, I'd love the fermented ketchup recipe, Daisy. Thank you!

Sugar-free ketchup for real!!!! Seriously!!! I haven't had any since we moved out of the city 15 years ago and are no longer close to a health food store. I will be trying this recipe soon along with a big batch of fries. I will let you know what I think.
Jeannie@GetMeToTheCountry

If you're like me, you'll tweak it to your liking. I hope it works for you!

Best statement in a blog ever: "I brought squash to share." My very first zucchini of the year is about a day away from picking and that comment resonated with me!

Wishing you a bountiful squash harvest!