A Doozy of a Day & Frugal Accomplishments 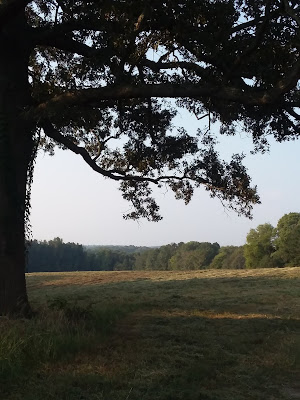 Hello friends.  I forgot to mention last week that friends that visited brought us large bags of tart dried cherries and dried cranberries.  They were put in jars to store in the pantry.  I cut up one of our peppers, and sauteed corn with it and a clove of garlic. Speaking of garlic, ours has been languishing on a table on the porch since harvest.  I'd been cleaning a few heads at a time as I needed them.  I finally got around to cutting the roots and cleaning the majority of them, before a blister caused me to stop. Seed was harvested from carrot plants.  I enjoyed an outdoor shower.  Though the days are remaining quite hot, the nights are cooling off enough to open up and let the cool air in.  Some nights, the temperature in the house only drops 1 degree, but having fresh air and not having to use the a/c is a definite plus.

I decided to try something new with the corn and pepper leftovers, leftover roasted potatoes and herbs, and a zucchini orzo dish.  I mixed them all together with an egg, some flour, cheddar cheese and garlic powder, and made fritters.  We had J's son for dinner, and we all agreed they were quite tasty.  I'll have to remember that when we have dribs and drabs of leftovers.  I had a frugal fail on Monday, when after hours of chopping the night before, and a few hours of simmering, I scorched a batch of pear preserves.  Bummer.  On Tuesday, I made pear sauce.  I'm used to eating unsweetened apple sauce, but this batch was pretty bland.  The next day, I added vanilla and lemon juice to another batch for more flavor.  For about half of the pears, I was able to use my apple peeler/corer, but the rest had spots that needed cutting out.  I'd read of people who steam them, and decided to try that, to take care of the problem of scorching.  It worked great.  The first day, I used the blender to turn them into sauce, which worked fine, though I did it in small batches, and poured them directly into the jars without tasting.  The next day, I sauced the whole batch in the pot with the immersion blender, then seasoned it before putting it in jars.  I'll do that again.  I've tackled all the pears, except for a handful, which we'll eat fresh.  Yay!

A book I requested from the library came in.  When I requested it, I was 9 in the queue, so had no idea when it would be available.  I won't be in town until next week, where the main library is, so asked them to send it to the local library.  They run couriers between the libraries daily, and it saved me a trip to town.  I save all our corks for the local orchid grower, and dropped them off while passing by on an errand.  Pasta Norma was made with our herbs and veggies.  I chopped and froze some of our sweet peppers.  I harvested cucumbers, pawpaws, eggplant, peppers, tomatoes, green beans, squash, figs, lettuce and lima beans.  Tomatoes were canned.  Our lettuce, cucumber and tomatoes were used in a salad, and homemade dressing made from pantry items.  I learned that our phone company began giving all customers free caller ID this month, so called and set that up.  We've gotten into the habit of often letting the phone ring, as so much of it is robocalls, so this will help.

The requested book was picked up.  For a dinner, I made a tomato rice loaf and squash dish, using our vegetables and herbs.  A friend visited, and gifted me several books, a sweater, shawl and scarf.  I worked in the garden, cutting back dead leaves and vines of cucumbers, squash and tomatoes.  The heat and drought have taken their toll, as well as it being time for things to begin dwindling.  I hope the pruning will help things produce a bit longer.  I gathered more basil than needed for a recipe, so the extra chopped basil went into an ice cube tray, was covered with water, and frozen.  I made a batch of yogurt.  Eggs were boiled for us and the pups.  After working on firewood, J & I enjoyed a night out, meeting friends for dinner and a concert.  J worked on the refrigerator again, and so far, it looks like this time fixed it.  There was one day that was a real doozy, but we made it through intact.  Life is always interesting, that's for sure.  Wishing you good things in the week ahead.

Those fritters sound amazing! What a great use for any leftovers. It gets old eating them the same way all the time.

It certainly sounds like you have frugality down to a tee. I admire anyone with that skill.

Hope the rest of your week is going well.

The fritters were really good. I hadn't thought to do that before, but glad I did. Always trying to learn new things!

It sounds like your garden is still giving you lots of good food! It's a good time of year to use up the bits and pieces, and I'm always looking for new ways to make that "ole zucchini" taste new by this time of the summer! So, great creativity on your leftover veggies:). It's the time of year where we have to remind ourselves to breathe!

Well, I did research the fritters online before coming up with what I thought was a good combination. I'm with you. Using up all the bits and pieces is trying at times.